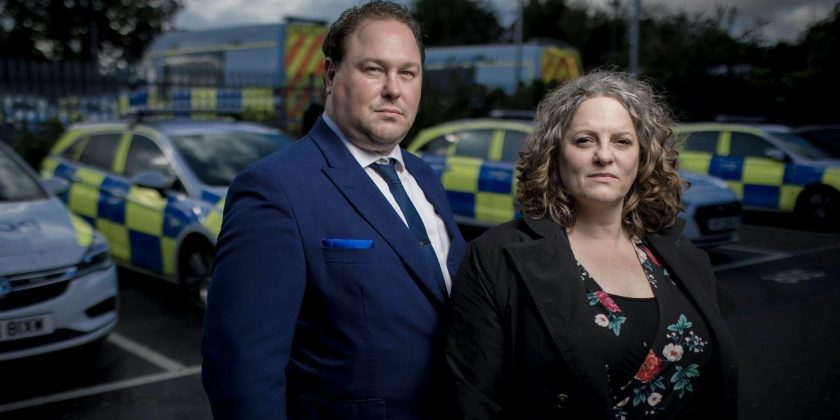 Channel 4’s Rape – Who’s On Trial is the all-female produced documentary looking at how sexual crimes are processed, from the initial reporting stage to seeking justice.

As conversations around violence against women highlight the failings of the Metropolitan Police, a new Channel 4 documentary airing tonight takes an inside look into rape and serious sexual offence cases.

The new documentary, which follows Avon and Somerset police, focuses on four different cases. For those familiar with 24 Hours In Police Custody, the on-the-ground format of the show will be familiar. Body-cam footage, emotionally charged dispatcher phone conversations and tense interview room sequences are all pieced together to show viewers how rape cases are handled, every step of the way.

Filmed over two years, we follow the cases from the moment they are reported right through to the end of their journey within the criminal justice system. While it can make for an infuriating watch because of the dwindling sense of fairness, the focus within the documentary is on the victims’ accounts and stories in their bid to get justice.

Here are five things we learnt while watching the new Channel 4 documentary.

Digital strip searches: why this small change to the PCSC bill means a huge deal to rape victims

“Rape or serious sexual offences now make up 71% of what our detectives deal with.”

Deputy Chief Constable Sarah Crew is one of the main authoritative voices in the documentary and is also the lead police officer for rape in England and Wales. With one in four women having been a victim of sexual assault, Crew accepts the criticism that the police and Crown Prosecution Service (CPS) have received in recent times.

Although she admits that rape is one of the most difficult crimes to investigate – “quite often, it’s one word against the other” – Crew says that serious sexual crimes do make up most of a detective’s work.

“The public’s perception may be that detectives are dealing with things like armed robbery, organised crime groups, fraud and cybercrime – yes they do, but the biggest proportion of their work is for sexual abuse of some form or another.”

She mentions that the rate of reporting sexual crimes has climbed in the last five years but the rate of conviction is steadily declining: just over 1% of rape cases end in a conviction. “It’s bitterly disappointing,” Crew says.

Another serving Metropolitan police officer has been charged with rape

Fewer than 20% of rape victims go to the police

Often, as the documentary highlights, rape victims feel that their cases won’t make it to court and, therefore, don’t proceed with reporting it to the police.

The episode highlights the statistic that “only 14% of rape victims feel they can obtain justice by reporting to the police.”

The process of obtaining a conviction is a lengthy one, especially in cases with limited amounts of evidence. We see that from a lack of CCTV or DNA evidence, for example, cases regularly don’t meet the CPS’s evidential points-based system.

Deborah’s case, for instance, which sees her report an alleged sexual assault in a pub’s toilet, doesn’t make it to the CPS stage. As the police officer on the case states after viewing the limited CCTV footage: “The problem’s going to be convincing everyone else.”

Although multiple interviews were conducted and the police obtained her phone, there just wasn’t enough evidence. Deborah remarks: “I wish I hadn’t reported it because it affects your life so much, and then to get a phone call to say it doesn’t meet their point threshold is just like, OK, yeah.”

As is mentioned throughout Deborah’s case, a shockingly low number of rape cases are actually referred to the CPS, which will then see the case tried in court.

For Deborah, picture messages and the word of the defendant meant that mutuality can be argued as a defence. As well as not meeting “the evidential threshold for a CPS charging decision”, the likelihood of a rape case reaching the CPS remains staggeringly low.

One of the investigating officers states:

“Unfortunately the system we’ve got isn’t a fair system – but on one side, I suppose you can say it is because it means that innocent people don’t get convicted for things they haven’t done and it’s innocent until proven guilty.

“The burden is on us to prove, beyond doubt, that the person is guilty of this. Which, in a way, is not fair against you [the victim] because unless we’ve got that evidence, you’re not going to get justice.”

As part of the evidence collection, Deborah’s phone was taken in by the police. As the title of the documentary suggests, this action left Deborah questioning who was being investigated.

“I felt like I was – a little bit – on trial. I was thinking, are they looking at my life? What are they potentially looking for?”

Cops On Trial: why everyone is talking about this damning Channel 4 Dispatches documentary into abuse of women by police officers

While lack of sufficient evidence is a major contributor to a rape case not going to court, there are other factors at play. Many victims do decide that pursuing the case “isn’t for them” for a number of reasons, Deputy Chief Constable Sarah Crew explains.

It’s a cycle and system that needs to change. Crew adds:

“If cases don’t get to court, the precedent doesn’t get set and more victims lose the chance to see justice done.”

Women’s safety: the proposed 888 service to protect women walking home has been met with criticism online

The average rape investigation takes more than two years from report to trial and we see exactly that within the documentary. One of the cases, which focuses on Lucy and her friend being allegedly raped in a hotel room, returns a not-guilty verdict after a lengthy investigation.

The investigating officer admits that he didn’t see it coming but does concede that “even the strongest evidential cases can return a not guilty verdict – that’s the jury system.”

Lucy is seen distraught at the end but impassioned to spread the message of her case wider.

“Society is the problem in this – it’s only when people start shouting about something that people start to listen.”

“We are working really hard to make sure that we conduct a fair, thorough and open-minded investigation that gives them the best possible chance of seeing their case reach a courtroom.”

“We can’t have a criminal justice system that is finding itself unable to deal with it.”

Rape – Who’s On Trial will air on Channel 4 on Monday 8 November at 9pm. It will also be available to watch on All 4.