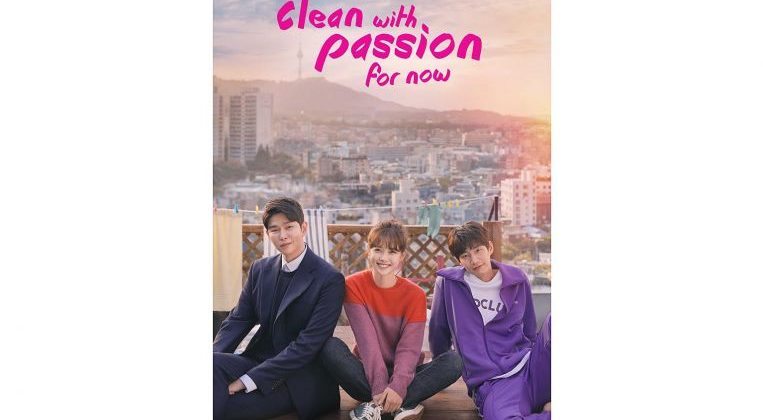 It was a ratings hit and won popularity awards for both its leads at the Baeksang Arts Awards.

The former on-screen lovers are now fighting for eyeballsin separate shows – Park’s romantic drama Encounter and Kim’s romantic comedy Clean With Passion For Now are out at the same time.

Encounter also boasts Song Hye-kyo, who is making her highly anticipated return to television after her marriage to Descendants Of The Sun (2016) co-star Song Joong-ki.

But despite the double dose of star power, I find myself enjoying Clean With Passion For Now more.

That is not to say that Clean’s cast is a clean slate.

She played a eunuch in disguise in Love In The Moonlight and here, she is cast as the slovenly Gil O-sol, a former student athlete finding out that it is not so easy to leap over life’s obstacles (“I’d jump over all the hurdles in front of me… But I keep falling these days.”).

A laugh-out-loud moment in the first episode had the game actress wearing a horse-head costume and sprinting down the street with a trash cart. It was both a desperate and ridiculous situation as O-sol was trying to avoid getting spotted by the man she had a crush on while covering for her father.

After many attempts, she finally lands a job at a cleaning company run by Jang Seon-kyul (Yoon), who is good-looking and wealthy – and also a germaphobe.

Despite his aversion to the unkempt O-sol (who nevertheless has glowing skin) in their initial run-ins, he finds himself constantly thinking of her after she kisses him in a bid to thwart some unwanted attention. But first, he faints from the shock at the thought of all the bacteria and disease she could have passed to him.

Yoon nails it as the normally poised boss who somehow ends up losing his cool in his encounters with her, including a sequence in which Seon-kyul drives a drunk O-sol home, deathly afraid she might throw up at any moment.

Director No Jong-chan (Personal Taste, 2010) finds a nice balance of humour, romance and drama – working in observations of society such as the difficulty for young people of getting a job – in this entertaining adaptation of the popular webtoon of the same name.

Encounter is also about opposites attracting, but it has a very different vibe.

Song Hye-kyo plays Cha Soo-hyun, a woman who has always lived under the spotlight, first as the daughter of a prominent politician and later as the daughter-in-law of a wealthy family. Even after her divorce, Soo-hyun, now running a successful chain of hotels, has obligations to her formidable mother-in-law.

In Cuba for business, she meets the younger, carefree Kim Jin-hyuk (Park) by chance and they spend an enchanted evening together in Havana. Later, back in South Korea, Jin-hyuk finds out he has been employed by her company.

There is a chilliness to Song’s beauty that suits the role, while Park’s good-natured sunniness is a perfect fit for his character.

But their pairing did not quite work for me in the first episode.

Having snagged Cuba as a filming location, director Park Shin-woo (Jealousy Incarnate, 2016) and screenwriter Yoo Young-a (Like For Likes, 2016) seemed content to let the exotic location do the heavy lifting when the focus should have been on the characters instead.

Things improve in the next episode with Park (Reply 1988, 2015 to 2016) exuding his charm front and centre with close-ups and ice-melting smiles. A character remarks that Jin-hyuk is so good-looking that he could afford to be a little mean.

But she misses the point – niceness is at the heart of Park’s wholesome appeal.

CLEAN WITH PASSION FOR NOW