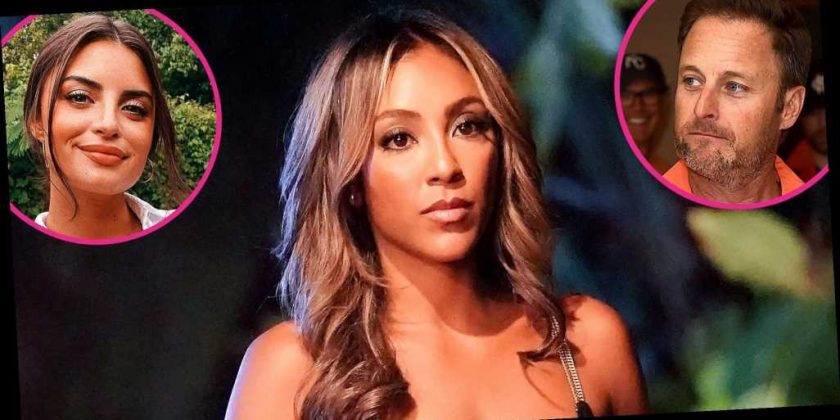 Speaking out. Former Bachelorette Tayshia Adams voiced her concerns with Chris Harrison’s recent problematic defense of Rachael Kirkconnell — a Bachelor contestant on Matt James’ season who has come under fire for past racially-charged actions.

“This hit me on a different level just because I’m the current Bachelorette, if you will, the first bi-racial lead. I definitely will say watching that interview, my eyes were wide open. My jaw was kind of to the floor just because it was an ongoing conversation that was just filled with so much defense and what I feel is ignorance,” the California native, 30, said on her “Click Bait With Bachelor Nation” podcast on Friday, February 12. “To be clear, really, all I think everybody was looking for was accountability in the sense of just saying the images that have come out are wrong. Bottom line, they are wrong. There was no sense of ‘what she did was wrong,’ and I feel bad that Bachelor Nation is going through this and this is making a lot of people feel attacked in a way.”

Harrison, 49, received backlash for failing to properly address Kirkonnell’s social media controversy. The Georgia native, 24, has faced multiple accusations regarding racially-charged misconduct, including allegedly bullying a girl for her attraction to Black men and attending an antebellum plantation-themed formal.

In the longtime Bachelor host’s interview with Extra correspondent and former Bachelorette Rachel Lindsay, Harrison called for “compassion” and “grace” for the controversial contestant. His comments additionally resulted in multiple petitions calling for his removal from the ABC franchise.

Adams said that she feels “so bad” for Lindsay, 35, because of the way she was “put on the spot” during her discussion with the former Who Wants to Be a Millionaire host. “I feel like her composure and the way that she conducted that interview was not because she didn’t feel angry or frustrated in any way. It was because she had to conduct herself that way or else the message would be lost if she were to show her anger,” the former phlebotomist said, noting how it was “a really eye-opening conversation” that she’s “truly disappointed” in.

“Outside of the franchise, him and I have formed a friendship. I’ve had a great time with Chris Harrison in the past and I think that’s why I’ve felt so saddened by this entire interview because when I say it hit a different way it’s because — would you come to my defense like if someone did this to me? Like, being your friend you know?” she wondered. “I’m sad about it.”

She added that “we all make mistakes” and noted that the problem is “the continued defensiveness.” Adams said, “I know Chris has a really good heart and I do love him as a friend, but this is a big learning experience.”

Many Bachelor Nation stars have spoken out in wake of the scandal, including the men who competed on Adams and Clare Crawley’s season last year. They issued a joint statement where they declared to be “united in denouncing racist behavior and any defense thereof.”

Harrison took to Instagram on Wednesday, February 11, to apologize to Bachelor Nation for the misinformed stance he took.

“What I now realize I have done is cause harm by wrongly speaking in a manner that perpetuates racism, and for that I am so deeply sorry,” he wrote on the app. “I also apologize to my friend Rachel Lindsay for not listening to her better on a topic she has a first-hand understanding of, and humbly thank the members of Bachelor Nation who have reached out to me to hold me accountable. I promise to do better.”

The following day, Kirkconnell broke her silence by addressing her own missteps. “I was ignorant, but my ignorance was racist,” she wrote via Instagram. “I am sorry to the communities and individuals that my actions harmed and offended. I am ashamed about my lack of education, but it is no one’s responsibility to educate me. I am learning and will continue to learn how to be antiracist, because it’s important to speak up in the moment and not after you’re called out.”

The graphic designer additionally shared a joint statement that was written by her castmates from season 25 of The Bachelor. In the note, the ladies wanted to “make it clear that we denounce any defense of racism.”

James, who is The Bachelor’s first Black lead, shared his support for Lindsay in his Instagram Stories response on Friday, writing, “I am beyond grateful to have Rachel as a mentor during this season. Your advocacy of BIPOC people in the franchise is invaluable, I stand with you and the rest of the women advocating for change and accountability.”