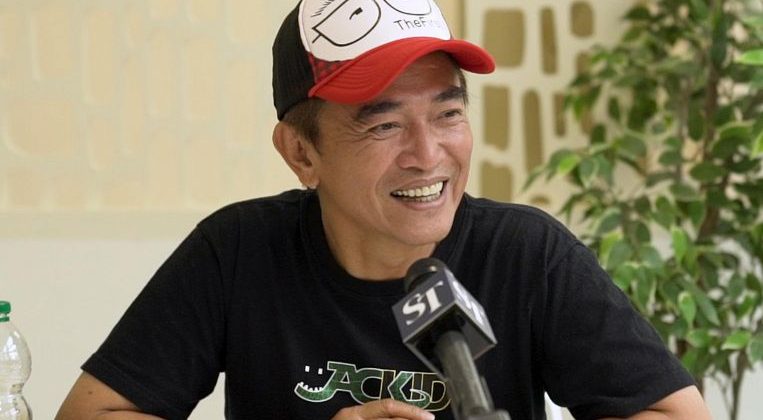 SINGAPORE – Taiwanese entertainer Jacky Wu is one of the most successful and well-known variety show hosts in Chinese-language entertainment. Yet, he has led an “unhappy life”, he says.

Speaking to The Straits Times and other local media recently, he says in Mandarin: “I have spent too much of my time just working and earning money, and for what? I have not been able to enjoy life.”

Which is why he repeatedly tells his children to work less and have more fun, he says. Wu has four children – Sandy, 28, with whom he co-hosts the variety show Super Followers (2016 to present), as well as Vivian, 26, Olivia, 23, and Rick, 20.

“I would never want them to end up like me. Of course, I want them to do well, but they do not need to be as extreme as me,” says the 56-year-old, who says that he often wakes up at five or six in the morning and works until well past midnight.

He can certainly be protective of his kids.

His son Rick had joked on Instagram that he would bomb Taipei City Hall if his girlfriend did not recover from an illness. Even though Wu had held a press conference last August (2018) to apologise for the controversial post, he hopes that the public can now move on.

He adds: “I’m not saying that what he did was right, but he had posted that only for his friends to see. He got in so much trouble mostly because he is Jacky Wu’s son. As a son or daughter, you have to choose your parents wisely.”

The veteran entertainer, who has been in the business for three decades, is currently the host of three popular variety shows: Super Followers, Mr. Player (2014 to present) and Hot Door Night (2013 to present). He and his daughter were named Best Variety Show Hosts at Taiwan’s Golden Bell Awards for Super Followers in 2016, while he was awarded Best Game Show Host at the same awards for Mr. Player last year (2018).

Previously, he was known primarily as a singer and music producer with over 25 albums to his name. His 1999 song Rooftop, a romantic duet with Taiwanese singer Landy Wen, remains a popular choice at karaoke sessions.

He can also be credited as the man who discovered Taiwanese superstar Jay Chou.

Wu thus proudly declares himself to be the “most hardworking guy in show business”.

When a reporter points out that Hong Kong superstar Andy Lau is often cited in the media as the most hardworking celebrity, he immediately brushes off the notion.

“I’m much more hardworking than him. Andy Lau sings and acts – and I’ve done all of that, too. But I also host so many variety shows and manage so many businesses,” says Wu, who was in town to attend some work meetings for vacuum cleaner brand Delphin. He heads the company’s Taiwan business.

He also runs several other businesses, including restaurants, gyms and an artist management company.

Last July (2018), he held his first solo concert at iconic Taipei Arena and both his shows were sold out within minutes.

“I was a little worried no one would buy tickets. When I tried to get into the website, it didn’t work, so I thought that the site had malfunctioned. I called my manager to get it fixed but he told me that it’s actually because the tickets were all sold out.

“It’s amazing that so many people still want to hear me sing,” says Wu, who will be holding the concert in Kaohsiung, Taiwan, in May. He adds that he would love to bring the show to Singapore someday “if fans here want to see him perform”.

It does not sound like he is slowing down at all this year.

“I don’t really know how to stop, but I will try my best. It’s time I learn to enjoy my life,” he says.