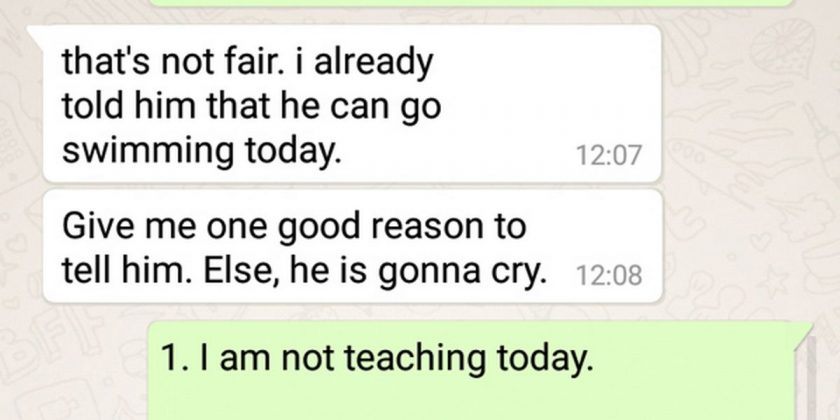 There’s nothing worse than when you try and do something nice for people, but it comes back to bite you anyway.

Over on Reddit, a generous swimming teacher offering free lessons for kids shared a shocking barrage of unkind messages from a mum who wasn’t happy that the classes weren’t when she wanted them.

The mum messaged the teacher asking if her son could join the free lessons as a friend had told her about them, before asking what time she should arrive at the pool.

The teacher explained that she was at work so wouldn’t be able to immediately respond and wasn’t teaching that day, but would let her know when the next lesson is so her son could join.

The conversation quickly took an unpleasant turn when the mum said she knows the teacher has "flexible timing" and demands she "reply faster" and meet her son at 1pm that day.

Here’s how it happened. It’s obviously a frustrating situation if you’ve said to your child they’re going to go swimming and then you realise that’s not going to happen.

The mum then appears to take out her frustrations on the teacher, and starts to call her names like "b****" when she doesn’t immediately reply and concede to giving her son a "exclusive" lesson as she requested.

When she realises that he wasn’t going to get a lesson that day, she then demands the teacher shows up the next day instead at her specified time – the teacher explains again that she can’t go to the pool every day and doesn’t teach anyone exclusively.

After the teacher stops replying, the messages start to become more unpleasant.

The mum writes to say she is going to "throw [her son] in the pool tomorrow" and the teacher is responsible for what happens in a bid to get her attention, before calling her more names.

According to the messages, the mum feels like the teacher should ask for money from the other parents, who she considers more privileged than herself, and then give it to her as she thinks the teacher doesn’t need it.

The post on Reddit went viral, and has over 7000 comments from people who were shocked by the exchange between the two people.

One wrote: "Wow, I lost it when she was gonna throw the kid into the pool and then blame you if he drowns."