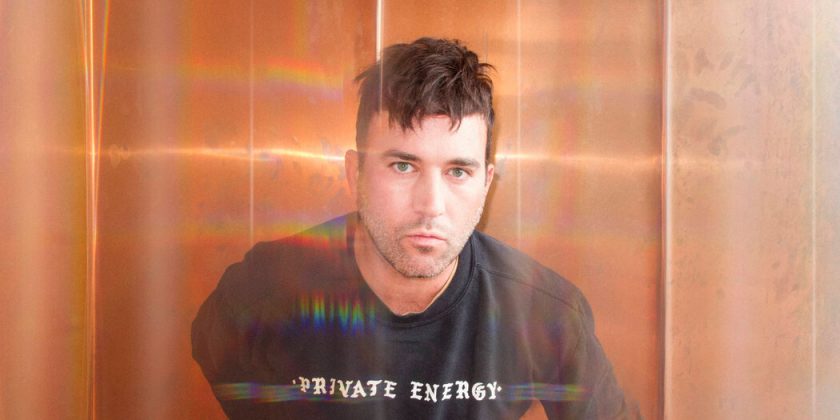 “The Ascension,” the new album by Sufjan Stevens, sounds gigantic. It should. It speaks to a convergence of crises: romantic, political, spiritual, existential. Stevens recorded the album largely alone over the past two years with his computer, drum machines and synthesizers; he’s his own producer and engineer. Its songs are by turns wounded and angry, solitary and desperate for human contact, haunted by death and desperate to live on and find purpose. The lyrics invoke heartache, malaise, wrath, ancient legends and the Bible; the music opens up cavernous expanses and also goes boom.

When Stevens announced the release of “The Ascension,” he stated that the album’s “objective” was “Be part of the solution or get out of the way. Keep it real. Keep it true. Keep it simple. Keep it moving.” That suggests something blunt, topical, strident and one-dimensional. It’s not the album he made.

As usual, Stevens conjures meanings where memories, faith, history, dreams and longing overlap. The album is both a cry of despair and a prayer for the redemption he’s no longer sure he will find. In “Run Away,” a shimmering, messianic love song, he urges, “Come run away with me” and promises, “I will bring you life, a new communion/With a paradise that brings/the truth of light within.” But in “Tell Me You Love Me,” he laments, “I lost my faith in everything,” and adds, “Right now I could use a change of heart/Or a kiss before everything falls apart.”

His new songs often sum themselves up in succinct refrains like “I don’t wanna play your video game” (“Video Game”) or “I am the future, define the future” (“Lamentations”). And Stevens can deploy his drum machines to hit deep and hard; “Video Game,” “Death Star” and “Goodbye to All That” have the impact of 1980s synth-pop, topped with Stevens’s own ethereal overlays. So “The Ascension” stands as the poppiest album in Stevens’s huge, multifarious catalog — but that’s only relative.

Over the two decades since he released his debut album, “A Sun Came!,” in 2000, Stevens has recorded elaborate orchestral vignettes based on local lore (“Illinois” and “Michigan”), devotional meditations set to bare-bones banjo (“Seven Swans”), classical piano pieces (“The Decalogue”), Christmas-carol collections and his most recent album of new songs, the 2015 “Carrie & Lowell,” a whispery, quietly touching evocation of his parents’ lives.

“The Ascension” leaps to an opposite extreme: synthetic and outsized rather than intimately acoustic, metaphysical instead of biographical. It partly harks back to Stevens’ 2010 album, “The Age of Adz,” which embraced excess, piling synthesizers atop orchestras, choirs and rock band. Compared to that album, “The Ascension” is single-minded, but far from simplistic.

Most of Stevens’s new tracks are thickets of counterpoint, dissonance and noises that can be comic or ominous. And he never reduces his messages to preaching or polemic. He longs to believe, but isn’t sure he can; he confesses to personal failings as he lashes out at cultural ones, and he finds no guarantees of hope. “Die Happy” repeats just one line — “I wanna die happy” — as the music brings out all the ambivalences of that sentiment: tinkling prettily and floating on celestial voices, later detuned and distorted and marching toward death.

The album opens with “Make Me an Offer I Cannot Refuse,” a ballad-like melody that’s accompanied at first by reverent, organ-like chords. Then it’s simultaneously cushioned and besieged, with chime and harp tones, otherworldly voices, ratcheting and rumbling percussion, staticky glitches and increasingly intrusive high-frequency beeps that eventually register as alarms. “Lord, I need deliverance,” he pleads. The title song of “The Ascension” places the narrator on his deathbed, consumed with regrets. “To everything there is no meaning/A season of pain and hopelessness,” Stevens sings. “I shouldn’t have looked for revelation/I should have resigned myself to this.” He awaits his own ascension but is consumed in doubt; the song ends not with rapture but with a repeating question: “What now?”

As the album proceeds, Stevens is as accusatory as he is humble. In “Death Star,” over a sculpted, popping beat that Depeche Mode would happily claim, Stevens confronts a looming environmental disaster as a real-life apocalypse: “Death star into space/What you call the human race/Expedite the Judgment Day/It’s your own damn head on that plate.”

The album’s finale is “America,” a 12-minute, four-chord, mournful indictment. Reversed keyboard chords swoop into earshot; a patient beat is built out of static and, eventually, drum-kit sounds. “The sign of the flood or one more disaster?” Stevens asks. For the chorus, repeating and building to symphonic richness, he warns, “Don’t do to me what you did to America,” distantly answered by “Don’t do to me what you do to yourself.” Is Stevens addressing the president? Russia? Social media? Late capitalism?

Words disappear for the last five minutes of the song, giving way to sustained, ambiguous chords, inhuman electronic tones and a sensation of gradual free-fall; at the end there are glimmering arpeggios and a disembodied choir. But there’s no resolution, no salvation. There’s no promise of a happy ending anytime soon.