Welcome to Best of Late Night, a rundown of the previous night’s highlights that lets you sleep — and lets us get paid to watch comedy. We’re all stuck at home at the moment, so here are the 50 best movies on Netflix right now.

Late-night hosts got serious Wednesday after an angry, violent mob of Trump supporters stormed the Capitol, where lawmakers had convened for what is normally the routine certification of the presidential election results. Stephen Colbert went “unexpectedly live,” addressing the Republican leaders he deems responsible for supporting President Trump’s desperate attempts to overturn Joe Biden’s victory as well as his inflammatory rhetoric.

“Hey, Republicans who supported this president — especially the ones in the joint session of Congress today — have you had enough? After five years of coddling this president’s fascist rhetoric, guess whose followers want to burn down the Reichstag?” — STEPHEN COLBERT

“Who could have seen this coming? Everyone? Even dummies like me. This is the most shocking, most tragic, least surprising thing I’ve ever seen.” — STEPHEN COLBERT

“For years now, people have been telling you cowards that if you let the president lie about our democracy over and over and then join him in that lie and say he’s right when you know for a fact that he is not, there will be a terrible price to pay. But you just never thought you’d have to pay it, too.” — STEPHEN COLBERT

“I really do hope you’re enjoying those tax cuts — and those judges, because those judges are really going to be working hard. They’re going to be busy throwing these idiots in jail — and by ‘idiots’ I include the Republicans who let this happen. Like you, Senator Josh Hawley, raising your stupid fist to the mob outside the Capitol. Look at that — it’s like ‘Black Power’ but the opposite. There really should be a name for that. And, obviously, he has to keep his fist closed, because if he opened it, you’d see all the blood on his hands.” — STEPHEN COLBERT

“Being here tonight and talking to you at home and reassuring you that we’re going to be OK and that this is not what our country is about is how I can help,” he said.

Fallon spent the top of the show speaking with Dan Rather, the former CBS News anchor, about the day’s events.

James Corden said there was still reason for hope during what he called “the last dance at the worst party any of us have ever been to.”

“The America that so many aspire to will be back,” he said. “It’s just been hijacked by a lunatic.”

“Remember this morning the news was all saying Democrats now control the Senate? I’m going to say that report was a little premature. ‘The Late Show’ is ready to project Senate control has passed to Majority Leader Shirtless Freak in a Viking Hat.” — STEPHEN COLBERT

“Thank you for joining us for the treason finale of the Donald Trump era.” — JIMMY KIMMEL

“It’s a horrifying day that will go down in U.S. history, however much longer that is.” — STEPHEN COLBERT

“The Capitol was besieged by MAGA-hatters in all manner of crazy costumes. It was like a psychotic ‘Price Is Right’ audience forcibly taking control of the ‘Plinko’ wheel.” — JIMMY KIMMEL

“And the wildest part is these MAGA marchers think Donald Trump cares about them. He doesn’t care about you. He doesn’t care about your wife or your job or your health care or the air you breathe, the water you drink. He cares about himself. And only about himself. Unless you were pushing a lawn mower, he wouldn’t let you into his golf club. He’d roll his limo right over you to get a Chick-fil-A sandwich.” — JIMMY KIMMEL

“He does not give a damn about you. He went home to watch it on TV. You’re just entertainment for him — and, of course, a steady stream of merchandise sales.” — STEPHEN COLBERT

“Anyway, this isn’t how any of this works. We don’t decide elections on who’s most upset; we decide them by who gets the most votes, portioned by state through a weird Electoral College that was instituted to maintain the political power of slave states. It’s a long story.” — STEPHEN COLBERT

“Come on, Republicans. Don’t go up to Capitol Hill for a government handout. Pull yourselves up by your own bootstraps and just work a little harder.” — STEPHEN COLBERT

“Remind me: Are we great again yet?” — STEPHEN COLBERT

Don Cheadle managed to talk a little bit about the return of his Showtime series “Black Monday” on Wednesday’s “Tonight Show.”

The author Fran Lebowitz will tell Seth Meyers about her new Netflix series with Martin Scorsese on Thursday’s “Late Night.” 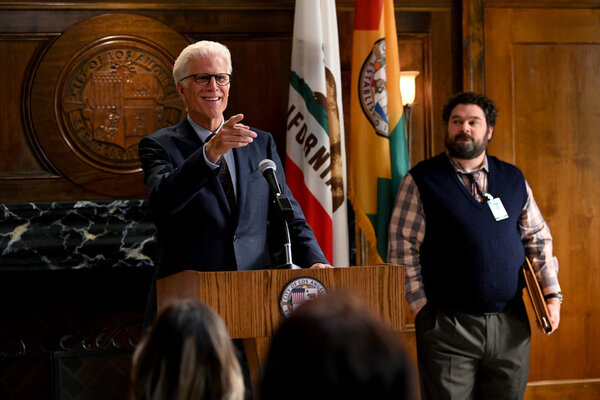