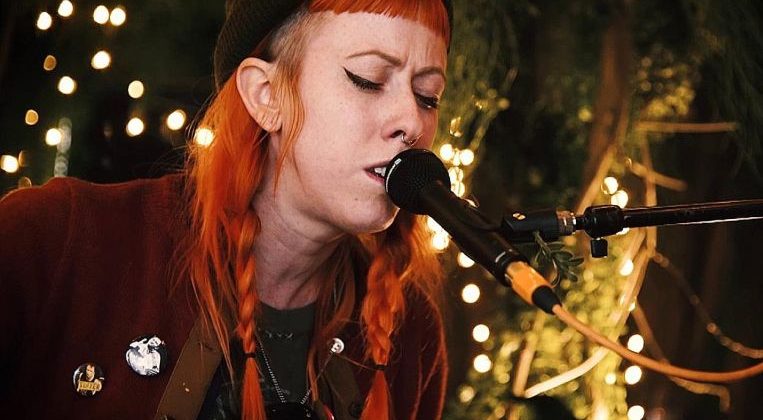 Do not judge a book by its cover: Los Angeles songsmith Shannon Lay makes understated music that does not match her electric tangerine locks.

On her two solo albums, she proffers indie folk you cannot quite place. The 28-year-old’s spectral quality is often associated with that of British folk legends of yore such as Nick Drake and Vashti Bunyan, but there is an urban toughness which brings to mind less of snowdrops and daffodils and more of city sights and neon lights.

That streetwise sensibility may have been honed in her other gig as the guitarist of a noisy, garage-punk outfit called Feels, but the results here are nonetheless stunning – lucid without being-in-your-face. She is reassessing her life, her youth and her relationships, but with a quiet wisdom beyond her years.

Her latest release is an in-studio live recording by Audiotree, a Chicago-based music discovery platform dedicated to helping “up-and-coming artists be seen and heard”.

It is just voice and guitar, presumably the instrument she once deemed a “cheap-as-hell Jazzmaster knock-off” by the brand Xavier.

A masterclass in less is more – with three songs culled from her 2017 breakthrough album Living Water, two from her 2016 debut All This Life Going Down and two previously unreleased ones, she breezes through them without much fuss or showiness.

Still, the micro changes make all the difference. The original version of Recording 15 is miked up-close, as if she is whispering to a confidante.

Here, space surrounds her. The guitar appears closer than the voice, which echoes throughout. How she goes sotto voce in a significant line, which makes the delivery more devastating: “I’m tired of spilling my life/When there’s no one to pick it up.”

In the chorus, she confesses, matter-of-factly, casually emphasising the second “to” in: “I really just want to give love to you.”

These tweaks pull the rug from under your feet just as you are about to relax in the lovely acoustics.

Similarly, she strips The Moon’s Detriment down to its bones. The buttery cello is gone and all we have is her brisk take, accompanied by some deft axework on guitar. Her voice is lower and all the more affecting. “And I know the song so well/Said to the sun then buried underground,” she sings, and that is that.

Always Room feels airborne, more restless than the original. “There’s always room for a little more/And there’s always reason for a little less,” she rasps, more worldly sounding and, yet, clinging on to pleasure and naivete, however fleeting they may be.

In contrast, she does the opposite with All This Life Going Down. The earlier version is drenched in reverb, as if dunked in a sea.

Here, it is supremely clear and intimate and almost tactile. The guitar circles like a loyal mutt. Her voice rises and falls, stretching each vowel till the magic shines through and you are completely transfixed.