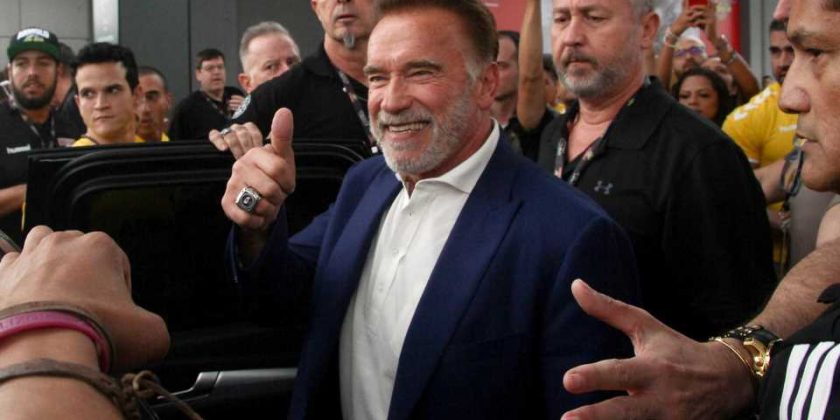 It’s proving to be a wild weekend for Arnold Schwarzenegger in more ways than one. At the Arnold Classic Africa event in Johannesburg, South Africa on Saturday, an unknown man dropkicked Schwarzenegger in the back. But don’t worry — you can’t keep Arnie down for long. After dusting himself off, the former California governor went right back to filming videos of the sporting event for his Snapchat feed. Schwarzenegger later reassured fans he was fine after his encounter with the “idiot.”

A now-viral video caught the whole kerfuffle on camera. Schwarzenegger can be seen filming a group of children jumping rope in an apparent gym when, seemingly out of nowhere, a man takes a flying leap and buries his foot in Schwarzenegger’s back. Not surprisingly, this knocks the 71-year-old star and ex-bodybuilding extraordinaire into the crowd standing before him. Also not surprisingly, security quickly sprung to action to apprehend the assailant.

But the Terminator star doesn’t seem to be sweating the incident too much. Shortly after the video started making the rounds, he posted a message for fans. “Thanks for your concerns, but there is nothing to worry about,” Schwarzenegger tweeted. “I thought I was just jostled by the crowd, which happens a lot. I only realized I was kicked when I saw the video like all of you. I’m just glad the idiot didn’t interrupt my Snapchat.”

The sporting event’s official Twitter page also addressed the incident, saying in a statement, “Arnold Schwarzenegger, who is in Johannesburg, South Africa to attend and promote the annual Arnold Classic Africa, was sadly and unexpectedly attacked by a crazed fan as he was doing a walk-through to support athletes participating in the various sporting codes at the Sandton Convention Centre.”

“The incident happened while Mr. Schwarzenegger was taking a Snapchat video of a gymnastics competition, when an unknown person breached security and proceeded to kick him in the back, in full view of everyone who was both competing and watching,” the statement continued, going on to add that the assailant was handed over to the police. They also revealed that this could possibly be a pattern of behavior, noting the event’s organizer “believes this incident was carefully planned by the offender, as he is known to the police for orchestrating similar incidents in the past.”

As for Arnie, he is “fine and still in good spirits,” the event’s spokesperson confirmed. “He still carried on with the activities as planned and is fully taking this in his stride. He even joked that some people clearly got more excited than others. He will still carry on with his planned activities,” they wrote, pointing out that it’s unlikely the assailant will be prosecuted. “Mr. Schwarzenegger has confirmed that he has no intentions of laying charges. He views this as an unfortunate incident by a mischievous fan.”

It just goes to show that you can’t anticipate everything. Because, as my grandma often said, some people don’t have any kind of sense, y’all.