Not wanting to talk oneself up is a traditionally Swedish trait. There is even a Nordic term for it: jantelagen. But there is precious little room for such decorum in “Snabba Cash,” which depicts a Stockholm pulsing with pushy entrepreneurs, blinged-out cocaine dealers and a tech billionaire (Olle Sarri) who tells a radio interviewer, “I am the system.”

The title of this nervy six-part Swedish series, which dropped last week on Netflix, translates roughly as “Easy Money.” It is as much an ethos to live by for Stockholm’s entrepreneurial jet set, all looking to create the next Spotify, as it is for its criminal underworld.

In both strata, only the most ambitious and ruthless young people need apply.

“The old structures in Stockholm have changed,” the series’s creator and showrunner, Oskar Soderlund, 42, said in a video call earlier this month. “You have the drug trade, and you have an explosion of Swedish tech companies. My older brother works with kids, and every day he meets young teenagers who are really stressed out because they don’t have a plan to make their first million before they’re 25.”

It’s an abrupt change in a country known for its high standard of living, income equality and robust social safety net — a sign of the shifting values, demographics and socioeconomic realities that the series, for all its Nordic noir twists and tensions, seeks to capture.

“The two worlds we’re portraying are, for me, two extreme versions of capitalism,” Soderlund said.

In some ways, “Snabba Cash” is itself an exemplar of hyper-capitalist Swedish success. Beginning with the 2006 novel by Jens Lapidus, which has been translated into dozens of languages, the “Snabba” empire has expanded into a trilogy of novels, three films and a genuine cultural phenomenon in Sweden, sparking street-level slang and Hollywood careers.

Although it relies on many of the same themes as the novels and films, the Netflix series revises the premise significantly: The main character is no longer J.W., a white male student who falls foul of a gang of Serbian drug dealers; she is Leya (Evin Ahmad), a single mother of Middle Eastern descent, who is desperate to find seed money for an A.I. company she has created. 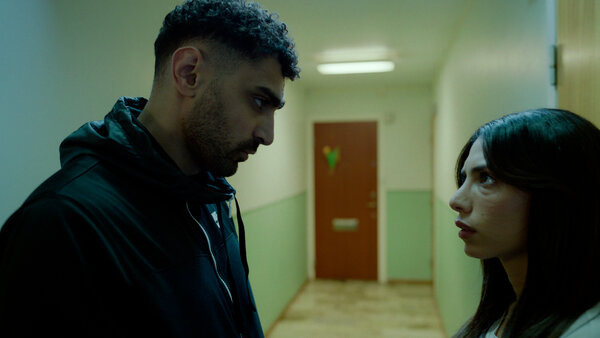 Like many others in the largely immigrant housing projects where she lives, Leya has limited options. She decides that her only choice is to borrow the money from her drug-dealing brother-in-law (Dada Fungula Bozela), which ends up compromising her future when he makes himself a partner in her firm.

“When it comes to entrepreneurship you have to have capital before even starting a business,” Ahmad said in a recent video chat. “The character I play is the daughter of immigrant parents, so it’s not like there’s any old money she can use.”

Ahmad, 30, is a rising star of Swedish films and of TV series like “The Rain” and “Quicksand,” both on Netflix. One of the distinctions of “Snabba Cash,” she noted, is the diversity of its cast, which is rare for a Swedish show.

“I started my acting career when I was 15, and it took me 15 years to be in this type of cast,” she said. “I was just very inspired because usually I’m alone — I’m the only person of color in the room.”

Ahmad’s Kurdish parents immigrated to Sweden in the 1980s, when that era’s progressive government opened the country’s doors to a stream of non-Nordic asylum seekers. Ahmad was born and raised in the Stockholm suburb Akalla, where immigrants make up most of the population. Her father, who is still alive, was a classically trained actor. But in Sweden, he worked as a school janitor.

Many of Ahmad’s fellow cast members in “Snabba Cash” are first-time actors who also have immigrant backgrounds — a reflection of Sweden’s demographic changes in recent decades. A surge in the 2010s brought in hundreds of thousands of new asylum seekers, many of whom were fleeing the Syrian Civil War. (Syrians today make up the largest nonnative ethnic group in Sweden.) By 2016, about one in six Swedish residents were immigrants.

Those changes, along with an influx of illegal weapons and a rise in gang-related assaults and shootings, prompted a swell of anti-immigrant political rhetoric, along with a clampdown on new asylum seekers. Viewed in this light, Ahmad’s leading role as a savvy businesswoman who knows how to game a dysfunctional system is mold-breaking. That her colleagues with immigrant backgrounds were cast mostly as gun-toting drug dealers, however, could, on the surface, raise questions.

Soderlund, who has worked in Swedish TV for over 15 years creating socially aware series like “The Fat and the Angry” (2014), based on a true story about scams and high-level corruption, envisaged “Snabba Cash” as in some ways a direct response to the anti-immigrant rhetoric.

“Our series is a story about class, not ethnicity,” he wrote in a follow-up email. “And in Sweden today, people of the lower class usually are people of color. Sweden is a very racist country, systemically, and it’s extremely hard to make it if you’re not a white Swede.”

“Someone said that a society gets the criminals it deserves,” he added. “And I think that’s true to some extent.”

Lapidus, 46, was a criminal defense lawyer when he wrote the Stockholm Noir Trilogy of novels, of which “Snabba Cash” was the first. The cultural fabric of those novels, he noted, had been left far behind in the Netflix series, which he executive produced. (He also co-wrote Episode 4). In the original stories, set near the turn of the millennium, the characters quote lines from the movie “Wall Street” and refer to a BMW 530i as a “cocaine sledge.” The nature of crime in Stockholm is also portrayed very differently.

“When I wrote the first novel, I remember clearly being very careful not to have too many firearms in it because they were very unusual in Sweden at that time,” Lapidus said in a video chat. “Now, 15 years later, organized crime has become more brutal and more violent.”

In the Netflix series, rival gang members rarely go out in daylight without bulletproof vests. Soderlund, who said he had met his “fair share of criminals” while researching the show, said that this was quite true-to-life.

“The first ‘Snabba Cash’ films portrayed gangsters from the Balkans who are trained to shoot,” he said. “The problem now is the kids shooting today are spraying their bullets all over the place.”

Although the success of Soderlund’s new iteration is undetermined, Swedish and international audiences have certainly demonstrated a taste for “Snabba” screen adaptations.

The first film, directed by Daniel Espinosa, dethroned “Avatar” at the Swedish box office when it was released there in 2010. Two years later, it was released in the United States as “Easy Money,” as presented by Martin Scorsese. All three films starred the Swedish-American actor Joel Kinnaman as J.W., a breakout role that helped to land him meaty parts in popular U.S. series like “The Killing” and “House of Cards.”

“Snabba Cash” gained currency in other ways, too. Lapidus, who stopped working as a lawyer four years ago to write full-time, claims full credit for coining “snabba cash” as a phrase.

“It didn’t exist before the first novel came out in 2006,” Lapidus said. He found out it had become a thing in Sweden about eight years ago, he added, when he was working on a gang warfare trial.

“The police had very extensive wiretapping, and you could hear when all the gangsters were talking to each other how they were referring to the term ‘snabba cash’ over and over again,” he said. “It was like how the American mafia used to be influenced by ‘The Godfather’ movies. They were saying things like, ‘Now, we create ‘Snabba Cash’ for real.’”

Ahmad, who said she was a big fan of the movies, is also a writer, though her perspective is very different. Her first novel, “One Day I Will Build a Castle of Money,” was published in Sweden in 2017. (An English version is not yet available.) In the video chat, she talked about writing it entirely on her cellphone at age 22. Largely autobiographical, it describes a life of contrasts, which takes her protagonist from the benches of Akalla to studying at the Stockholm Academy of Dramatic Arts, just as Ahmad did.

The very first scene in “Snabba Cash” is the one that Ahmad thinks best encapsulates Leya’s struggle — and to a certain extent her own.

“She tries to get into her office but her pass card doesn’t work,” she said. “She can’t do it normally, so she has to hustle her way in. For me it’s a very symbolic scene.”