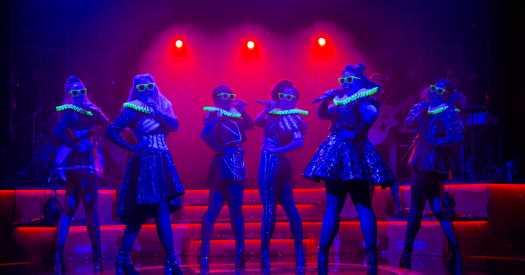 LONDON — At 3:15 p.m. on Saturday, a line of theater fans stretched outside the Lyric in London's West End, all desperate to see the return of “Six,” the hit musical about Henry VIII’s wives.

The show was scheduled to start 45 minutes later, when it would become the first musical to be staged in the West End since theaters were shuttered in March because of the coronavirus pandemic.

But some in line were anxious that the curtain might not rise.

“All day, I’ve been, like, ‘Something bad’s going to happen,’” said Beth Donovan, 20. She worried that authorities might stop the performance at the last minute, she said, or — worse — that someone in the cast might have caught the virus.

She wasn’t the only one concerned. “On the way here, we said we wouldn’t believe it was happening until we were actually in our seats and the music was on,” said Lauren Bullen, 37, who was with her daughter Holly, 8.

Concerns like these might seem over the top, but “Six” has had a worse year than arguably any other theater production in Britain, highlighting just how hard it has been to put on a show during the pandemic. 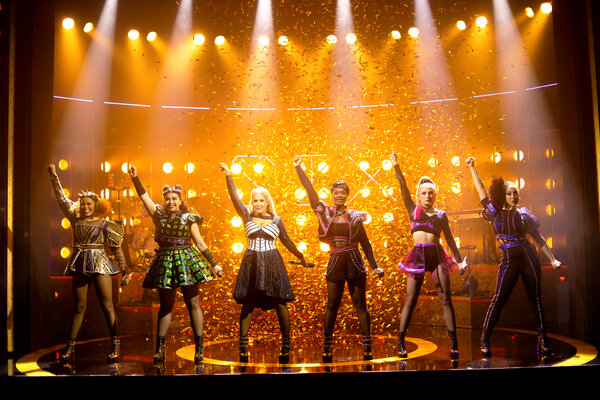 Written in 2017 by Toby Marlow and Lucy Moss, two college students, “Six” reimagines the wives of Henry VIII competing in a song contest for the title of the king’s most unfortunate wife. (The two who were beheaded have an advantage.)

Its catchy songs, funny dialogue and message of female empowerment have won it a legion of fans worldwide, known as the “Queendom,” who dress up as its characters and spread its music across social media.

Before the pandemic, there was a production of “Six” in London’s West End, and touring versions in Britain, Australia and on several cruise ships. A Broadway show was in previews too, with productions in Chicago and the Philippines in the works.

But then, in March, as coronavirus cases rose sharply in New York, the show’s Broadway opening night was canceled, just hours before curtain.

“I was in a taxi, about to get my hair done, and it came on the radio that Broadway was closing,” said Moss, 26. An usher at a preview performance had tested positive for the virus, and Broadway was gripped by uncertainty. “It was just good the decision was taken out of our hands,” she said.

Days later, the British productions of “Six” were also shuttered when England went into lockdown. The cruise ship and Australia shows had already been called off.

In June, Broadway announced it would remain shut for the rest of the year, stopping any immediate plans for a “Six” reopening in New York. But in England, the government allowed theatrical performances to restart, though only if they were held outdoors, with everyone — onstage and off — keeping a distance of about six feet from each other.

“Six” soon announced it would tour a concert version of the show at 12 drive-in venues around England, making it the first West End musical to make a comeback — albeit mostly in locations many miles from London.

“Six” was at an advantage over other shows because of its small scale, said Kenny Wax, one of its producers: It only has six cast members plus a four-person band. The characters hardly ever touch, so the choreography didn’t need many changes, even with distancing.

“If it was a great love story like ‘Carousel’, with a lot of singing into each other’s faces, we’d be in trouble,” Wax added.

The company resumed rehearsing on Zoom, even as glitches on the video platform caused headaches. And then, just days before in-person rehearsals were to begin, the concert promoter providing the drive-in venues pulled the plug. There had been a coronavirus spike in Liverpool, one of the cities on the tour, and the threat of lockdowns was looming.

A few months later, with socially distanced indoor shows allowed again, despite rising coronavirus numbers, the “Six” team decided optimistically to try again. This time, it announced a West End return for November, as well as a run in Manchester, England.

The team prepared for yet another comeback, and on Oct. 31 the casts met in London, with rehearsals set to begin the next morning.

But that night, disaster struck again. Prime Minister Boris Johnson went on television and announced a full national lockdown for England: All theater shows were banned until early December, at least.

The casts had no option but to go home, cross their fingers, and hope this lockdown was a short one.

One recent Thursday, the Manchester and West End casts finally returned to rehearsal, taking over a whole building of studios in south London. The show’s producers had decided to take a risk that the lockdown would end on Dec. 2, and hoped the shows could start a few days later.

Downstairs, members of the London cast stretched to warm up for the day.

“It just feels great to be in the room,” said Moss, the co-creator. “As soon as we get rehearsing, it’s like the pandemic never happened,” she added.

A few minutes later, the cast members put on their sparkling, studded boots to rehearse a number called “Get Down.” (“You said that I tricked ya, ‘cause I didn’t look like my profile picture,” goes one line.) They ran through the movements again and again — head flicks, arm snaps — fine tuning the steps, while Carrie-Anne Ingrouille, the show’s choreographer, encouraged them throughout.

“You clearly weren’t watching at the end,” Bowman replied, and the rest of the cast laughed.

The rehearsal continued in high spirits until Sunita Hinduja, the company’s manager, in charge of medical matters, came into the studio to interrupt.

The prime minister had been expected to announce an end to England’s lockdown that morning, but also reintroduce a tiered system of restrictions that would mean performances were allowed in some cities, but not others.

There was good news for the London cast, she said: “We’re going to be able to do it.”

Some of the performers clapped, and one even whooped. But the celebrations only lasted a few seconds before coming to an abrupt halt. Everyone seem to know bad news was just around the corner.

The Manchester shows were still on pause until Dec. 17, at the earliest, Hinduja said, so its cast, busy upstairs, wouldn’t get to go onstage as expected.

“Give them a lot of love today,” Hinduja said. “Just no touching.”

Nine days later, on Dec. 5, the Lyric theater in London was full — or as full as a theater can be in the age of social distancing. An audience of just under 500 people, from middle-aged couples to groups of young women, took their spaced-out seats for the first performance of “Six” in almost nine months.

The auditorium, though half empty, was full of noise. When an announcement came on asking the audience to keep their masks on throughout, the “Queendom” fans — many of them wearing homemade face coverings featuring “Six” in sparkly letters — cheered loudly from the balconies.

Some of the audience cheers turned into screams: It was more like the opening of a pop concert than a musical.

The show hardly seemed altered by the pandemic. Three of the band members wore masks (studded to match their costumes), but the cast, who had all been tested for the virus, wove in and out of each other, and touched sometimes in the dance routines. There was no hand sanitizer in sight.

The show ended in a medley number, the crowd on its feet, clapping to the beat as gold streamers rained down on the cast. One of the queens — Courtney Bowman, who had been playing Anne Boleyn — rushed to the back of the stage, grabbed her phone and shot an enthusiastic clip for Instagram.

Holly Bullen, the eight-year-old fan, looked overjoyed as she got up to leave. She had been “a bit teary” for much of it, she said, overcome with excitement. “I’m seeing it again tomorrow!” she added.

Moss said afterward that she was relieved that the show was finally back onstage. “I was doing all the nightmare scenarios in my head,” she said. It might still get closed again soon, she warned — many in Britain were expecting another lockdown after Christmas.

But she’d deal with that when it happened.