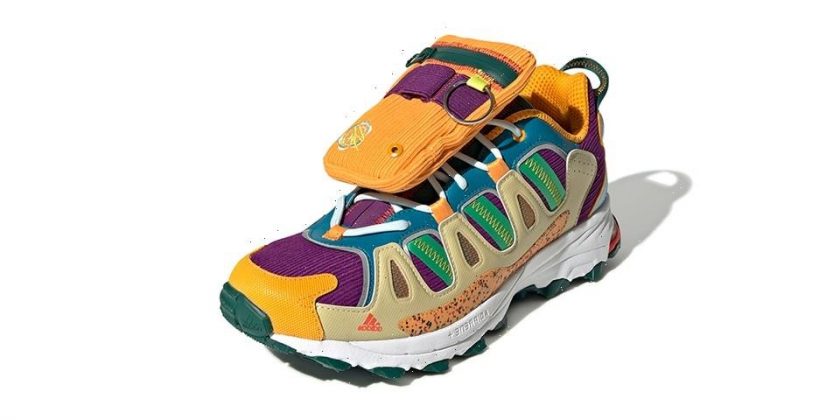 After letting the mythical “S” creature roam the streets of L.A., New York, Berlin, and London to grant lucky spotters with early access to his upcoming sneakers, Sean Wotherspoon, Disney, and adidas Originals‘ Superturf Adventure SW is now officially dropping for the masses.

Previously previewed in July, the Superturf Adventure SW is Wortherspoon’s first original in-collaboration design as previous partnerships have only reworked existing pairs from the Three Stripes catalog. Following in the footsteps of the Round Two owner’s ethos, the sneaker is fully sustainable and vegan, made using recycled materials and vegan alternatives to animal-derived ingredients or materials.

Served up in a palette of “Mesa,” “Halo Amber,” and “Glory Purple,” the Superturf Adventure SW features an upper base made from purple corduroy that’s overlayed with a vegan material panel that interlocks with green webbing Three Stripes, subsequently locking into the blue eyestay placket. A speckled orange panel hits the lower section of the mid-panel, while blue vegan leather has been used for the heel clip.

Notably, a corduroy bag in orange with purple webbing straps, a green zipper, and Wotherspoon’s signature branding graces the tongue, and upon removal reveals a zipper-equipped tongue. Undoing this a blue corduroy underlay that’s embroidered with Jiminy Cricket from the 1940 motion picture, The Adventures of Pinocchio.