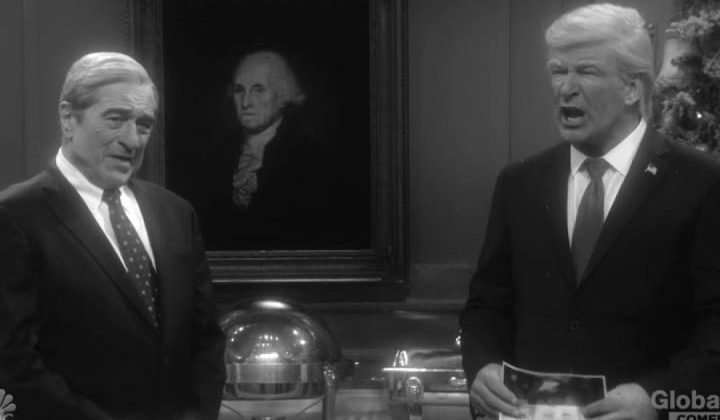 “Saturday Night Live” returned Saturday night with a cold open that was a Trump-spin on “A Christmas Carol.”

The scene begins with U.S. President Donald Trump, played by Alec Baldwin, standing on his balcony in disarray, saying that he can’t handle being president anymore.

Suddenly an angel named Clarence appears, and takes Trump on a dream-like journey through what things would be like if he actually never became president.

“Everybody looks so different, what are those things on their faces,” Trump says while looking around the dream world.

“Those are called smiles,” Clarence says.

Suddenly Press Secretary Sarah Sanders appears in a chipper mood than usual. She tells Trump that she is now working in PR at Facebook making more money than at the White House, and is happy for it.

In this world Trump didn’t win the presidency, Hillary Clinton did just by visiting Wisconsin once, Clarence explains.

“What about the emails?” Trump asks.

“They were all Bed, Bath & Beyond coupons,” Clarence explains.

All the characters from Trump’s world come up to greet him, from Eric Trump, who is now smart because he had more time to attend adult education since he didn’t have to run the Trump Organization, to Melania, who has no accent, since being around Trump hurt her language skills.

U.S. Vice President Mike Pence is DJing the little shindig, as that is what he always had wanted to do, rather than sit in meeting staring into space…

Even Brett Kavanaugh was there, played by Matt Damon, and says he couldn’t even imagine being on the Supreme Court.

“With my temperament, are you insane?” Kavanaugh laughs.

He gives Trump a calendar, where everyday is a different beer.

Finally, Robert Mueller, played by Robert De Niro, shows up, and hands Trump a picture of his grandson, who he is able to spend more time with now that he isn’t investigating Trump all the time.

All of this proves too much for Trump to handle, and he wishes he actually were president, as the dream dissolves and reality returns.