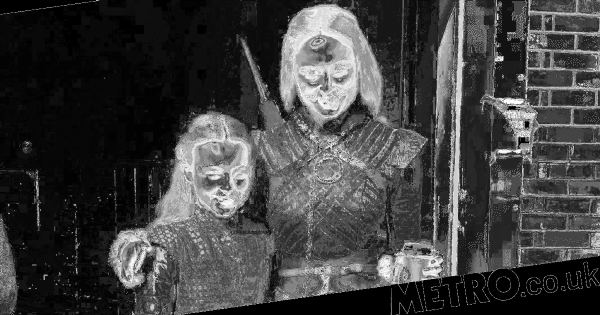 Both girls are decked out in their character’s usual getup and posing with her arm around Bella, Sophie is holding onto a coffee cup that suspiciously looks like the one that popped up onscreen.

Sharing the snap on Twitter, fans started speculating with their incriminating theories.

One said: ‘Clearly, it was Sansa who set up Dany. Refer to exhibit A: coffee cup in hand for proof.’

Another wrote: ‘Obviously Sansa left this coffee cup in front of Dany knowing she’d take the blame for it. All part of Sansa’s plan to turn Jon Snow against his queen / girlfriend / aunt.’

HBO didn’t seem too fazed by the faux pas, though, and took it in their stride as they posted a pretty funny tweet in reference to the infamous cup that wasn’t actually from Starbucks, like everyone assumed.

It read: ‘News from Winterfell. The latte that appeared in the episode was a mistake. #Daenerys had ordered an herbal tea.’

Showrunners on the series later claimed that the whole thing had been ‘blown out of proportion’ and actually, it’s easier than you think for things to be forgotten about on set.

They told Variety: ‘[The coffee cup error has been] so blown out of proportion [because] it has not happened with Thrones so far.’

Game of Thrones season 8 continues on Sunday and Monday on Sky Atlantic and NOW TV.

MORE: Ed Sheeran beats Adele in new Rich List as he doubles his wealth to total £160million in just a year