The show kicked off its 48th year with a cold open that was also a commentary on the expectations it faces after big cast changes. 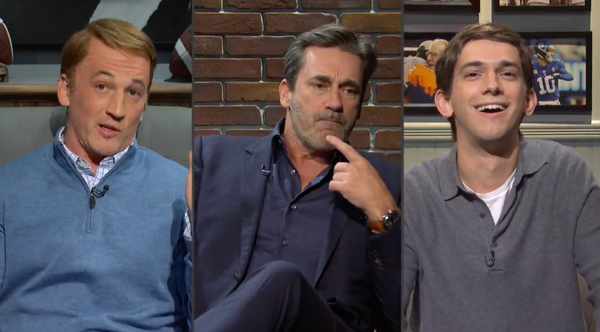 In the first episode of its 48th season, “S.N.L.” went meta in the opening sketch, recruiting the host, Miles Teller, and cast member Andrew Dismukes to play the sibling sports commentators Peyton and Eli Manning as they offered their running criticism on a seemingly standard satire of former President Donald J. Trump.

For the sketch-within-a-sketch, James Austin Johnson reprised his recurring role as Trump and Chloe Fineman played an adviser encouraging him not to stay at Mar-a-Lago during Hurricane Ian. “Actually it’s the safest place I’ve been in two years,” Johnson told her. “There’s no lawyers, no F.B.I. I’m in my happy place.”

“A political impression that no one asked for,” Teller said. “What about a fun impression, like Anthony Fauci or Lindsey Graham or Rudy Giuliani?”

Dismukes replied, “Those were all Kate McKinnon.”

The absence of several familiar faces was noticeable in this episode, which also featured the musical guest Kendrick Lamar. Eight veteran cast members left “S.N.L.” ahead of this weekend’s broadcast, starting with McKinnon, Aidy Bryant, Pete Davidson and Kyle Mooney, who all made their exit plans known before last May’s season finale. The departures of Melissa Villaseñor, Alex Moffat and Aristotle Athari were announced at the start of September, and Chris Redd left later that month.