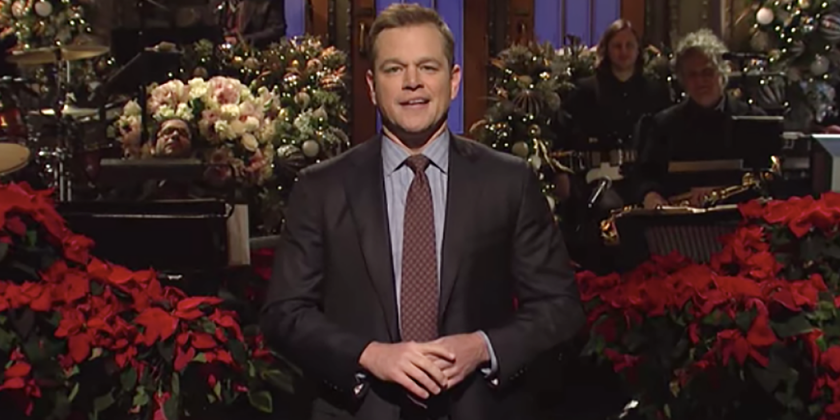 Several celebrity guests turned out for the final new “Saturday Night Live” broadcast of 2018, including Alec Baldwin, Ben Stiller, Matt Damon and Robert De Niro. But the show featured only the briefest of appearances from the cast member Pete Davidson, who on Saturday afternoon published an Instagram post that elicited widespread concern about his safety and well-being.

The post from Davidson said: “I don’t really want to be on this earth anymore. I’m doing my best to stay here for you but I actually don’t know how much longer I can last. All I’ve ever tried to do was help people. Just remember I told you so [heart emoji].” His Instagram account was deactivated shortly after it was published.

The New York Police Department said on Saturday afternoon that it had sent an officer to NBC’s Manhattan headquarters to check on Davidson, 25, who has spoken publicly, on “S.N.L.” and elsewhere, about being given a diagnosis of borderline personality disorder and his efforts to improve his mental health.

Davidson did not participate in any of the live comedy sketches on this weekend’s episode, which was hosted by Damon. But Davidson did appear around 12:50 a.m. to introduce a musical performance by Miley Cyrus, Mark Ronson and Sean Ono Lennon. Davidson was also shown in a pretaped segment satirizing the efforts to find a host for the Academy Awards.

In the show’s opening sketch, Baldwin returned to play President Trump in a sendup of the film “It’s a Wonderful Life.”

After lamenting that his presidency is falling apart, Baldwin was visited by an angel named Clarence (Kenan Thompson), who took him to an alternate reality where he lost the 2016 election.

Baldwin observed, “Everyone looks so different. What are those things on their faces?”

Thompson replied, “Those are called smiles.”

At a party, Baldwin met several familiar members of his would-be administration, including Sarah Huckabee Sanders (Aidy Bryant), now working in public relations for companies like Facebook, Ashley Madison and the Romaine Lettuce Association; and Kellyanne Conway (Kate McKinnon), who he said looked healthy and vibrant.

McKinnon answered, “Actually, that’s because I’m no longer eaten from within by lies. And after we lost the campaign the devil did give me my soul back.”

Baldwin encountered Melania Trump (Cecily Strong), now his ex-wife and speaking English without an accent. Strong explained, “I lost it after we got divorced. They said being around you all the time was hurting my language skills.”

He ran into a grateful Michael Cohen (Stiller), who hailed him as his best friend. “I just want to say that you taught me everything I know,” said Stiller. “Everything single thing I’ve done is because you’ve directed me to do it. And I hope everyone knows it.”

Damon, as Brett Kavanaugh, expressed surprise that he’d ever be considered for the Supreme Court. “With my temperament?” said Damon “Are you insane? Nah, nah, they went with that nerd Merrick Garland. But on the plus side, when I tell people I like beer, they find it charming and not like I’m threatening violence.”

And De Niro, playing Robert Mueller, informed Baldwin he has something he’s been waiting to give him for a long time — not a subpoena or a final report, but a picture of his grandson. “I’ve been spending so much more time with him since I don’t have to investigate some idiot for treason,” De Niro said.

In other memorable moments from the show:

Oscars Auditions of the Week

In a filmed segment, “S.N.L.” contemplated the challenge facing the Academy Awards as it seeks a new host for the show. As a voice-over put it, “Who will risk everything for the chance to gain nothing?”

The sketch was mostly an opportunity for the “S.N.L.” cast members to impersonate other comedians and actors, including Tiffany Haddish (Ego Nwodim), Michelle Wolf (McKinnon), Sarah Silverman (Melissa Villaseñor) and Rachel Brosnahan (Cecily Strong). Bryant appeared three times, as the TV producer Amy Sherman-Palladino; as Roseanne Barr; and as the Australian comedian Hannah Gadsby (“Oscars host? Who’s it going to be? Lots of tension. Who’s going to break the tension? I will host, but in the middle of it, I quit hosting. Too much tension.”)

Davidson also appeared in the sketch as the “Bohemian Rhapsody” star Rami Malek, as he stared eerily into the camera and deadpanned, “Maybe something fun and super high energy. Does that work?”

Weekend Update Jokes of the Week

At the “Weekend Update” desk, the anchors Colin Jost and Michael Che continued to riff on a calamitous week for the Trump administration.

This last week was a pretty bad year for Donald Trump. Think about what’s currently under investigation for him: Trump’s campaign, his transition, his inauguration, his business and his presidency. So everyone check your cards because you might have impeachment bingo. In fact, Trump has reportedly told people close to him that he’s worried he will get impeached. And by people close t him, I of course mean Sean Hannity and Colonel Sanders. This is a lot of legal trouble for any president. I mean, I’m no lawyer but neither is Trump’s lawyer. This week, Michael Cohen was sentenced to three years in prison and he claimed he only committed his crimes out of a blind loyalty to Trump. But Cohen was clearly a crook before he met Donald Trump. You know how I know? He was hired by Donald Trump. The only questions on a trump job application are, “Do you do crimes?” And “Wanna do more?”

Reason to Stay Up Until 1 A.M. of the Week

While it’s rare to see “Saturday Night Live” offer up topical comedy in the waning moments of an episode, the show did just that in a sketch that imagined Theresa May (McKinnon), Britain’s prime minister, struggling to host a Christmas-themed talk show after having survived a party confidence vote.

As McKinnon opened the show, she said, “What a dreadful week it’s been. My Brexit deal is falling apart. I almost got voted out and no one in the world likes me at all. But it’s still Christmas so let’s try to have some cheer tonight, shall we?”

She went on to introduce guests including her predecessor, David Cameron (Damon); Elton John (Bryant); and the Harry Potter villain Lord Voldemort (Mikey Day), whom she introduced as “the one person in Britain more reviled than me.” Day apologetically resisted McKinnon’s attempts to compare her to him: “If you could maybe not lump us together, I just can’t have that be the pull-quote from this interview,” he said.