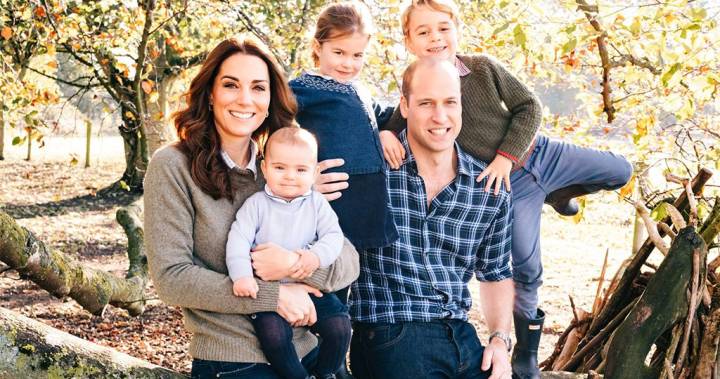 The British Royal Family is ready for the holidays, and they’ve released new photos to prove it.

In the family photo, the Duke and Duchess of Cambridge are sitting outdoors in jeans with their kids playfully posed around them.

Middleton, 36, is holding Louis, who is dressed in a sweater and navy blue shorts and tights. Prince William, 36, has his arm around three-year-old Charlotte as George, 5, leans on his shoulders.

“The Duke and Duchess of Cambridge are pleased to share a new photograph of their family,” the palace tweeted.

“The photograph, taken by Matt Porteous, shows The Duke and Duchess with their three children at Anmer Hall, and features on Their Royal Highnesses’ Christmas card this year.”

The palace also released a Christmas card photo of Prince Harry, 34, and Meghan Markle, 37, taken at their wedding reception in May.

The photo is a black and white shot of the Duke and Duchess of Sussex embracing while watching fireworks.

“The photograph, which features on Their Royal Highnesses’ Christmas card, was taken by photographer Chris Allerton,” the palace tweeted.

Markle and Prince Harry are expecting their first child together, due spring 2019.

The Prince of Wales and Duchess of Cornwall are seated on a bench in the grounds of Clarence House, looking affectionately at one another. The photo was taken by Hugo Burnand.

The Duke and Duchess of Cambridge’s 2018 Christmas card is a change from last year’s, as the 2017 card showed them with George and Charlotte dressed in formal wear.

The 2017 photo was taken by royal photographer Chris Jackson at Kensington Palace.