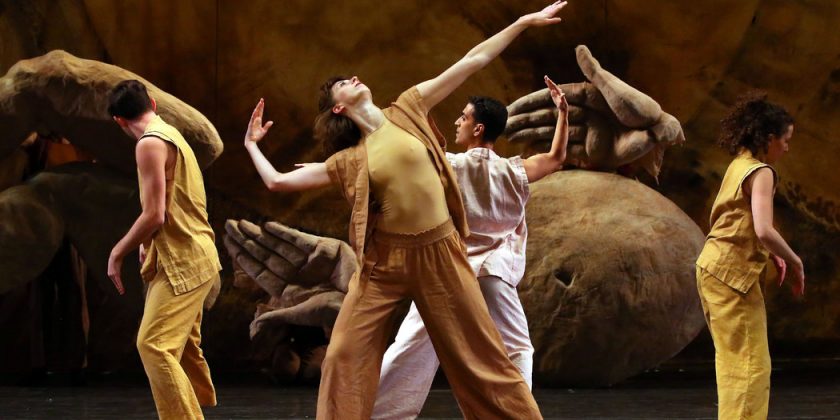 The word “fantasque,” originally French, is both noun (meaning fancy, fantasy) and adjective (meaning fanciful, fantastic). For many dance-goers, it immediately conjures the titles of two ballets: the 1919 surreal comedy “La Boutique Fantasque” and the 1949 (also comic) pure-dance creation “Bourrée Fantasque,” each of which employs irresistible 19th-century music.

Now “Fantasque” has become the title of a new work by the choreographer John Heginbotham at N.Y.U. Skirball; it’s linked to the first of those earlier ballets. It features multiple items from the enchantingly inventive, ebullient, whimsical and sometimes poignant “Sins of Old Age”” (“Péchés de Vieillesse”), composed by Rossini, with some Rossini-pastiche additions by Ottorino Respighi, all played here by the pianist George Shevtsov. Respighi arranged his Rossini compilation for “La Boutique Fantasque,” which Leonide Massine choreographed for Diaghilev’s Ballets Russes, with designs by André Derain. 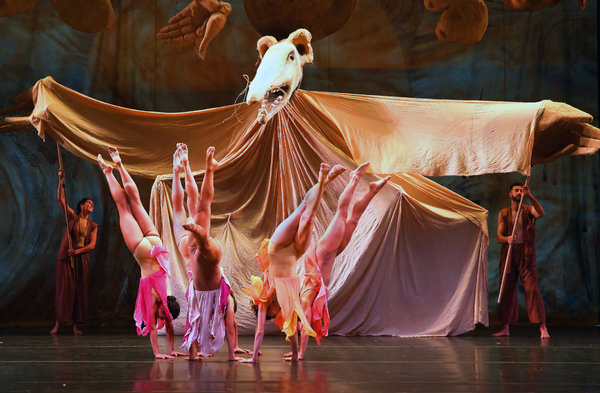 Mr. Heginbotham, who danced for several years in the Mark Morris Dance Group, has been a choreographer of note for several years now. His company, Dance Heginbotham, began life in 2011; he also made the dream ballet in Daniel Fish’s much-discussed revisionist production of “Oklahoma!,” seen this autumn at St Ann’s Warehouse, Brooklyn.

He doesn’t use anything like Massine’s story (in which dancing dolls take over their toyshop and throw out the tourists who bought them), but he gives his own work something of the same subversive craziness. (His story has the sun, the moon, the devil, people in love and a baby.) He also packs it with a comparable selection of winning ingredients: notably, outsize puppets and designs by Amy Trompetter, six excellent dancers, and five charming puppeteers.

Lighting designed by Nicole Pearce has the marvelous effect of transforming the geometrically patterned backdrop from sunny yellow to nocturnal blue, and back again. Maile Okamura dresses the dancers in attractively silky loose pajamas. The spirit onstage is always free, eccentric, uninhibited. Parts of the audience respond exultantly.

As far as Ms Trompetter’s designs — very “fantasque” — go, I respond the same way. I don’t understand them, but she makes me enjoy their mystery. Apart from the sun, moon, devil, and baby, there are the isolated parts of a human body — feet, legs, belly, breasts, head — which get variously arranged, often suspended horizontally across the back of the stage. Then there are sunflowers and a giant rat — no, I don’t understand any of this, but I rejoice to be in their brightly imaginative company.

Yet they don’t prove enough to make a stage world sufficiently strong to hold me throughout this piece. Principally, “Fantasque” suffers from Mr. Heginbotham’s lack of rhythmic structure. It also fails to tells its sun-moon-devil-baby story even remotely well, but to me that’s secondary: I’ve watched many dances that didn’t make their full narratives clear but which nonetheless pulled me into their mysteries. (I didn’t understand half of what the dream ballet in the Fish-Heginbotham “Oklahoma!” was about, but, even when most baffled or irked, I was riveted.)

Here the start is happy: dancers introducing themselves with footwork and brio. But are they telling a story or merely parading it? Before it’s halfway through, “Fantasque” loses course when Mr. Shevtsov leaves his piano to dance flamenco with the baby. (Don’t ask.)

I don’t mind that “Fantasque” only gets crazier from then on. It seems to want to pursue large poetic ideas. As you watch, however, it grows less dancy and less organic; its efforts to open up the story in various directions feel unrelated to one another. Mallarmé observed that poetry is written not with ideas but with words; and the same is true with dance: it’s made in not with ideas but with movement. Damnation, love, redemption, joy: Dance can express aspects of these, but here seems peripheral, a footnote. “Fantasque” looks less than half-baked. Despite the charm of the performers, the movement seems to unravel before your eyes.