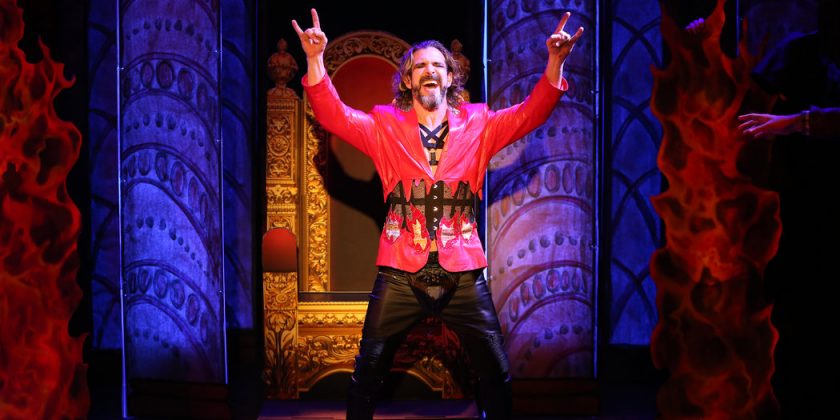 In the lobby of the York Theater, where Gary Apple’s musical “Christmas in Hell” is playing, there is a white board where people can contribute their bad holiday experiences. It will be interesting to see if anybody writes down “the last two hours” on their way out.

Singing cats, singing founding fathers, singing teapots: Musical-theater audiences will go along with pretty much anything, so the story of a child who becomes possessed after eating the fruitcake from hell — a literal description — is not particularly far-fetched.

A show, however, must have a minimum of internal logic and some good tunes. “Christmas in Hell,” directed by Bill Castellino (“Desperate Measures”), comes up short on both counts.

When Richard (Scott Ahearn) is told that his 8-year-old son has been misbehaving at school, he seems surprised. “There must be some mistake,” he says upon hearing that Davin (Elijah Rayman) is “off the map” — one of the few printable quotes, as cursing passes for humor here.

A detective (Dathan B. Williams) is on the case and brings up satanic organizations. Does he have insights that Richard lacks? As it turns out, our hapless single dad might have feigned ignorance because he has already been to hell and back, an experience he recounts in a convoluted flashback involving Charles Manson and Lucifer. (Inexplicably, the cop looks baffled by what he hears, as if he wasn’t the one who had brought up the subject in the first place.)

So, the lord of darkness.

Lucifer appears only in the second act, which is regrettable because Brandon Williams plays him pretty much the same way he played a cocksure rocker in “Gettin’ the Band Back Together.” This is a sound decision: Mr. Williams excels at portraying overconfident egomaniacs, and you could argue that Lucifer is the original troubled charismatic frontman. The costume designer Tyler M. Holland seems to agree, dressing him in pleather and fetish accessories straight out of a hair-metal video.

A lot happens, none of it memorable except perhaps to dedicated fans of inept musicals. The score by Mr. Apple, who also wrote the book, is so unchallenging that almost all the actors take it upon themselves to embellish it with gratuitous vocal stylings. As the mysterious Galiana, for instance, Lori Hammel works overtime to liven up “There Is Nothing More That I Can Say,” a song that takes forever to, as its title indicates, say nothing.

And so the show goes, stumbling from one scene to the next with no evidence of coherence, shoehorning songs that advance neither plot nor characterization. We meet, for instance, a hellish boogeyman named Carl (Zak Risinger), who complains that his hands are too big in a song titled “When Your Hands Are Too Big.”

By the time Richard explains to the devil that “you have to love your child more than cheese” (“More than Jarlsberg, mascarpone/More than Camembert or even provolone”), you may find yourself wondering where to sign up for Lucifer’s team.