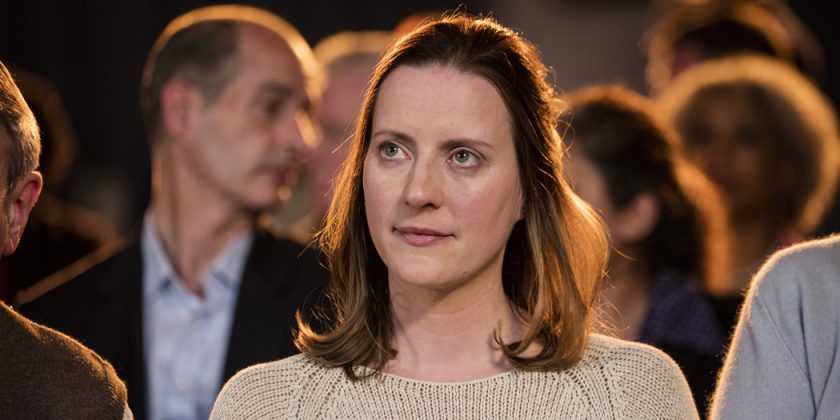 The British actress creates and stars in series in which people are either predator or prey. Her shows are essentially social-comedy horror stories, and Davis likes to play the monsters: emotional parasites who worm into other people’s lives and devour them from the inside out.

In the laceratingly funny “Nighty Night,” she played a beautician seeking a replacement for her cancer-stricken husband while he was still alive. In “Hunderby,” a Gothic melodrama parody, she was a housekeeper out to undermine the marriage of the minister she worked for. In “Camping” — whose American adaptation is now on HBO — she was the libidinous outsider who upended an outdoorsy group vacation.

It’s not pretty, but in Davisworld, that’s life. It’s awful, in the best way.

In “Sally4Ever,” a British coproduction beginning Sunday on HBO (and paired with “Camping”), Davis does not have the title role. That unfortunate is Sally (Catherine Shepherd) a marketing executive living a life of quiet dissatisfaction with David (Alex Macqueen), her boyfriend of 10 years and a simpering milquetoast, heavy on the milque.

Sally’s life is like a picture-dictionary definition of “settling.” She sleepwalks through her days at her stultifying office, busy with a campaign to “put the sexy back in eggs.” She has dull meals and boring sex with David. She seems quietly horrified by her life, as if she’s just resigned herself to get from here to the grave with a minimum of fuss.

Yet she agrees to marry David, whom she’s put off for years, after a wretched proposal in which he breaks down in tears. “I’m so ill, please!” he wails. “You’re not getting any younger! You’re not going to meet anyone else!”

There he’s wrong. She meets and falls madly — well, in lust, at least — with Emma (Davis), a magnetic singer and would-be actress. Sally has the best sex of her life (possibly the only good sex of her life) in a scene, directed by Davis, that intercuts their anatomically thorough lovemaking with images of David vigorously flossing his teeth. (All of it is scored, perfectly, to the ’80s power ballad “China in Your Hand,” by T’Pau.)

“Sally4Ever” is not a comedy you’ll want to watch for a nuanced, empathetic drawing of its characters. Everyone around Sally is a grotesque: her co-workers, her parents and David, who’s less a person than a collection of warning signs. Emma quickly progresses from sexy and exciting to smothering, selfish and scheming — the sort of walking appetite that Davis has made an art form of portraying.

The exception is Sally, who’s as close to a rounded person as exists in Davis’s brand of comedy. In some ways, she’s a passive doormat, whom Emma is able to prod into asking David to sign over his house to them over an epically uncomfortable dinner. (“Just to ask you, really, if it’s O.K. we have it,” she finally blurts out.)

But she’s not stupid. It starts to dawn on her what bad news Emma is. (For instance, when Emma brazenly flirts with a married director, in front of Sally, to entice him to cast her in his next movie.) Bad news, however, is sometimes better than no news. Shepherd’s measured performance makes an absurd situation understandable; Emma is the hot stove that Sally needs to touch to remind herself that she’s alive.

The true stars here, though, are the failings of human nature. “Sally4Ever” is the kind of comedy so dark it pushes straight through bleakness to a morality-play clarity: It’s an unflattering, fluorescent light on the manifestations of human self-interest and weakness.

This works better than HBO’s translation of “Camping,” which nudges the story toward sympathy for the characters but stalls unsatisfyingly in between. It can be a lot to take, though, and even after three episodes (of seven altogether), the relentless cynicism can start to feel cruel, or at least repetitive.

But it’s impressive how committed Davis is to her character, powered by blinkered confidence and an utter lack of self-awareness. When Sally arrives for their first rendezvous, Emma says she knew that Sally would show up, declaring, with a worldly air, “I’ve just got a fifth sense for these things.”

What “Sally4Ever” has a sense for, instinctually, is the comedic power of human shamelessness. There’s no shame in that.