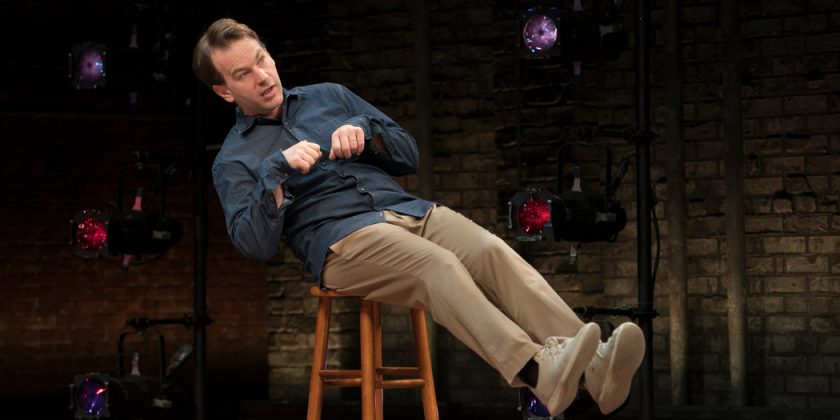 If Mike Birbiglia were a piece of furniture, he would surely be a well-worn, deeply stained, slightly squishy couch, much like the one he describes at the beginning of “The New One,” his winning Broadway debut at the Cort Theater. That may not sound like a flattering comparison.

But Mr. Birbiglia has great respect and affection for this kind of sofa, and so should you. As he explains in this one-man show, which opened on Sunday night under the seamless direction of Seth Barrish, a couch is “a deceptively simple piece of technology.”

It is, to be precise, “a bed that hugs you.” And in delivering that deceptively simple classification, Mr. Birbiglia’s voice becomes a low, wraparound, pleasure-drenched caress.

This somnolent sound makes you feel both relaxed and attentive, drowsy and giddy. And somehow an expensive night with a lone comedian starts to feel like a better bargain than bingeing and chilling at home.

In an age in which starry stand-up is instantly accessible to anyone with a Netflix subscription, dropping big bucks to see a low-key, self-effacing comedian in person might seem like a waste. Such an attitude doesn’t account, though, for the paradoxically lazy energy that Mr. Birbilgia emanates — a seductive force of physics that can be felt only partly when he’s onscreen.

Mr. Birbiglia — who came to national attention with the stage and film versions of “Sleepwalk With Me,” an autobiographical account of his dangerous nights with a sleep disorder — seems not only to occupy but also to absorb and transmute every inch of the Cort’s naked stage. (Appropriately, there’s more to Beowulf Boritt’s bare set than first meets the eye.) He achieves this partly by pacing, pacing as he talks, in ever-widening circles and diagonals and loop-de-loops.

As he does so, he kicks at and stumbles over invisible obstacles. Mr. Birbiglia is retracing the road map of his life, which has always been cluttered with his neuroses and physical ailments. In the months he describes in “The New One,” that life has become even more congested, almost to the point of paralysis.

That’s because of the before and after events surrounding the arrival of the play’s title character, a baby named Oona. Yes, she’s his child. Except she’s not quite. 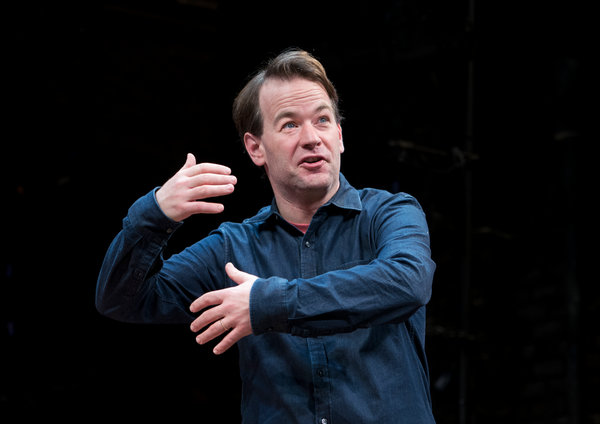 Mr. Birbiglia has the disadvantages — not shared by his beloved wife, the poet Jennifer Hope Stein — of being: a) a man, b) an itinerant comedian and c) a raging solipsist. Connecting with a needy creature who has disrupted the delicate balance of an anxious existence does not come easily to him.

Dad as the odd man out in baby-makes-three scenarios has long been a basis for domestic comedy. Reduced to synopses, much of the territory Mr. Birbiglia covers here sounds as wearily familiar as the “I Love Lucy” episodes that concerned the birth of Little Ricky.

This means (as my colleague Alexis Soloski pointed out when she reviewed this show Off Broadway) that Mr. Birbiglia is not a thoroughly modern dad, fully sharing the duties of parenthood. Mr. Birbiglia is quick to admit this dereliction and to praise his wife — and women in general — as belonging to a superior order of beings.

Men, he contends, are born jerks, a universal truth that he believes accounts for the state of the world today. (“The men we used to think were great were priests, politicians and gymnastic doctors. It hasn’t ended well for great.”) He supports this contention with humiliating stories of his own bad behavior, including a graphically detailed account of sex with a prostitute in Amsterdam.

His status as male is only one of the reasons he once thought that he and his wife shouldn’t have children. In the show’s opening section, he lists seven arguments against his becoming a father. They range from assorted physical ailments (an early experience of cancer, diabetes and his tendency to act out his dreams while asleep) to his suspicion that “consciousness is only a hallucination.”

The list in and of itself is not funny (although I did love the self-explanatory brevity of “No. 4: I have a cat”). The conversational detours the list inspires can be sublime. That caveat about consciousness and hallucinations? It somehow segues into a description of the role of Roman Catholicism in Mr. Birbiglia’s childhood as “this weird three-way with God” and his mom.

Unlikely similes and metaphors become a means of both addressing and (temporarily) defusing terrors and tensions. Presumably, verbal felicity is part of what brought Mr. Birbiglia and Ms. Stein together originally.

He quotes her poem about their daughter at eight months: “An infant reaches for something (I don’t know what), pushes it farther away and cries in frustration each time she reaches without realizing she is crawling for the first time. She is just like her father.”

That’s also a pretty good description of Mr. Birbiglia’s style as a performer here. As he restlessly circumambulates, verbally and physically, he’s always reaching for explanations that seem to explode on him. Yet, in the end, a symmetry emerges from the chaos he describes and embodies. Such is the gentle genius of one man’s comfortingly haphazard approach to comedy.

When you purchase a ticket for an independently reviewed play or musical through our site, we earn an affiliate commission.