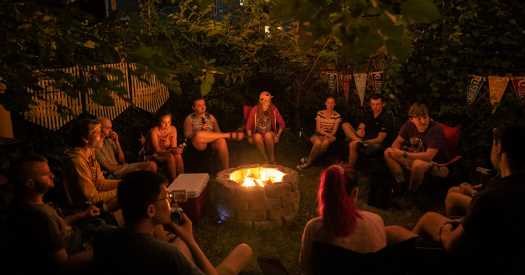 In the light of the campfire on a summer night, after the children have gone to bed, some of the grown-ups sit up and talk. Most of them have been coming here since they were small, and when they roast marshmallows for s’mores, the scent must take them right back — the charred-sugar sweetness that means, yep, someone’s marshmallow is suddenly aflame.

They’re so comforting, aren’t they, these seasonal rituals from childhood? In “The Grown-Ups,” an apocalyptic play by Skylar Fox and Simon Henriques staged for a handful of audience members around a real fire in the backyard of a house in Greenpoint, Brooklyn, the freshly minted adults are senior camp counselors at Indigo Woods, and they earnestly want to pass those traditions on.

Well, except the traditions that are racist, like the Indigenous name their extremely white camp had until this year, or otherwise exclusionary, structured to favor the boys or the older kids. Trouble is, there are a lot of those traditions.

“I guess it’s just a question of what you care about more,” says Cassie (Chloe Joy Ivanson), the self-possessed newcomer to this tight-knit group of counselors, and the only one who isn’t white. “Taking the best care of these kids that you can? Or doing things the way you’ve always done them.”

Directed by Fox for the experimental company Nightdrive, “The Grown-Ups” is part satire, part scary story. If it buckles under the weight of too many targets, that overstuffedness is very 2021: so many crises to frighten us, so much damage to fend off and fix, so much anxious-making news to navigate.

At night, when these 20-something counselors retrieve their phones from Aidan (Justin Phillips), the endearingly dutiful assistant camp director, they scroll for the latest developments in what sounds like a new American civil war — sparked, absurdly, by an image of a pineapple in which some people see the face of Dwayne Johnson, a.k.a. the Rock, and well-armed others furiously do not.

The counselors wonder whether to tell the children, and if so, what to say; then, as the danger moves closer, how to protect and prepare them, preferably without shattering their illusion of safety.

“The second we tell the kids,” Aidan says, “this isn’t camp anymore.”

Under a dusting of stars in Greenpoint the other night, the air smelled of earth and foliage and somehow of fresh water, too, as if Indigo Woods’s lake really were just out of sight. The firelight was soft, the physical space just right. It was quirkily charming that, as we filed through the house, whose location you learn only after you book a ticket, the other seven audience members and I had to pass through a bathroom to reach the yard.

Ivanson and Phillips managed nicely with performances very different in style. Yet I never did feel truly immersed in the play, or sense the bone-deep familiarity that the three veteran counselors — Becca (Emily E. Garrison), Lukas (Henriques) and Maeve (Abby Melick) — would have from their years of shared summertimes.

Doing theater this intimate, though, with actors and spectators in the same circle of chairs around a fire, is like doing close-up magic. It’s harder for the illusion to work, and relies on delicate calibration. It is also probably easier to pull off without a critic right in your face.

The Grown-Ups
Through Oct. 3 at a secret location in north Brooklyn; nightdrive.org/thegrownups. Running time: 1 hour 40 minutes.