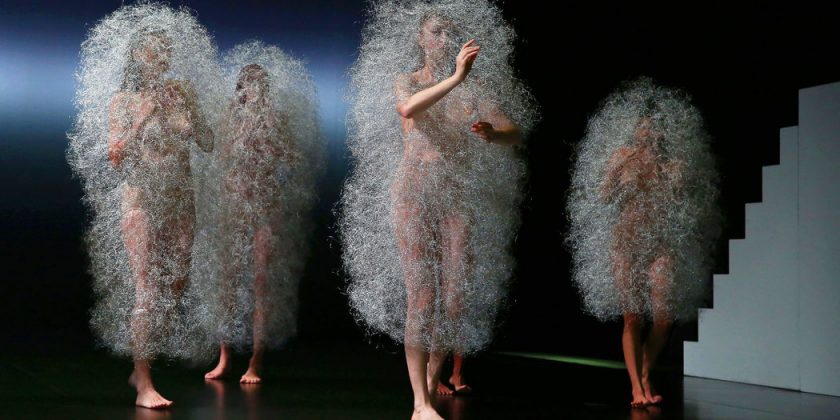 Bodies break. So can societies. Here’s one thing we can pretty much all agree on: The world is in a state of disruption, one that feels more extreme with each passing day. The German choreographer Sasha Waltz, in the United States premiere of her work “Kreatur,” reveals the unraveling of a society as its individuals perish in isolation and find their collective power as a group.

But first, the body needs protection. The most striking part of this production is not Ms. Waltz’s choreography, which has her dancers, time and again, torquing their spines in self-conscious agitation, or its electronic score, by the experimental music trio Soundwalk Collective, that features recordings from the inside of factories and buildings, like a former Stasi prison. It’s the costumes and the way in which Urs Schönebaum’s lighting continually transforms them from soft to hard, from protection to a weapon. 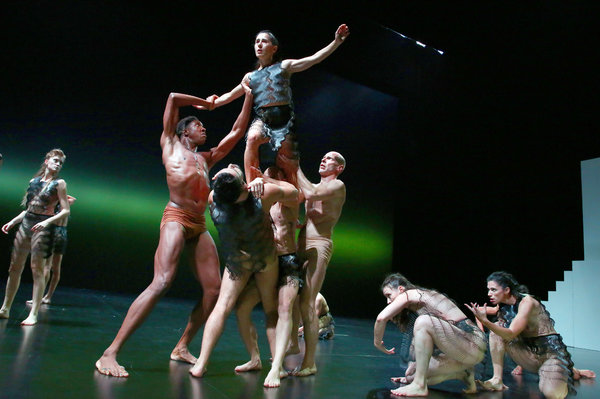 For “Kreatur,” performed at the Brooklyn Academy of Music’s Howard Gilman Opera House on Friday, the Dutch designer Iris van Herpen has produced an array of sculptural designs that encase the body, beginning with the opening look: Dancers, emerging out of darkness, don fantastical creations constructed from laser-cut steel. Semitransparent, they surround the flesh like the downy white threads that sprout on a dandelion after its yellow petals fall away.

These dancer-phantoms gradually shed their costumes, or skin, in favor of the real thing: Wearing only briefs, they inch across the stage slowly and methodically, melting from one contorted pose to the other. It becomes tiresome fast. They let us see how hard they are working, and that’s a distraction even as translucent sheets of mylar are wrapped around the nearly nude dancers, and their magnetized flesh shines through.

For a time, there is a prickly quality to the choreography, in which fingers splay and chests contract to lend the sensation that the performers are no longer exactly humans, but — and this is a word I like to avoid in describing dancers, yet since it is the name of the show — creatures. A montage of scenes come and go. At one point, the dancers climb a white staircase and squeeze together on its platform. Writhing and twisting, they struggle to maintain their footing, but it’s inevitable that a couple slip off.

“Stop crying!” one dancer tells another, and when she finally does, she follows it up with, “Stop breathing!” When an ominous porcupine figure appears — its needles shimmer dangerously — the group reacts with fear and then overpowers it. The surprise is that after they remove its prickly head, it is revealed to be a woman and not a man.

Eventually this 90-minute work, which has many parts but never becomes whole, winds down as an ode to love. As birds chirp faintly in the distance and the lighting shifts to daybreak, a voice-over announces, “My heart is empty but the songs I sing are filled with love for you.” The song “Je t’aime … moi non plus” plays, and select dancers lip-sync the lyrics, as sung by Jane Birkin and Serge Gainsbourg.

It gets more physical as two men kiss passionately, while other couples slap their bodies into each other — chest to chest, hand to thigh. “Kreatur” may begin with covered flesh; by the end, we not only see it, we hear it. The final image, of the dancer Claudia de Serpa Soares wrapped in plastic, leaves behind a message: We all have skin, and we don’t need armor to protect us if we rely on one another.