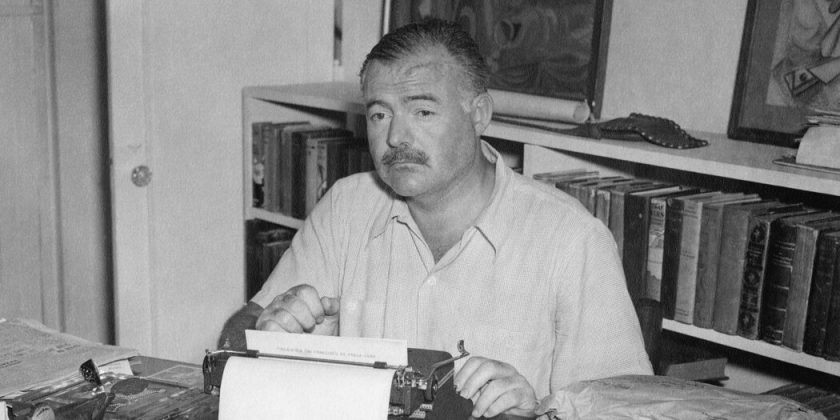 One of the more unsettling moments in “Hemingway,” the latest documentary from Ken Burns and Lynn Novick, finds Ernest Hemingway, big-game hunter, chronicler of violence and seeker of danger, doing one thing that terrified him: speaking on television.

It is 1954, and the author, who survived airplane crashes (plural) earlier that year in Africa, had been awarded the Nobel Prize in Literature. He agreed to an interview with NBC on the condition that he receive the questions in advance and read his answers from cue cards.

The rare video clip comes after we’ve spent nearly six hours seeing the author create an image of virile swagger and invent a style of clean, lucid prose. But here Hemingway, an always-anxious public speaker still recuperating from a cerebral injury, is halting and stiff. Asked what he is currently writing about — Africa — his answer includes the punctuation on the card: “the animals comma and the changes in Africa since I was there last period.”

It’s hard to watch. But it is one of many angles from which the expansive, thoughtful “Hemingway” shows us the man in full, contrasting the person and the persona, the triumphs and vulnerabilities, to help us see an old story with new eyes.

Burns, whose survey of American history is interspersed with biographies of figures like Jackie Robinson, Mark Twain and Frank Lloyd Wright, might have taken on Hemingway at any time over the past few decades. But there is an accidentally timely aspect to many of his timeless subjects. His “National Parks” in 2009, for instance, came in time to echo the Obama-era battles over the role of government.

Now “Hemingway,” airing over three nights starting Monday on PBS, comes along as American culture is reconsidering many of its lionized men, from figures on statues to Woody Allen. And there are few authors as associated with masculinity — literary, toxic or otherwise — than the writer who loved it when you called him Papa.

It’s tempting to say that Hemingway’s macho bluster doesn’t hold up well in the light of the 21st century, but it didn’t go unnoticed in the 20th either. He embraced manliness as a kind of celebrity performance. He fought with his strong-willed mother, who accused him of having “overdrawn” from the bank of her love. He married four times, finding his next wife before leaving the previous one, wanting each to give herself over to supporting him.

He clashed spectacularly with his third wife, the writer Martha Gellhorn (played in voice-over by Meryl Streep), who matched him well, maybe too well to last. A free spirit who resisted marriage at first, saying “I’d rather sin respectably,” Gellhorn would not sideline her ambitions for his. (You might find yourself wishing you were watching her documentary.) 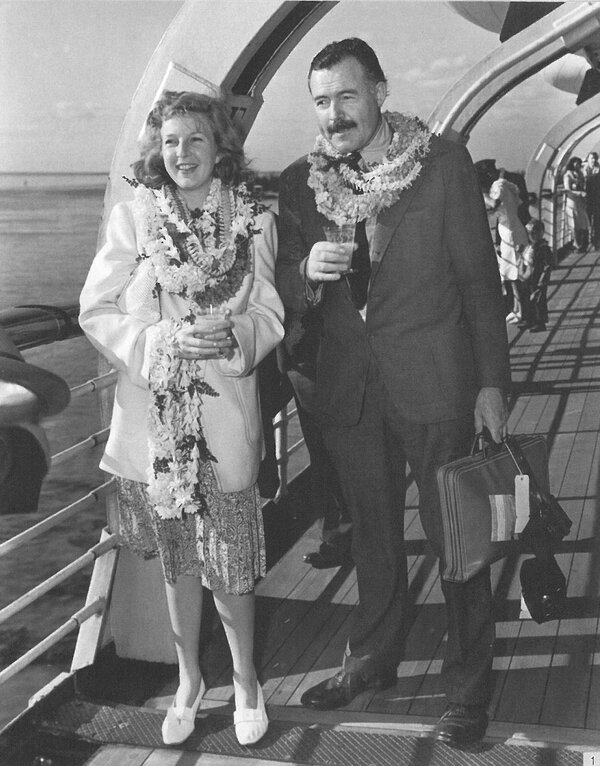 Eventually he found a fourth wife, Mary Welsh, who wrote in her diary that he wanted his wives to be “completely obedient and sexually loose.” Hemingway wrote to his son about Gellhorn, “I made a very great mistake on her — or else she changed very much — I think probably both — but mostly the latter.” The journey that sentence takes is a short story in itself.

But “Hemingway” also complicates the popular image of Hemingway as he-man woman-hater (or, at least, woman-dismisser) in his life and his work. Starting with his early childhood, when he mother enjoyed “twinning” him and his sister, dressing them identically as boys or as girls, the film argues that Hemingway had an “androgynous” mind-set that disposed him to inhabit male and female perspectives in his work. (He also, the film says, experimented with gender-switching role-play with his lovers.)

“Hemingway” takes as a test case the story “Up in Michigan,” which ends with a date rape. It was controversial at the time; Gertrude Stein called it “inaccrochable,” like a painting unsuitable to be hung. But the Irish novelist Edna O’Brien unpacks how Hemingway’s raw, tactile prose centers the woman’s thoughts and sensations. “I would ask his detractors, female or male, just to read that story, and could you in all honor say this was a writer who didn’t understand women’s emotions and hated women?” she asks. “You couldn’t.”

O’Brien is no one-sided Hemingway booster. (She dismisses “The Old Man and the Sea” as “schoolboy writing.”) But she is the M.V.P. of a group of literary commentators here that also includes Mario Vargas Llosa, Mary Karr and Tobias Wolff, all of whom help “Hemingway” do the difficult work of describing an internal creative process from the outside.

The series lays out how Hemingway stripped away excess from his language so that the reader would supply the emotion and thus feel it more deeply. He was inspired by Paul Cézanne, who would repaint the same view to find new ways of seeing it. He admired Bach for his mastery of repetition and used the device to rhythmic, incantatory effect in his prose.

To the usual Burns toolbox of photo pans and archival film, “Hemingway” adds typewriter imagery — keys hammering on pages like irons in a smithy — and animations of manuscript editing.

Its most powerful device, though, is the author’s own words. As sometimes happens with Burns’s celebrity voice casting, I found Jeff Daniels as Hemingway distracting at times for his recognizable voice. But Daniels (like Hemingway, a Midwesterner) gives the passages of fiction and memoir a velvet punch.

You have to convey the power of the writing, after all, to show how literature is still shaped by Hemingway’s ideas of clarity, of mortality, of gender. “He changed all the furniture in the room,” Wolff says. “And we all have to sit in it.”

This is true whether we sit easily or not. “Can you separate the art from the artist?” is a heated and dogmatic argument these days. You must sever the two, in a spirit of see-no-evil, to preserve the precious product; or you must handcuff them together, so that any judgment of a life becomes the judgment on the work, and the work a forensic rap sheet against its creator.

“Hemingway” doesn’t separate art and artist. Hemingway didn’t either. He created a public “avatar” that sometimes overshadowed his work (and threatened to make him a self-caricature) and wrote his life into his art (sometimes with cruelty toward friends and peers). But the documentary also recognizes that life and art don’t always correlate neatly or simply.

The resulting biography is cleareyed about its subject but emotional about his legacy. It celebrates his gifts, catalogs his flaws (which included using racist language in his correspondence) and chronicles his decline with the tragic relentlessness its subject would give to the death of a bull in the ring.

The biggest compliment I can pay “Hemingway” is that it made me pull my “Collected Short Stories” off the shelf after years, to read his piercing, full-feeling work in a new light. This life story is not entirely a pretty picture. But to quote its subject, “If it is all beautiful you can’t believe it. Things aren’t that way.”