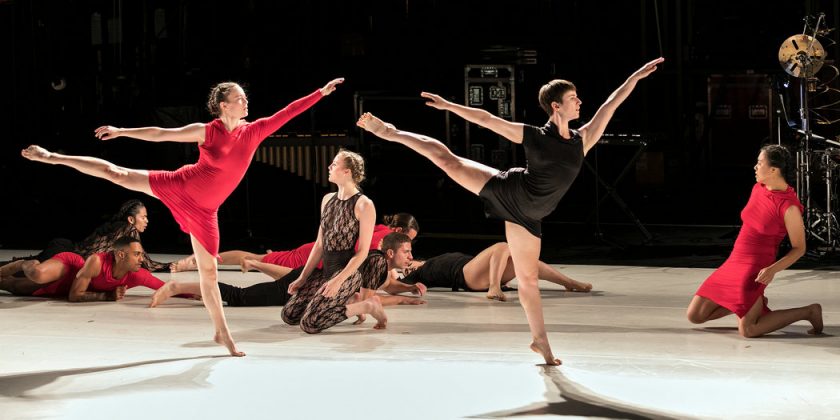 Since 2013, when the Israeli-born choreographer Danielle Agami moved to Los Angeles, she has been making a name for herself there, winning awards with and without her company, Ate9. New Yorkers don’t have many chances to check out her work, but one came on Saturday, when her troupe performed at the Schimmel Center. And the piece, “Calling Glenn,” alludes in its title to an additional attraction: Glenn Kotche, the drummer for the alternative rock band Wilco.

The curtain rises on him, about to strike a vibraphone, and he stays visible throughout the 70-minute work. Yet apart from an interlude during which he comes forward to drum the stage, Mr. Kotche keeps to the dim rear, usually behind his heavily accessorized drum kit or another instrument, receding from focus even when he’s whirling a bullroarer overhead. We’re aware of his rumpled presence (the tousled hair, the hoodie) but also that he isn’t the show.

The dancing is, and it commands attention. Ms. Agami’s hyper-flexible dancers can bend every which way, unpredictably. They can strut and pose like catwalk models and leap like frogs, but most often they crouch and collapse and press their faces to the floor.

This style is immediately recognizable. It’s unmistakably derived from that of Ohad Naharin, the longtime artistic director of Batsheva Dance Company. Ms. Agami is an alumna of that troupe and a noted teacher of Gaga, the globally popular movement language Mr. Naharin invented. 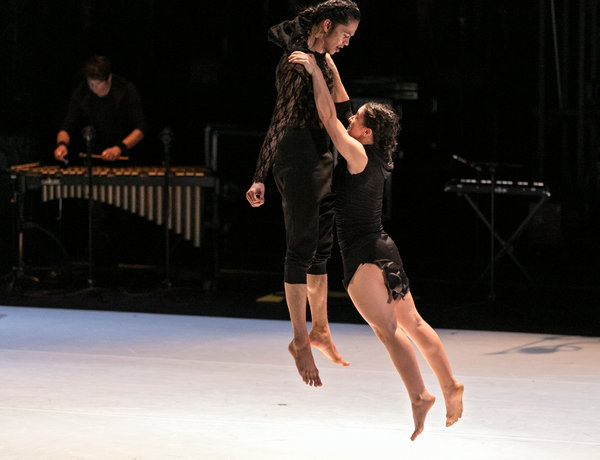 Not every good choreographer develops a language, and Ms. Agami speaks her borrowed tongue with considerable skill. She arranges her dancers with variety, gathering them in audience-assaulting unison or contrapuntal patterns to Mr. Kotche’s serviceable beat (which is more pounding than polyphonic). She combines her dancers into a coherent ensemble while giving each member individualized moments.

If you like Gaga, you’ll probably like what she does with it. For me, her choreography gets stuck where much Gaga-derived dancing does. Intended to direct a dancer’s focus toward inward sensation and liberate a dancer from visual conventions (no mirrors allowed in Gaga studios), it tends to produce an ostentatious eccentricity, a new convention that’s artificial and distancing.

Maybe Ms. Agami is aware of the problem, and is trying to address it in “Calling Glenn” with knockabout humor. While trying to watch Mr. Kotche play a glockenspiel, the dancers block one another’s sightlines (that old gag). Later, men in dresses knock one another away from microphones, each going full diva as Mr. Kotche provides sound effects in place of song. This bit gets a gender-politics punch line, as women take the mics away and one stuffs the phallic object into her pants.

Is this ordinary comedy meant to be humanizing? The closest the dance comes to tenderness is in a chain of male-female duets. Fitting foot to face, slotting chin into shoulder, poking, slapping, wrestling, the dancers act out shifts of power that are inventive within a familiar mode. When one jumps through hoops made by the other’s body, it’s sweet.

And at the end of that sequence, when two of the pairs turn away from their partners and start kissing members of the same gender, the twist feels almost fresh.