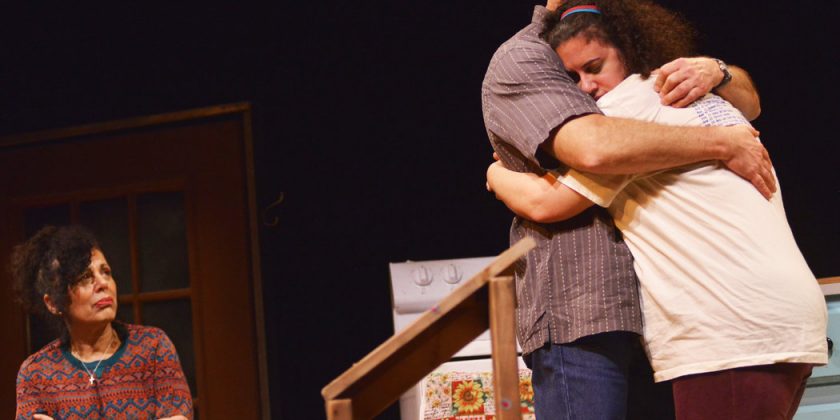 At first glance it’s hard to tell when “Bernie and Mikey’s Trip to the Moon” takes place. The set’s tired kitchen and living room could have been lifted from any of the past six decades. The characters’ clothing is unburdened by fashion trends. Elvis Presley is playing. We could be watching “The Honeymooners” or “Roseanne.”

Scott Aiello’s play, which just opened at 59E59 Theaters in Manhattan, passingly establishes that we are in the 1990s — the clunky corded phone helps — but avoids references to the news, technology or pop culture. The focus stays tight on the working-class Vincolo family as they negotiate life with an intellectually disabled daughter in a Chicago suburb: Bernie, now in her 20s and still playing in a sandbox.

Bernie (Stephanie Gould), alternately docile and demanding, rude and sweet, stubborn and accommodating, sets the pace of the Vincolos’ existence. Her perpetually harried mother, Gladys (Margo Singaliese), is the very picture of long-suffering grit, busying herself making what we suspect is a bottomless supply of pasta and gravy — this is an Italian-American brood, after all — while her father, Mike Sr. (Jordan Lage), finds an escape tending his bar, the Scorpio Lounge.

As for the kind, soft-spoken Mike Jr. (Forrest Malloy), he is accepting of a future caring for his sister when their parents are gone, and resigned to his dead-end job at a chain restaurant.

What he is not resigned to anymore, however, is being considered a friend by Laura (Ismenia Mendes), the pretty co-worker he loves. When she flees after his romantic declaration, Mikey, as he is known, is crushed but also spurred into action. Things can’t continue as they always have.

Mr. Aiello, an actor making his playwriting debut, works in a vein we don’t see much on our stages nowadays, which could be described as no-nonsense American realism — an antecedent would be the teleplays Paddy Chayefsky wrote in the 1950s, like “Marty.”

Claire Karpen’s production for the Strangemen Theater Company — the troupe behind the 2015 Off Broadway hit “The Woodsman” — stays true to the play’s traditional approach. The cast eschews actorly fireworks, starting with Ms. Gould, who herself has a mild form of cerebral palsy and does not shy from Bernie’s difficult side. The restrained Mr. Malloy is also very good at suggesting the inner life of a decent man who could easily have skidded into sad-sackdom. (The set is by James Ortiz.)

This delicate approach has its limits, though. The writing is unshowy at best, but can veer into awkwardness, especially in the scenes with the clichéd, underwritten Laura — there is a thin line between classic and passé.

More of a problem is that the show is content to flit from setback to crisis without dwelling on any of them. Mr. Aiello suggests caring for Bernie has not had an entirely positive impact on her parents’ relationship, but does not explore that subplot. The young woman also has a suitor, Jeff Goldblum (Benjamin Rosloff), who is on the autism spectrum. This raises the issue of their agency, particularly when it comes to sex, but Mr. Aiello mostly uses the situation for levity.

Still, “Bernie and Mikey’s Trip to the Moon” does elicit good will, if nothing else for its stubborn refusal to follow theatrical fashion.