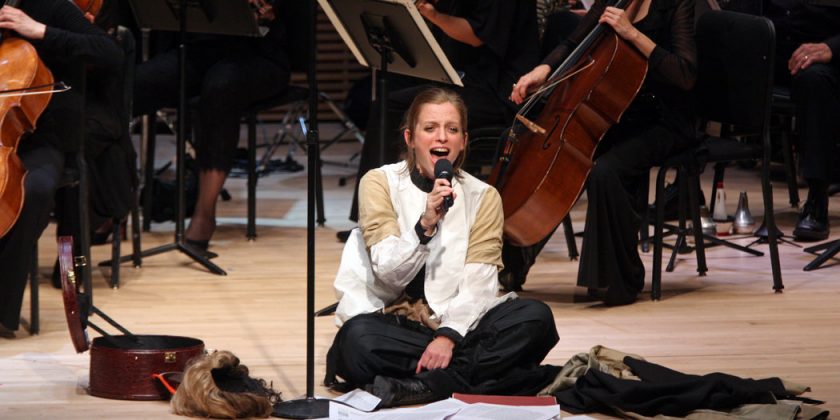 Time travel. Tennis. An all-female lineup of composers, a mostly black roster of soloists, and one violinist bowing the wrong way.

The American Composers Orchestra gave classical conventions the cold shoulder on Friday at Zankel Hall with a program called “Phenomenal Women.” That title was taken from one of two premieres on offer, a work by Valerie Coleman that was in turn inspired by a poem of the same name by Maya Angelou. The spirit of that poem — sassy, sensual and confident — hovered over this evening full of surprises.

This orchestra, led by the indefatigable George Manahan, has run a robust and diverse commissioning program for years; by happy accident, almost exclusively female composers are featured this season. (The ensemble will play a single piece by Morton Feldman in April.)

Friday evening opened with a birthday celebration for the composer Joan Tower, who turned 80 in September. In a humorous onstage interview, she chafed at the idea of being framed as the “traditionalist” on this occasion, alongside Ms. Coleman, born in 1970, and Alex Temple, 35.

But there was nothing staid about her “Chamber Dance” from 2006. Slinky, fast-flowing and infused with a strong sense of rhythm, it’s an infectious piece of orchestral writing.

Ms. Coleman’s “Phenomenal Women” is a six-part concerto grosso for wind quintet, written for the ensemble Imani Winds. (She was the group’s founding flutist.) The juxtaposition of instrumental solos, chamber ensemble and orchestral textures created moments of memorable freshness and color.

Five movements are dedicated to women who inspired Ms. Coleman — Angelou, the NACA (later NASA) mathematician Katherine Johnson, the tennis star Serena Williams, former first lady Michelle Obama, and Claressa Shields, an Olympic boxer. This allowed Ms. Coleman to show off her gifts for tone painting. She brilliantly captured the thwack-thwack of a tennis ball bounced in preparation for a serve. Staccato oboe notes tapped out a stream of digits in the movement dedicated to Johnson, while excited ascending figures traced the eventual liftoff of a spacecraft. The five Imani players performed the music with charisma and verve.

Tucked between these portraits was a poignant movement dedicated to the mothers walking in the caravan of migrants headed for the American border. A solo flute (the elegant Brandon Patrick George) wove echoes of Brahms’s classic Lullaby into a series of increasingly agitated flourishes. The music spoke of both tenderness and terror.

The evening ended with Ms. Temple’s brilliant and zany “Three Principles of Noir,” a kind of cabaret cantata about a historian who decides to travel back in time to kill the great-great-grandmother of a rival scholar who has stolen her research. (The plan goes awry.) Meaghan Burke was the outstanding soloist, convincing both in long stretches of spoken monologue and in Brechtian sung ballads, which seemed tailored to her street-smart, feline voice.

Ms. Temple’s music zooms across time, blending Prohibition-era cheek with recorded electronics that evoke mid-20th-century sci-fi. The orchestra proved an enthusiastic partner throughout. My eye kept wandering to Sander Strenger, a rare example of a violinist who holds the instrument with his right arm and bows with his left. On a night dedicated to minorities in music, he captured this ensemble’s knack for playing against the grain.