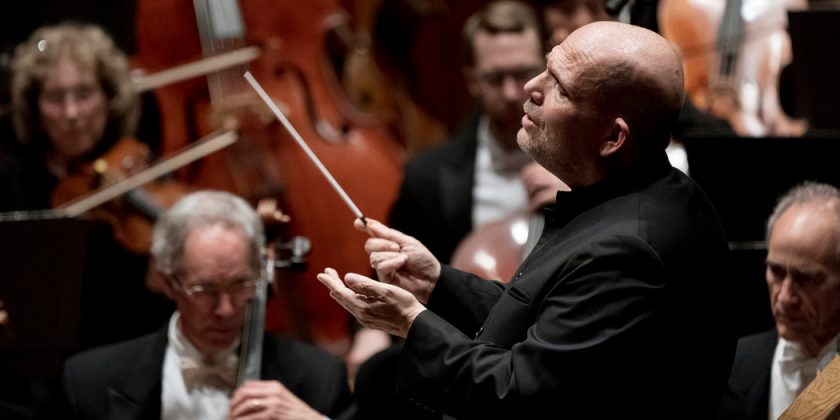 Every musical composition makes a statement. But in purely instrumental works, that statement can be vague — even if the ideas, images or emotions that are suggested are unforgettable.

Sometimes, however, a composer explicitly tries to make an ideological point or to respond to a political situation in a symphonic work. That’s the theme of the New York Philharmonic’s three-week “Music of Conscience” series, with which Jaap van Zweden is ending his first season as the orchestra’s music director.

[Read about the Philharmonic’s next season.]

Judith Nelson, a Philharmonic violist who is retiring after 36 years and was honored during a ceremony when the series began on Wednesday at David Geffen Hall, said, in explaining why classical musicians are drawn to their art form, that music “goes beyond what words can explain.”

She’s right, and there are potential downsides when a composer tries to convey a specific message through instrumental means: The results can easily seem inflated or pontifical. Maybe what we love best about music is that it affects us powerfully while avoiding being too specific.

Is the program’s opening work — Shostakovich’s Chamber Symphony, an arrangement for string orchestra of that composer’s String Quartet No. 8 — political? Shostakovich worked under the threat of Soviet tyranny and artistic repression. In many of his pieces, this quartet especially, you sense him both protesting and grieving over the brutality of authoritarian rule.

Or do you? Shostakovich’s statements almost always seem veiled. For many, that ambiguity is just what makes his music profound.

I usually prefer this work in its original, intimate string quartet version, from 1960. (The arrangement was made by Rudolf Barshai in 1967.) But in the dusky and eloquent performance Mr. van Zweden led, he drew rich sound and depth from the strings while maintaining chamber-music clarity and directness.

The piece is run through with a four-note motif (corresponding to letters from the composer’s name) that links almost every passage in this five-movement, 25-minute score. The performance conveyed the plaintive brooding of the first movement and the driving intensity of the second. Is the biting, waltzing third movement a bitterly ironic jab at tyranny? To their credit, Mr. van Zweden and his players had you wondering.

Including Beethoven’s “Eroica” Symphony on this series ventured close to cliché: In an oft-told story, Beethoven, flush with anti-monarchical fervor, dedicated the symphony to Napoleon, only to void that gesture after Napoleon declared himself emperor. So the symphony was dedicated instead to a nameless hero. In a way the hero is Beethoven, who with this titanic score showed the world what a colossal creation a symphony could be.

The performance was impressively vibrant and incisive. But, as is sometimes his way, Mr. van Zweden pushed too hard for briskness and energy, especially during the first movement. The playing was sometimes breathless. Performances that best convey the heroism of this symphony have more breadth and weight.

This program continues through Tuesday, and the “Music of Conscience” series through June 8, at David Geffen Hall, Lincoln Center; 212-875-5656, nyphil.org.

Anthony Tommasini is the chief classical music critic. He writes about orchestras, opera and diverse styles of contemporary music, and he reports regularly from major international festivals. A pianist, he holds a Doctorate of Musical Arts from Boston University. @TommasiniNYT