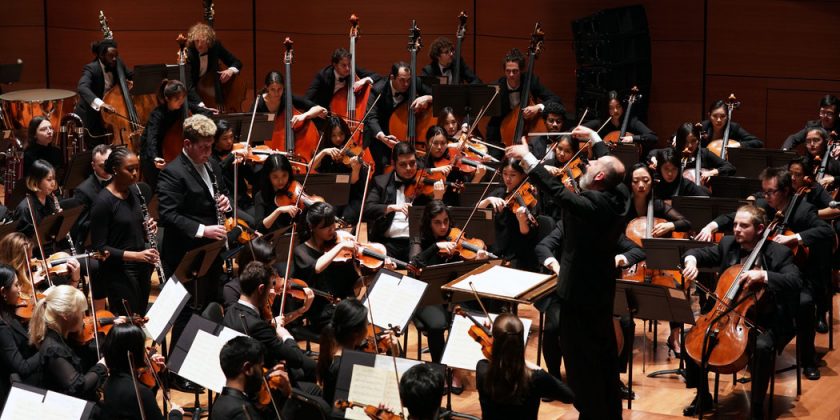 Julius Eastman died destitute in 1990, but his Symphony No. 2 inhabits a world of plenty. He composed this work, which received a belated premiere on Tuesday at Alice Tully Hall, as a parting gift to a lover in 1983. By then Eastman had been evicted from his home — his scores stacked on the curb along with the rest of his things — and had become acquainted with New York City’s park benches and shelters. Somehow, he still composed music of cosmic grandeur.

A familiarity with the biography of Eastman — black, gay, emotionally vulnerable — is not necessary to appreciate his music, which can be ceremonial, cunning and brash. Still, it was hard not to listen for hints of instability during the exciting performance on Tuesday by the Mannes Orchestra, led by Luciano Chessa, who also edited the score.

[Read about the rediscovery of Eastman’s Symphony No. 2.]

Yes, the work ends abruptly, on a handful of exhausted staccato notes. And embedded in a texture of spendthrift immensity — stacked with extra tubas, contrabassoons, bass clarinets and 24 timpani — individual voices sound frightfully naked. But what’s most striking is the composer’s command of these monstrous forces.

The work opens with unison strings tracing a meandering line at a ritualistic pace. A dull, dissonant chord releases a dark haze, and from there on the music proceeds in an opposition between human gait and atmospheric forces. For much of the work’s duration, the timpani keep up a low, ominous rumble. When they ratchet up the volume, the sound rises like a tsunami that temporarily submerges everything else in darkness.

The end is carried by low wind instruments playing at the upper edge of their comfort zone, where the sound grows reedy and tense. The feeling that lingered for me as the audience erupted in applause was one of sacrifice, or at least surrender.

The concert opened with Sarah Kirkland Snider’s “Something for the Dark,” which also approaches sound as a vast, malleable substance. In this sophisticated piece, repetition transforms the emotional charge of musical motifs. A turn of phrase may appear pretty at first, then take on shades of nostalgia before registering as a creepy obsession haunting the ear. Ms. Snider skillfully draws a wide arc, with throbbing brass accents and slashing chords driving up tension. The work ends quietly, as if on a question.

The evening ended with an inspired performance of Einojuhani Rautavaara’s Symphony No. 3, a work from 1960 that uncannily manages to use serial technique in a way that sounds like Bruckner. The fine orchestra, led here, as in Ms. Snider’s work, by its music director, David Hayes, beautifully brought out the symphony’s Neo-Romantic textures and sweeping melodies. The Scherzo, including hard-driving passages and a terrifying crescendo up to a cliff’s-edge silence, spoke of the players’ courage and trust in Mr. Hayes. For me, the quality of this student orchestra was as much a revelation as the dark brilliance of Eastman’s rediscovered work.