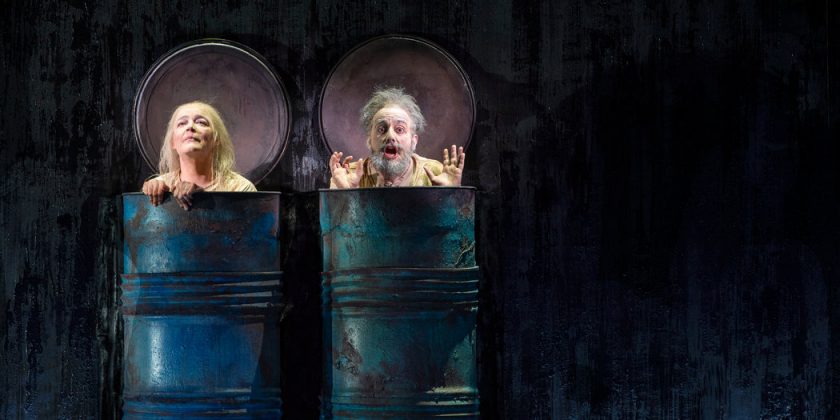 MILAN — In the middle of Samuel Beckett’s bleak but endlessly wry play “Endgame,” a character tells a joke about a man who goes to the tailor to get a pair of pants. The tailor dithers and dawdles, making one tiny change at a time.

Finally, the customer explodes: God made the world in six days, he screams, “and you are not bloody well capable of making me a pair of trousers in three months!”

The tailor answers, “But, my dear sir, my dear sir, look” — with a disdainful gesture — “at the world, and look” — lovingly, proudly — “at my trousers!”

The punch line had extra relish at the Teatro alla Scala here in Milan on Thursday when “Fin de Partie,” the eminent Hungarian composer Gyorgy Kurtag’s operatic adaptation of “Endgame,” had its long, long-awaited premiere. Mr. Kurtag, 92, has taken a protracted path to this patiently, perfectly tailored work, his first opera.

[Read our profile of Mr. Kurtag.]

Over the past decade, we were told time and again that the opening was coming. Time and again, the pants were not quite ready. “Fin de Partie,” based on Beckett’s original French version of the play, became the white whale of contemporary music.

As Mr. Kurtag turned 85, then 90, we could be forgiven for quietly fearing it would never be finished. And it wouldn’t, perhaps, have been too much of a surprise if it hadn’t been: A master of miniatures, best known for collections of pieces a few dozen seconds each, Mr. Kurtag had stubbornly resisted the idea of working on a vaster canvas.

But Beckett had already provided him with vital inspiration for other works over the years. And “Endgame” — its text, like Mr. Kurtag’s classics, an assemblage of small self-sufficiencies surrounded by space — was an apt partner for what the play calls “the prolonged creative effort.” If Mr. Kurtag felt uncertain about how to sustain his gnomic style over a two-hour span, it’s undetectable in an opera that, even constructed as a series of discrete “scenes and monologues,” unfolds with the confidence — the paradoxically unsettled serenity — of his best music.

He can revel in mood, color and agile, even raucous, rhythms because there is barely a plot to convey. A sick man in a wheelchair (Hamm), his companion (Clov), his father (Nagg) and his mother (Nell) recall the joys and sorrows of the past and curse the indignities of the present and future. That’s all; that’s everything.

Shuffling around nervously, Clov (the robustly gruff baritone Leigh Melrose) is characterized in jittery blots of music, as if he consists entirely of punctuation marks. The orchestra quietly trembles under the bass Frode Olsen’s more authoritative roars as Hamm. Old Nagg (the tenor Leonardo Cortellazzi) and Nell (the contralto Hilary Summers), stuffed by Beckett into side-by-side ashcans, exist in a sphere of ethereal nostalgia and thread-thin high notes that Ms. Summers, in particular, spins with the eerie softness of elderly skin. 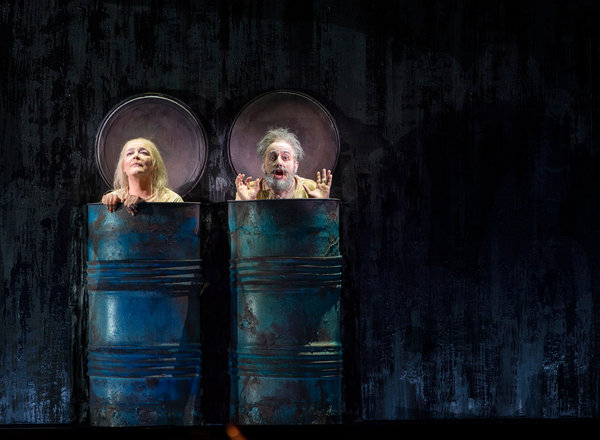 Though spare, Mr. Kurtag’s music isn’t severe. The string sound has been pared back, so the ensemble feels transparent and winds-heavy, with an airy chamber-music intimacy, whipping occasionally into passionate outpourings and embroidered here and there with the coppery twang of cimbalom. The vocal line is often mirrored in the orchestra, giving a feeling of purity, coherence and deceptive simplicity. (There is nothing simple about it.)

There are echoes of Monteverdi in the piece’s declamatory, text-forward quality; Debussy’s “Pelléas et Mélisande,” in its atmospheric ambiguity; Berg’s “Wozzeck,” in its episodic structure and concentrated expression. Glistening and nimble, the Scala orchestra is conducted by Markus Stenz, who leads an exceptionally delicate score — its balances and pauses fragile and exposed — with naturalness and a sense of spontaneity.

Pierre Audi’s staging provides some of the physical comedy Beckett intended, while slyly inverting the play’s scenic indications. Rather than looking out from an interior, the characters here are outside a small, grim house, looking in. (The designer is Christof Hetzer.) The house, partly overhung by the shells of yet larger structures, rotates with each scene change; Hamm, in turn, rotates in his wheelchair. It is a little solar system onstage, a theater of the cosmos.

I had worried that Mr. Kurtag would stint the music-hall roots of Beckett’s dramaturgy, but bits of accordion and whistles peep out from the orchestra, faraway glimpses of vaudeville. The opera extracts roughly half of the play, meaning we lose some of the slapstick circularity; what’s gained is starkness, each episode standing in harsh isolation.

We lose, too, the full depth of the relationship — defined by Beckettian repetition — between Hamm and Clov. So the opera’s final scene of simultaneous separation and togetherness, while powerful, doesn’t quite break your heart. Nagg and Nell, their music luminous, are now the emotional center — appropriate for a work that is, if not quite autobiographical, then at least resonant on the subject of growing old alongside one’s mate. (Mr. Kurtag’s wife of more than 70 years, Marta, has long been his close collaborator in composition and performance.)

“Fin de Partie” is a farewell not just to a life and a marriage, but also to a whole culture. Mr. Kurtag is one of the last who remain of the generation of avant-garde composers that came of age during World War II and in its wake: Boulez, Ligeti, Henze, Stockhausen, Schnittke. Even if the great final scene equivocates — modernism is always on the verge of leaving, it seems to say, yet it is also always here to stay — the opera, drawn from a play that Mr. Kurtag saw in Paris as a young man, is truly goodbye to all that.

It’s a world that ends, in his telling, with both a bang and a whimper: apocalyptic brass chords alternating with a hushed stillness, off which rises a mist of cimbalom and suspended cymbal. This kind of quick transition from seizure to stillness is a characteristically Kurtagian move, as in the final of his six “Moments Musicaux” for string quartet, from 2005, when a sudden ripping roar fades to a faint march, pricked by an even fainter violin.

It is a gesture that challenges the very notion of an ending. And Mr. Kurtag may not be done yet; he has mulled filling in some of the gaps he has left in creating the “Fin de Partie” libretto. Future presentations — the work travels next to Amsterdam, in March — may well set more of the play’s text. But it by no means feels curtailed in its current form.

Look at our world, indeed, then look at this exquisite opera, a miracle of dedication, craft and care. This, as Clov says near the end of the piece, is what we call making an exit.

Endgame
Through Nov. 25 at the Teatro alla Scala, Milan; teatroallascala.org. 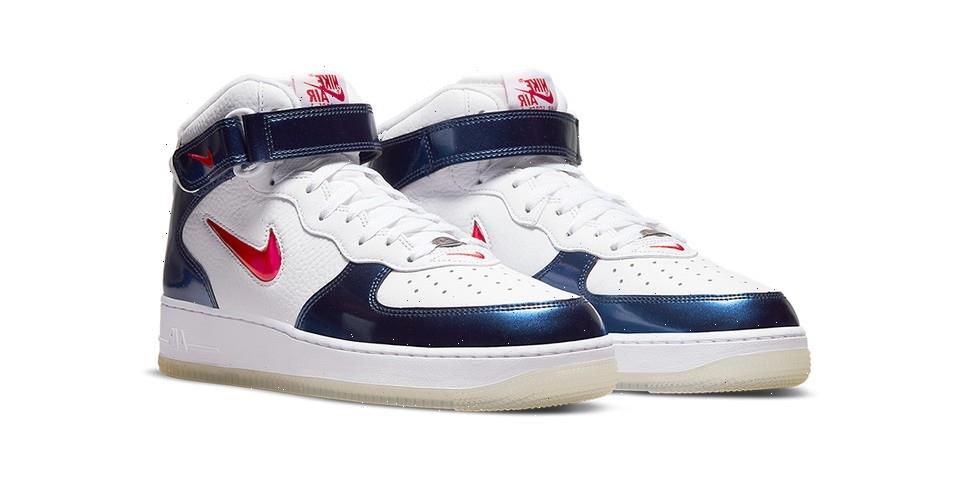