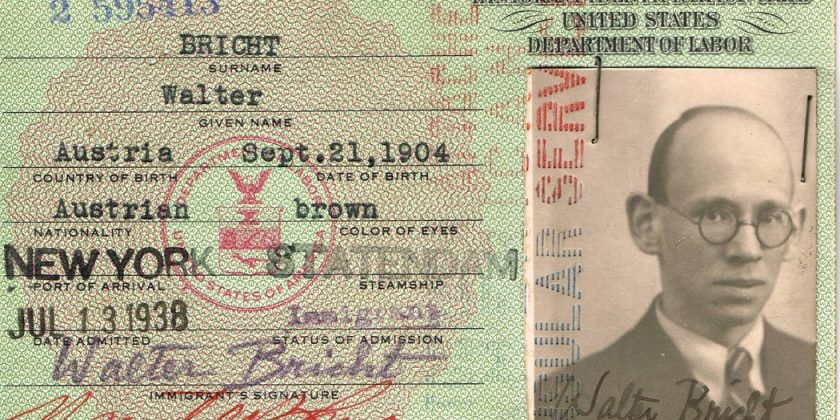 VIENNA — When Walter Bricht was forced to emigrate from Austria in 1938, he was one of the capital’s most promising musical figures. Performances of his first symphony were scheduled with the Vienna Philharmonic, which performed the premiere of his First Piano Concerto, as well as the Berlin Philharmonic and Staatskapelle Dresden. Those plans never came to fruition once it was revealed that he had three Jewish-born grandparents.

This year, his estate returned from the United States not only to the city of his birth but also to the building where he was a star student. The exil.arte center, founded in 2006 as a society and operating with its own fireproof vaults, recital facilities, lecture space and more at Vienna’s University of Music and Performing Arts since 2016, is archiving the manuscripts of neglected composers and performers, and also, perhaps most importantly, making sure the music is heard.

In contrast with the return of Nazi-looted artwork to their original owners, which has been required by law in Austria since 1998, exil.arte hopes to revive the legacy of musical figures who remained connected to Austrian culture until their death. The center produces recordings in collaboration with the label Gramola Vienna and holds a concert series at Vienna’s ORF Radio Café. More recently, it was entrusted a new critical edition of Erich Wolfgang Korngold’s music, in collaboration with the publisher Schott, that will include his film scores for the first time.

Through July, exil.arte is home to the exhibit “Wenn ich komponiere, bin ich wieder in Wien” (I return to Vienna when I compose), marking a century after the fall of the Austro-Hungarian empire and eight decades after Austria’s annexation by Nazi Germany. Korngold’s tailcoat and pen are on display amid the photos and biographies of 50 musical figures, including the violinist Alma Rosé, who escaped to London with her father, Arnold Rosé, a concert master with the Vienna Philharmonic, but died in Auschwitz (she was deported after traveling to The Hague in 1940, when Dutch forces surrendered to the Nazis), and the conductor Theo Buchwald, who founded the Peruvian National Symphony Orchestra. 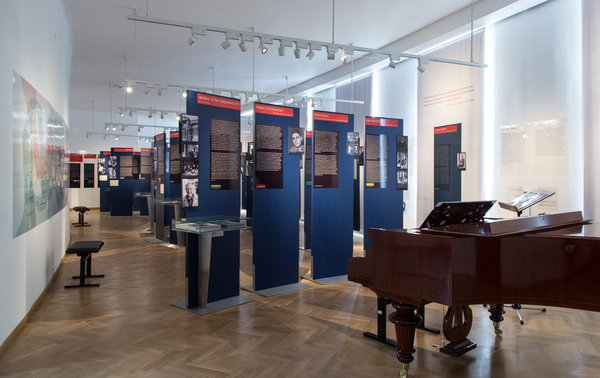 Vienna’s leading musical institutions were slow to fully delve into how Nazi occupation had damaged Austrian cultural life. Former Nazi Party members were well represented in the Philharmonic into the 1960s, with the trumpet player Helmut Wobisch acting as executive director despite having served in the SS. Such uncomfortable facts were first exposed in the early 1990s, and the past decade has seen a surge in scholarly activities.

In 2011, the historical biography “The Political Orchestra: The Vienna and Berlin Philharmonics During the Third Reich,” by Fritz Trümpi, a professor at the University of Music and Performing Arts, revealed the extent to which both orchestras were used by the regime. That same year, the Vienna Philharmonic began gathering and publishing research about victimized players (nine, including Arnold Rosé, made it into exile; seven more did not survive).

In terms of programming, Professor Trümpi has documented that Wagner and Bruckner essentially replaced Mendelssohn and Mahler in 1938. It was not until the 1960s, thanks to Leonard Bernstein, that Mahler regained a substantial footing in the orchestra’s repertoire.

But exil.arte is covering a chapter in musical history that is still largely neglected. Bricht, Wilhelm Grosz, Hans Gál and other composers among the 14 estates represent what Michael Haas, the center’s senior researcher, called a “strain of uniquely Viennese modernism” that was not “plowing down the Schönbergian road of atonality.”

Their tonal but eclectic idiom fell between the cracks as the 20th century became increasingly split between the avant-garde and the commercial music industry. Exile also had detrimental effects on these composers’ output.

Bricht produced only scattered works and eventually stopped altogether, spending his last years as a voice teacher at the Indiana University School of Music. (He died in 1970 at 65.) His first and only symphony, recently recorded by the Fort Wayne Philharmonic, combines free counterpoint, inebriating harmonies and colorful instrumentation into what Mr. Haas called the “promise of greatness.”

Other estates provide insight into the importance of folk and popular music, a “vast area” that Mr. Haas said was “wiped out.” Slavic folklore pervades the works of Jan Urban, a Czech-born composer who immigrated to Serbia and fought against Austria during World War I. Robert Freistadtl (born Frey) was a successful composer of operettas, collaborating with the leading director Max Reinhardt, only to write in a state of homesickness from England.

Sitting in an office once occupied by the Austrian composer Franz Schmidt, Bricht’s teacher, the exil.arte founder Gerold Gruber said he was relieved that a once-taboo topic had garnered public interest. “There is a giant crater that at a certain point has to be filled with life,” he said.

This year, the Vienna Philharmonic received the estate of a former concertmaster, Franz Mairecker, who maintained correspondence with players such as the cellist Friedrich Siegfried Buxbaum, a member of the Rosé Quartet in British exile, as well as Holocaust victims.

The centenary of Bernstein’s birth also provided an opportunity for the orchestra’s archivist, Silvia Kargl, to re-examine his history with the orchestra. Her article “A Transatlantic Musical Affair — Leonard Bernstein and the Vienna Philharmonic” documents how he only slowly warmed up to the relationship.

Bernstein ultimately left a lasting imprint, introducing works by Shostakovich and Sibelius, but also cultivating a specifically Viennese repertoire, whether with Mozart or Mahler.

If it remains a tragedy that composers such as Bricht or Grosz were ousted from this tradition, Mr. Haas expressed hopes that they would gain recognition as part of the city’s 20th-century fabric. “Never in a million years,” he said, “did they think their music would be performed just as a memory to the Holocaust.”