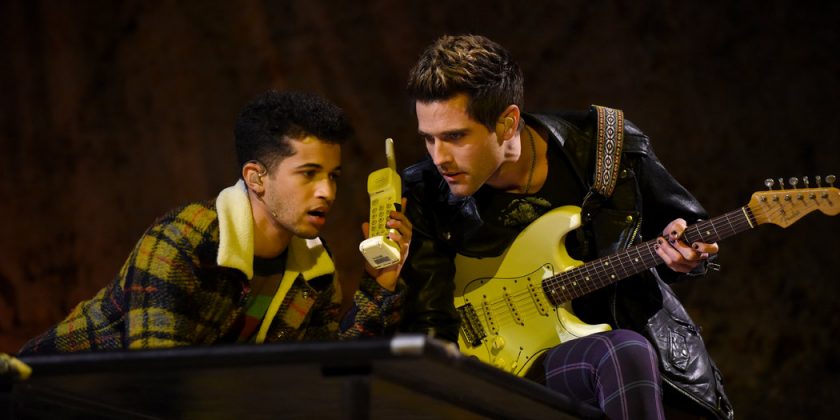 A longstanding superstition holds that saying the title of William Shakespeare’s “Macbeth” while inside a theater — unless you are rehearsing or performing the play itself — will bring about a terrible curse.

The notion is based on an unfounded legend, but it makes you wonder what people were saying in the studio where “Rent: Live” was rehearsing the past few weeks. On Sunday, not long before the 8 p.m. curtain for the musical’s live broadcast on Fox, the network announced that Brennin Hunt, the actor playing Roger, seriously injured his foot while performing during the previous day’s dress rehearsal. Unlike on Broadway (and in most professional theater productions), the show did not have understudies for its leads.

The solution? Much of what viewers would see would be Saturday’s recorded performance, the cast noted in a statement during an early commercial break. The final 15 minutes or so were live; Hunt was at a table, his foot in a cast and propped on a chair. (Hashtags like #RentNotLive and #RentKindaLive trended during the broadcast.) 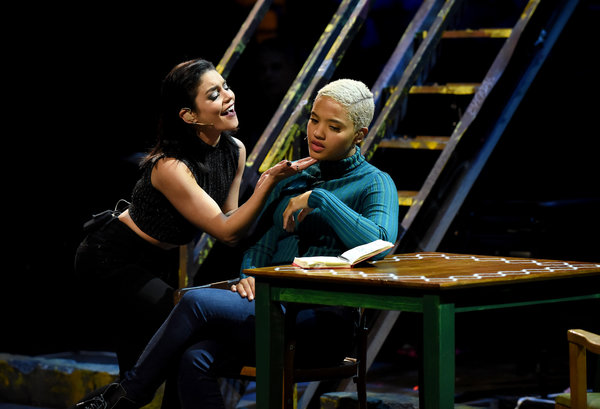 It feels a bit weird to critique what was almost entirely a recorded dress rehearsal. How do you measure three hours of chaotic visuals and middling audio most of us were never meant to see and hear? Mostly in disappointment, I guess, though this is what Fox gave us.

“Rent,” Jonathan Larson’s musical about a ragtag bunch of young squatters who self-righteously equate their refusal to pay their landlord to sticking it to The Man, debuted at New York Theater Workshop in 1996 and went on to become a Broadway juggernaut. But it’s a curious choice for a major network production.

It’s not family friendly in the way that “The Sound of Music” or “The Wiz” are, or “Grease” sort of is. It’s a show so of its time (garage rock filtered through a Broadway sensibility!) that it can be easy to play down the impact it had as a daring, wildly progressive musical prominently featuring characters of color, queer romance and people living with (and dying from) AIDS, at a time when the disease and its victims were rarely front and center in pop culture.

[See photos from the original production of “Rent.”]

Few moments from “Rent: Live” evoked what made the show so special. The sound mixing was rough — characters’ voices were sometimes too soft, too loud or just too muddled to comprehend. It didn’t help that the overzealous crowd, perhaps primed from years of “American Idol” and the like, chimed in to “woo” and cheer whenever an actor belted a long note — which, if you aren’t familiar with “Rent,” occurs a lot. In the case of “Today 4 U,” a musical showcase for the larger-than-life optimist Angel (Valentina, a star of “RuPaul’s Drag Race”), the audience was so hyped it drowned out much of her vocals.

Also too muddled to comprehend: the frantic, overwrought camerawork. “Rent: Live” was directed by Michael Greif, who oversaw the original Broadway production, and Alex Rudzinski, but they both seemed to be channeling Baz Luhrmann. The cameras swooped around the sprawling stage erratically, without any ostensible purpose other than to distinguish this from feeling like a theater production. During “Will I?,” a simple melody sung by the chorus in a round, the focus shifted dizzily from one character to another, effectively dulling the moment’s emotional resonance.

As with network TV’s other recent live musicals, the cast was a mix of stage and screen performers, along with a couple of pop stars. The results were all over the place: The R&B singers Tinashe and Mario, playing Mimi and Benny, did fine, but they weren’t standouts. Jordan Fisher’s Mark was lithe and fun to watch while dancing, particularly during “La Vie Boheme.”

The highlights included Vanessa Hudgens as the flighty performance artist and activist Maureen and Kiersey Clemons as her uptight lawyer girlfriend, Joanne, performing “Take Me or Leave Me.” It’s a fun duet brimming with flirtations and frustrations, a favorite song of countless high school theater nerds (like me) and karaoke enthusiasts — and Hudgens and Clemons nailed it in the dress rehearsal, convincingly playing the feverish couple at a crossroads while hitting those notes.

As Collins, the Broadway actor Brandon Victor Dixon (who played Judas in last spring’s live TV broadcast of “Jesus Christ Superstar”) also gave a towering performance during the number “I’ll Cover You (Reprise).” He brought soul and the pangs of grief and loss into every lyric, and when the chorus joined in, it was haunting.

Around 10:45 p.m., the would-be live show finally became live. Unfortunately, the last few songs of “Rent” are some of the musical’s most unremarkable, as the story hurtles awkwardly toward its jarring ending.

Yet in those moments, as the characters comforted one another during the final song and cast members from the original Broadway production, including Idina Menzel, Taye Diggs and Anthony Rapp, appeared onstage for “Seasons of Love,” I regretted that these hard-working performers didn’t get to put on the show that they had signed up for (even if the fully live “Rent” probably would have suffered from the same maddening camera whiplash and bad sound).

Yes, it was disappointing. But clearly there was love in this production, too.

Rent: Live
A mostly recorded version of the show was broadcast on Sunday night on Fox.