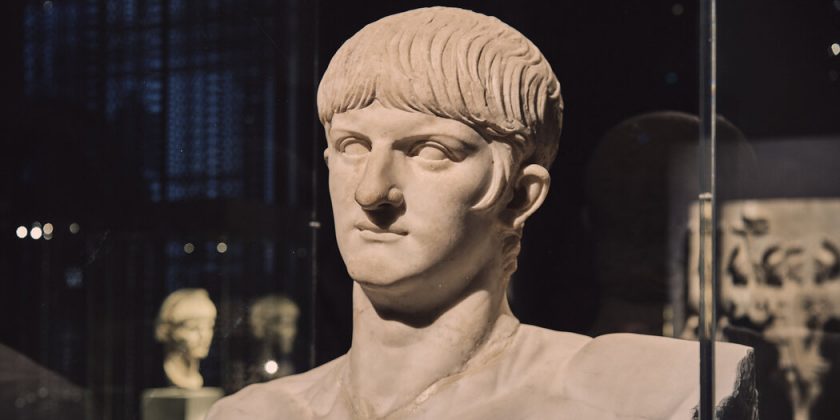 LONDON — The mangled window grille isn’t everybody’s idea of a museum piece. It’s a rusty piece of iron, bent out of shape. Yet for the next five months, it has a vitrine of its own at the British Museum.

The grille is a relic of the Great Fire of Rome in A.D. 64 and a centerpiece of the museum’s sprawling new show “Nero: The Man Behind the Myth,” about the first-century Roman emperor who, for some 2,000 years, has been blamed for starting the inferno and playing music while it spread. What the exhibition aims to demonstrate is that Nero got a bad rap.

“Nero is famed as the Emperor who fiddled while Rome burned, a tyrant who was cruel and ruthless towards his family and a somewhat pathetic megalomaniac prone to excess,” the British Museum director, Hartwig Fischer, wrote in the exhibition’s catalog. 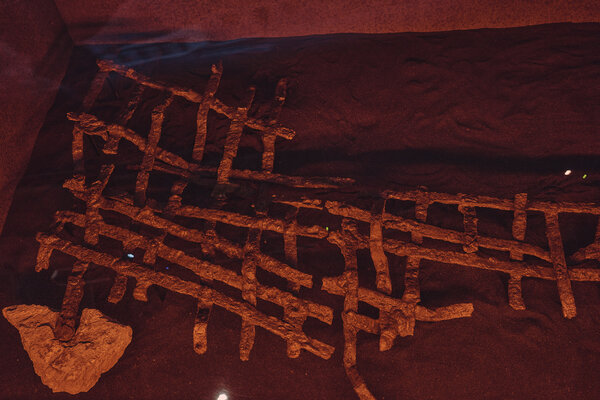 Yet through sculptures and architectural fragments, coins and jewels, frescoes and writing tablets, the British Museum offers an alternative narrative of a young man who became emperor when he was not yet 17 and was driven to suicide by his adversaries at 30.

The charge sheet against Nero is long and familiar. He is accused of having an incestuous relationship with his mother; of killing her, as well as his first two wives; and of being “generally evil: a glutton and profligate who burned down Rome just to build himself a grand palace,” Thorsten Opper, the exhibition’s curator, said.

Those charges are “based on manipulations and lies that are 2,000 years old and very powerful,” Opper added. The negative spin campaign began while Nero was still alive, when members of the Roman elite felt threatened by the emperor’s social reforms and his promotion of the lower classes, he said, and it continued long after his death. In reality, Opper said, Nero was “trying very hard, and he was dealt an extremely bad hand.”

The British Museum is not the first institution to revisit the Nero narrative. In 2016, a show at the Rhineland State Museum in Trier, Germany, portrayed him not as the prototypical tyrant but as a lover of the arts who neglected politics and paid dearly for it. In 2011, Rome’s Parco Archeologico del Colosseo, which oversees the Colosseum as well as Nero’s palace, the Domus Aurea, staged an exhibition reassessing the figure of Nero and his image as a bloodthirsty pyromaniac.

The London show opens with an example of anti-Nero propaganda: a marble head that is among the most widely reproduced representations of the emperor. The top half is an original Roman sculpture of Nero, with his trademark bangs. It was resculpted into the likeness of another Roman emperor (as was often done with Nero statues) and finally turned back into a portrait of Nero in the 17th century — this time with a beard, a double chin and a mouth turned down in a sneer.

Yet that image of Nero prevailed in the collective imagination. On the wall behind is what the catalog terms “the most iconic evocation of Nero in the modern era”: a scene from the 1951 movie “Quo Vadis” in which a bearded Peter Ustinov, starring as the madman Nero, plays his lyre while Rome combusts.

The exhibition revisits the legend through objects and documents from all over the Roman Empire. It becomes clear that the blaze was almost certainly an accident and that Nero was not even in Rome when it started.

After the blaze, Nero fed and sheltered the homeless and rebuilt the city. A gold coin from a year or two later (in the catalog but not the exhibition) shows Nero on one side and, on the other, the new Temple of Vesta, one of the first monuments he rebuilt.

Nero also had to “find culprits” for the fire, so he went after a “Jewish subgroup,” later known as Christians, Mr. Opper explained. Nero became “the anti-Christ” to followers of what would become the West’s dominant faith, Christianity.

In the meantime, he developed entertainments such as chariot racing, gladiator fights and stage performances. (Nero himself was a chariot racer and musician.) Under Nero, the Circus Maximus, a huge stadium in Rome, could fit as many as 150,000 spectators. The emperor had his own gladiatorial school and chose a famous gladiator as the commander of his bodyguards.

Mary Beard, a professor of classics at the University of Cambridge and a British Museum board member, said Nero had been much maligned for indulging in so much revelry and excess — but so had emperors who came before and after, such as Caligula and Domitian.

“The figures of these individual emperors are very puzzling,” she said. “They’re being mediated to us by a very strong political agenda that comes after them.”

“One of the things that the material culture shows you is that the Roman Empire goes on in much the same form, with ups and downs, no matter who’s on the throne,” she added.

Among the most beautiful sections of the show is the one dedicated to the palace that Nero built to house his court, Rome’s government and a service staff of thousands: the Domus Aurea, or Golden House. It probably got its name during his reign in reference to its gilded interiors or architectural decorations that glistened in the sunlight. The show includes fragments of a gilded stucco panel and a bronze-and-gemstone column decoration of the kind that gave the palace notoriety as a hub of extravagance.

Only one section of the Domus Aurea survives: the rooms used for banquets and celebrations. The rest was wiped out by Nero’s successors.

The Domus Aurea is set to reopen to the public in the second half of June with a new entrance designed by the architect Stefano Boeri. The site, next to the Colosseum, was first made accessible to visitors in 1999 but closed in late 2005 after heavy rain made restoration work necessary. It reopened in 2014 and was a popular tourist site until the coronavirus outbreak.

Alfonsina Russo, the director of the Parco Archeologico del Colosseo, said that while the Domus Aurea originally would have covered a vast area of Rome, it was no grander than the palaces of other emperors.

Nero was “a victim of his time: the last emperor of his dynasty, with many enemies, and one who suffered a sad fate,” she said.

Under attack by a faction in the Roman Senate and abandoned by his own Praetorian Guard, Nero committed suicide in a tiny villa outside Rome.

Russo noted that all sources on Nero were “negative sources” and that it was important to “recontextualize everything and compare Nero to other emperors who, despite having committed crimes, did not meet the same fate.”

Might history be fairer to Nero in the future? “I think so,” Ms. Russo replied. “That’s what academics should aim for.”