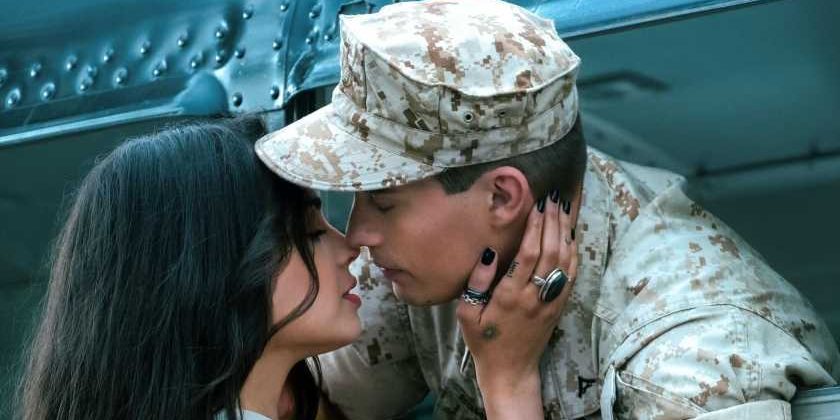 Purple Hearts is the new Netflix film that has broken streaming records but many viewers are criticising the film for its racism and “military propaganda”.

It’s hard to predict what’s trending on Netflix. From new limited series to films and documentaries, the streaming platform is jampacked full of content and it can be hard to keep on top of everything. That’s where the handy ‘top 10’ list on Netflix comes in. Currently at the top of that list is a new romantic film that has quickly taken everyone by storm.

Purple Hearts is currently the number one film on Netflix.

While Purple Hearts may be a popular hit with viewers, however, elsewhere the reception to the film has been lukewarm at best.

The film follows Cassie (Sofia Carson), a struggling singer-songwriter, and Luke (Nicholas Galitzine), a troubled marine. In spite of their differences, they agree to marry solely for the military benefits. When tragedy strikes, the line between real and pretend begins to blur. It’s a marriage of convenience that quickly turns into a very real love story, but it’s the film’s handling of military and racial themes that many viewers have a problem with.

The military love story trope is an age-old one. We’ve had Atonement, Pearl Harbour and Dear John, to name a few, and Purple Hearts fits into the canon of “he goes off to war and leaves her behind” films that many people enjoy. However, the genre itself is more recently the target of criticism, contrasted with the real-world warfare and combat that many countries worldwide are having to face every day.

Purple Hearts has not only been called out for its “military propaganda” on Twitter and TikTok but one line, in particular, has garnered a lot of backlash. In the film, one of the characters makes a toast to “hunting down some goddamn Arabs baby”. When Cassie criticises the marine for his choice of words, she’s ridiculed for being sensitive and is subsequently made to feel embarrassed for raising it. Also, there’s an underlying element of sexism when the men around her dismiss her viewpoint, with Luke telling her to sit down after being told to “get your girl” by his friend.

Another scene that has made viewers uncomfortable is when one of Luke’s military friends says to Cassie: “So we’re good enough to fight for your ass, but not good enough to touch it?”

Sofia Carson and Nicholas Galitzine star as Cassie and Luke.

As well as the misogyny of some of the characters, the film has also been criticised for being marketed as one genre but really being another.

TikTok users have rounded up some of the most problematic scenes in the film.

The film may feed into our love of the ‘enemies to lovers’ trope but many viewers are asking at what cost?

Some people have even described it as a horror.

But also, more than anything, it’s an accurate depiction of the American healthcare system and the lengths some people are forced to go to.

Sometimes, all you can do is laugh.

But also, the racism in the film – although an intentional inclusion – has left a sour taste in a lot of people’s mouths.

Purple Hearts is available to stream on Netflix.