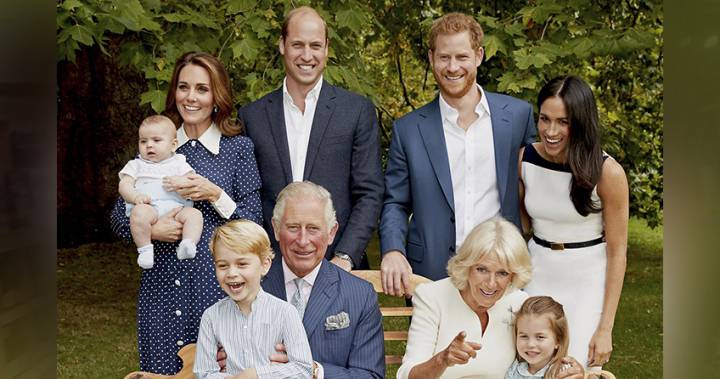 Prince Charles is turning 70 with a family birthday party, and the prince’s Clarence House office released two family portraits to mark the birthday.

Kate and Prince William’s son, Prince George, is sitting on his grandfather’s knee in the photos.

In a new documentary titled Prince, Son and Heir: Charles at 70, which aired on BBC One last week, celebrating Charles’ 70th birthday, William says his father is “brilliant” with his children Prince George, Princess Charlotte, and Prince Louis.

He also shared that the kids call him “Grandpa Wales.”

“It’s something I’m working more heavily on, put it that way,” William said in the documentary. “I think he does have time for it, but I would like him to have more time with the children.”

Prince Harry said he’s such a workaholic, he eats dinner too late at night and falls asleep at his desk with his notes stuck to his face.

“Two new photographs of The Prince of Wales and his family have been released to celebrate HRH’s 70th birthday. The photos were taken by Chris Jackson in the garden of Clarence House,” the first tweet read.

The next tweet featured a slideshow of photos of Prince Charles.

“Happy 70th birthday to HRH The Prince of Wales,” the tweet read.

Clarence House sent out another tweet with the latest issue of Country Life, edited by Prince Charles.

“Released today, this week’s issue of Country Life has been guest edited by The Prince of Wales to celebrate his 70th birthday. The magazine includes contributions from The Duchess of Cornwall and The Duke of Cambridge,” the tweet read.

Charles, who has a firm commitment to his environmentalist views, is due to have tea on Wednesday with a group of people who are also turning 70 this year, before a Buckingham Palace party thrown by his mother, Queen Elizabeth.

The prince writes in the latest edition of Country Life magazine, urging people not to take the natural world for granted but to “think ahead to what our grandchildren will want and need.”

—With files from the Associated Press