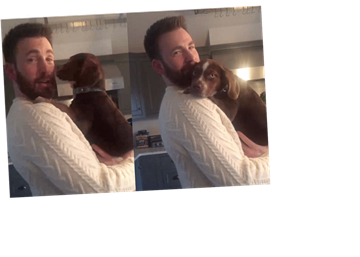 After trending for decidedly non-wholesome reasons earlier this year, Chris Evans is once again causing all sorts of conversation on social media.

But this time it’s over a very-safe-for-work video of the “Marvel” star cuddling up to an adorable puppy while wearing a chunky knit sweater.

And, yes, said chunky knit sweater just so happens to exactly resemble the same garment he famously wore in “Knives Out,” which spurred many a cream-colored iteration to sell out in stores across the country.

“Gentle, be gentle,” Evans cautioned in the Twitter video. “You got a new buddy?”

She then shared a clip of Evans lovingly holding and kissing her dog that’s since racked up over 500,000, adding in the caption, “Best buds.”

Evans also shared some videos of the outing from his own account.

“Dodger had a very energetic play date,” he wrote alongside a video of the canines roughhousing on a patio while Raisman watched.

“Too bad his charm didn’t work on me,” he jokingly wrote alongside a different video, which showed him cozying up with Mylo.

While their puppy hangout very well might be platonic, that didn’t stop people on social media from suspecting that Evans and Raisman might be giving each other puppy eyes.

Evans has been publicly single since his March 2018 breakup with Jenny Slate, despite rumors swirling about a possible romance with British actor Lily James earlier this year.

The two were spotted out and about together in London on multiple occasions over the summer, but both have refused to confirm or deny the potential relationship.

But should Evans and Raisman take their friendship to the next level, it’s only a matter of time before they’re all outfitted in coordinating knitwear, considering Evans’ dog already own his own set.