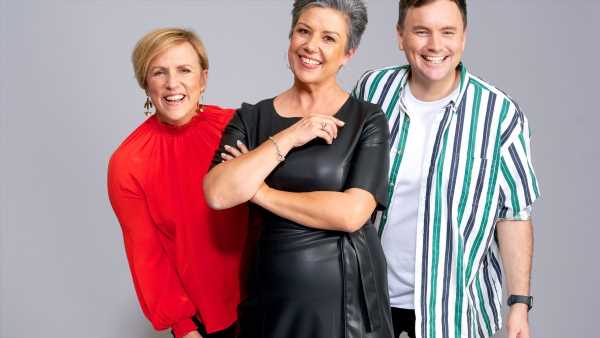 Hilary Barry and comedian extraordinaire Tom Sainsbury are going head to head in a new reboot of popular charades game show Give Us a Clue.

While Barry and Sainsbury will captain opposing teams they will be at the mercy of Paula Bennett, who will put the celebrity players through their paces as host and resident queen of clues.

Give Us a Clue sees women versus men in a battle of charades as New Zealand’s favourite celebrities attempt to mime out the titles for movies, TV shows, songs, books, plays and quotations, all before the clock runs out.

“This show is going to be fast-paced chaotic fun that I am somehow going to try and control,” says Paula Bennett. “I envisage the biggest challenge for Tom and Hilary will be not being allowed to talk!”

Hilary Barry adds: “It was watching the British version of Give Us a Clue when I was a child that really inspired my love of charades and also my love of Sir Michael Parkinson. So, when I was asked to be involved in a local version I jumped at the chance. I love that we’re sticking with the original format having the men pitted against the women. Tom Sainsbury should be prepared for a tough battle and some formidable opponents!”

Two teams of four celebrities will go head-to-head in the competition, with each mime testing the acting skills and imagination of our famous faces. The inevitable charade-fail calamities will have viewers shouting at their screens and laughing out loud in equal measure as they play along at home.

“I’m so bloody excited about being part of Give Us a Glue,” enthuses Tom. “I was hoping I could sweet talk Paula into giving me and my team the upper hand, but apparently, she’s going to be annoyingly fair. Hilary has told me on multiple occasions that she’s very competitive, but she hasn’t played a game against the likes of me, so I’m predicting a high-stakes, passionate TV show.”

The celebrity contestants who will be joining Barry and Sainsbury have yet to be revealed.

Give Us a Clue will screen on TVNZ 1 this winter.