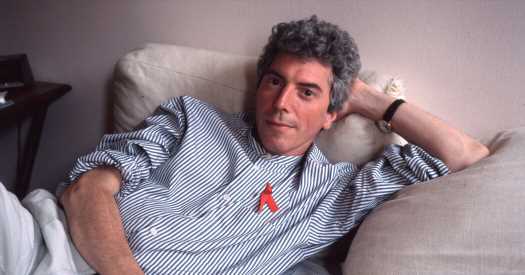 Patrick O’Connell, who as the founding director of Visual AIDS, an advocacy group that supports artists living with the disease, helped shatter the stigma surrounding AIDS in the 1990s with awareness campaigns including the ubiquitous red ribbon, died on March 23 at a hospital in Manhattan. He was 67.

In the 1980s, as New York became the epicenter of the AIDS crisis, Mr. O’Connell was among a group of gay men in the arts community living in anguish and confusion. Seemingly every month, he found himself attending another friend’s funeral. On his answering machine, he found messages of despair from those who learned they were sick. The public’s acknowledgment of AIDS was muted; the White House was silent.

“We were living in a war zone,” Mr. O’Connell said in a 2011 interview with Newsday. “But it was like a war that was some kind of deep secret only we knew about.” 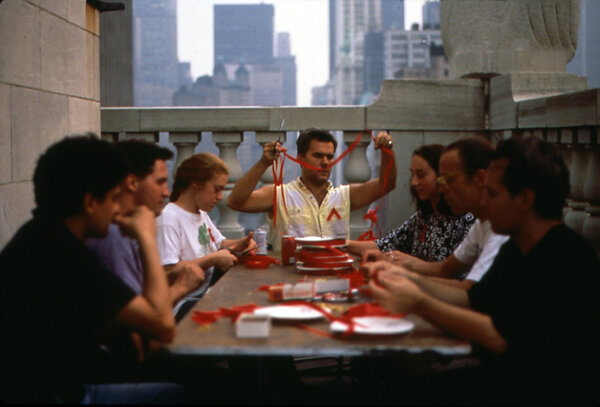 In hopes of taking action, Mr. O’Connell began meeting with others at a loft in Chelsea, which became the headquarters of Visual AIDS. Armed with a fax machine and a Macintosh computer, Mr. O’Connell began generating conceptual art-based awareness campaigns that forced the public to reckon with the disease.

In 1991, Visual AIDS began the Ribbon Project, which produced the inverted V-shaped red ribbon that would become an international symbol of AIDS advocacy.

Its color represented blood, and its sparse design nodded to the silence surrounding the disease. Mr. O’Connell helped organize “ribbon bees” in which thousands of the grosgrain ribbons were cut and folded for distribution around the city. He also set his sight on a mission: getting the red ribbon to appear on the Tony Awards telecast.

With just two weeks until the ceremony, Mr. O’Connell and his team worked the phones to call any Broadway connections they had: hairdressers, actors, costume designers. On the eve of the awards, volunteers placed red ribbons on the seats of the Minskoff Theater. That night, Mr. O’Connell watched on television with nervous anticipation.

When the curtains rose, Jeremy Irons, one of the hosts, stepped onto the stage wearing a red ribbon on his lapel. Scores of celebrities followed suit throughout the night.

Little red flecks soon started appearing on shirts in cities across the country. They appeared at the Oscars, the Emmys and the Grammys. The United States Postal Service issued a red ribbon stamp in 1993.

“If you can’t do anything big about AIDS, second best is to appear to do something,” the fashion designer Isaac Mizrahi told The New York Times in 1992. “That’s why I love the ribbon. It ruins whatever you’re wearing, it doesn’t work compositionally, it’s the wrong color, it throws your hair off, and who cares, because you have human feelings and you’re showing them.”

As the red ribbon became a phenomenon, some AIDS activists derided it as a hollow trend that had lost its significance. As far as Mr. O’Connell was concerned, the results were what mattered.

“People want to say something, not necessarily with anger and confrontation all the time,” he told The Times in 1992. “This allows them. And even if it is only an easy first step, that’s great with me. It won’t be their last.”

If the red ribbon was subtle in its symbolism, Mr. O’Connell’s other AIDS awareness campaigns didn’t shy away from the starkness of the disease.

In 1989, Visual AIDS began “Day Without Art,” in which galleries and museums shrouded their artworks to represent human loss. Hundreds of institutions participated, including the Brooklyn Museum, the J. Paul Getty Museum in Los Angeles and the Metropolitan Museum of Art, which replaced a Picasso painting with a somber informational placard. Visual AIDS has continued the initiative annually to this day.

“Night Without Light,” a sprawling event that also evoked grief, was held in conjunction with World AIDS Day for the first time the next year. New York’s skyline went dark as buildings, bridges, monuments and Broadway turned off their lights for 15 minutes. In 1993, the White House dimmed its lights, too.

“Every Ten Minutes,” a sound installation by Robert Farber, featured a recording of a church bell that tolled every 10 minutes to signal the interval between AIDS deaths in the United States. “Electric Blanket,” a photography show that featured the work of Nan Goldin, Robert Mapplethorpe and Peter Hujar, documented the AIDS crisis through portraits of people living with the disease and pictures of protests and rallies.

“All these projects, at that moment in time, something huge was at stake,” Mr. O’Connell said in “Let the Record Show,” a 2013 documentary about AIDS activism by Demetrea and Rebekah Dewald. “It was the lives of our friends and others whom we didn’t know.”

Patrick James O’Connell was born on April 12, 1953, in Manhattan. His father, Daniel, was a wire lather and iron worker. His mother, Helen (Barry) O’Connell, was a secretary.

Patrick attended Fordham Preparatory School and later worked summer jobs at construction sites with his father. He graduated from Trinity College in Hartford, Conn., in 1975 with a bachelor’s degree in history.

In his 20s, Mr. O’Connell began pursuing an art career and became the director of Hallwalls Contemporary Arts Center in Buffalo. He returned to the city after about a year to work for Artists Space, an alternative downtown gallery, where he dealt with artists like Cindy Sherman, Sherrie Levine and Robert Longo.

In the late 1970s, in a harsher city, Mr. O’Connell was attacked in a hate crime. He was walking home from a bar in the East Village when a group of teenagers ambushed him and broke his arm. He required skin grafts and would bear a foot-long scar for the rest of his life.

In the mid-1980s, Mr. O’Connell learned that he had contracted AIDS. He began taking a cocktail of over 30 pills a day. After many years of struggling with alcoholism, he checked into rehab.

“I am almost stripped and bereft of contemporaries who remember me as young and cute and vibrant,” he said in an interview with POZ, a magazine about H.I.V. and AIDS, in 1994. “Part of our definition is the reflection we get from our friends. It’s painful that that is all gone.”

Mr. O’Connell went on to embrace sobriety, and around 1989 he became involved with Visual AIDS. In 1995, as his health worsened, he left the organization.

His longtime partner, James Morrow, died of cancer in 2000.

Mr. O’Connell existed quietly in New York over the last decade. He lived sparsely off his disability assistance in a rent-regulated apartment in Washington Heights. With each year that passed, he felt his world get slightly smaller.

“Patrick’s mission in life was rooted in a moment of crisis, but that sense of urgency eventually ended,” said Peter Hay Halpert, a close friend. “So many people involved in that fight alongside him died, and he was left to deal with living with the illness alone. He became one of the last survivors from that time still left.

“It was this moment where everyone united to face a crisis,” Mr. Halpert added, “but then Patrick still had to keep living with AIDS.”

Nevertheless, Mr. O’Connell’s call to activism never ended. He rarely wore a shirt that didn’t have a red ribbon pinned to it.