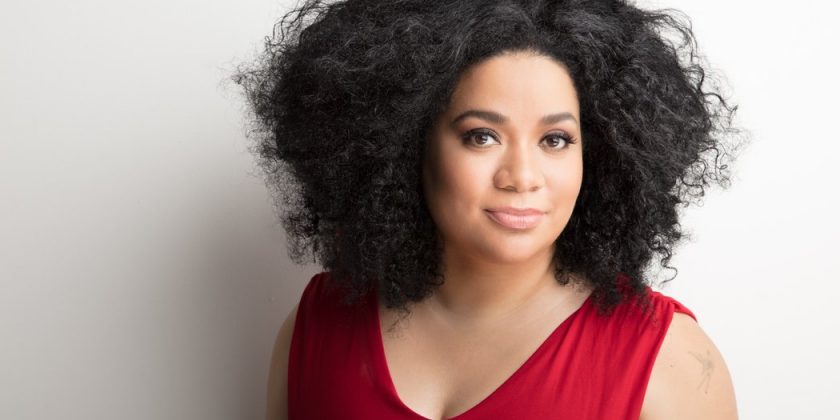 It poured in New York on Election Day, and the “I VOTED” sticker on Patricia Ione Lloyd’s coat that afternoon looked bedraggled. But her glittery eye shadow was perfection, utterly in keeping with the image of a woman whose Instagram posts include a photo of herself (taken just for fun) as a mermaid, in beaded bustier and glistening tail.

Ms. Lloyd is a big fan of glamour. She’s also political, and the characters in “Eve’s Song” — her professional playwriting debut, running through Dec. 9 at the Public Theater — are acutely aware of the images they project. She wrote the first draft in 2015 in the Public’s Emerging Writers Group, a program she’d tried for five years to get into, and which she credits with making possible the television writing she has done since.

With a black family at its center and the Ellis Wilson painting “Funeral Procession” on their wall, the play — an urgent, darkly comic reminder that black women’s lives matter, too — reads partly as a deconstruction of “The Cosby Show.” It would be reasonable to guess that its author grew up well-off.

But the story Ms. Lloyd tells of her Iowa childhood is about living under the poverty line. She goes by Ione now, but she was Patti then — a girl whose mother took her to yard sales to buy loads of books for very little, and whose father made up tales with her about what the birds outside were saying.

It was a long road from that life to the one she lives now, in Clinton Hill, Brooklyn, with her partner, Samantha Ifill, a dentist. “Eve’s Song” came from Ms. Lloyd’s realization that joining a more privileged class didn’t guarantee safety from the dangers of being female, black and queer.

Upstairs at the Public, Ms. Lloyd — who is bubbly and funny, with a voice like Mindy Kaling’s — took out her smartphone, opened up Instagram and chatted about her feed. These are edited excerpts. 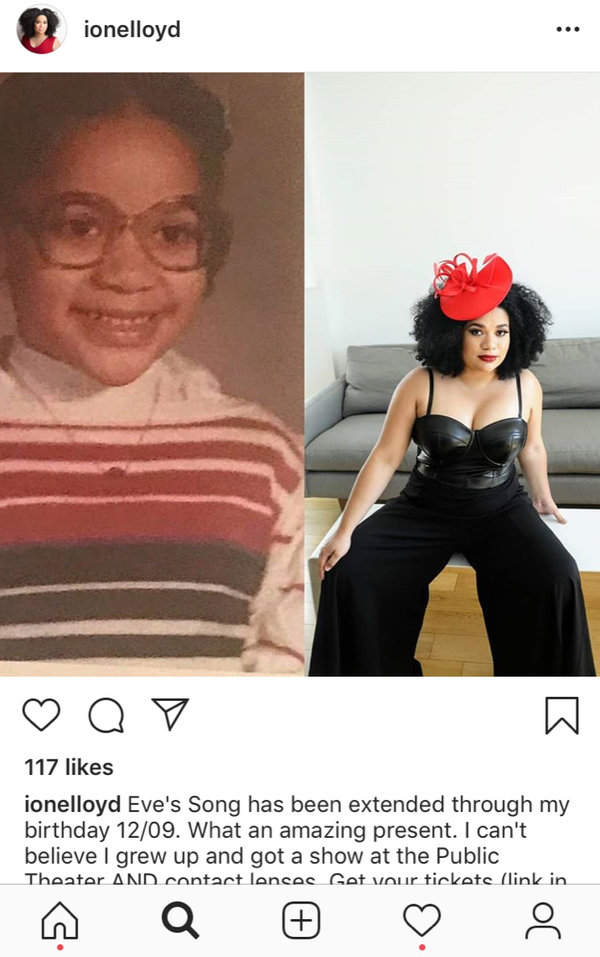 “The first thing I think of is welfare glasses. My family always worked, but like a lot of Americans on welfare just didn’t have enough. I don’t remember what was in style — I think I was about 7 — but I just remember they covered my whole face, and I felt so awkward. Now I love vintage things, or things that look like vintage, like that hat. I have really big hair, and I was like, ‘It just perches there! It’s wonderful.’”

“The stories that people tell themselves about black women or black queer women or poor women, those are myths, but people still hold onto them. I’m really trying to tell myself different stories about myself that can help me move through the world in a more powerful way. I will tell you, it’s very hard to find an authentic-looking mermaid tail. But you just have to like fall into the tub — you go, ‘Shoop!’ and hope everything’s O.K.”

“Little Miss Flint, Mari Copeny, is a hero of mine. She’s with the ‘Fearless Girl’ in Wall Street. Thinking about language and casting breakdowns, when it’s a girl or a woman it’s usually not meant to be someone of color. I’m trying to find ways through my work to change that assumption. To have a young black girl next to the ‘Fearless Girl’ does that: broadens the idea of girlhood and womanhood. She’s just brave, and I’m really working on being brave.”