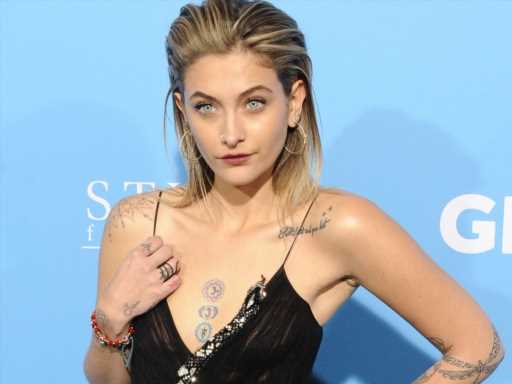 Paris Jackson reminds the world that she’s the Queen of rocker-chic, and these new polaroids prove it.

On April 12, Jackson posted a couple of polaroids to her Instagram, showing some behind-the-scenes snapshots of her shoot with Kat Von D Beauty. She posted it with the caption, “@kvdbeauty #kvdbeauty” along with tagging a plethora of people that made it happen, like the makeup artist, agency, photographer, and more.

You can see the photos HERE.

In the first photo, we see Jackson sitting on a white block, rocking a stunning ensemble. Her hair is flowing as she wears a black and brown ensemble topped with fishnets and Doc Marten boots. In the second photo, we see Jackson with a messy bun, showing off her tattoos as she sits at a table. She’s wearing thick graphic eyeliner and heavy boots.

Truly, Jackson is the pinnacle of rocker-chic, from her clothes to her stage presence. She’s been frequently seen in darker, edgy ensembles throughout the years, especially since she’s been performing live in the past few months.

Now, these snapshots came after the announcement that she would model for her first beauty campaign. The singer and songwriter helped launch Kat Von D’s new tattoo gel eyeliner. Per Jackson’s press statement, she said she was so excited about the KVD campaign because it perfectly encompasses one’s personal identity, something she holds dearly. “As an artist, I was immediately drawn to KVD Beauty for their commitment to artistry and self-expression, both of which are huge parts of my personal identity. I also appreciate how the brand brings tattoos and cosmetics together in such a beautiful way.”

Before you go, click here to see photos of Michael Jackson’s kids over the years.