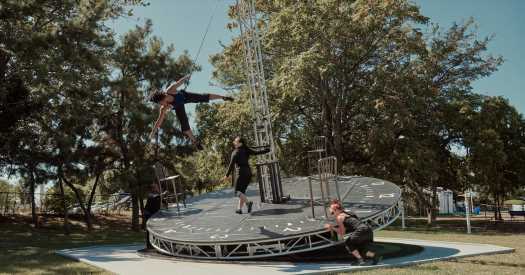 Though it sits right next to a prison, Louis Engel Waterfront Park in Ossining, N.Y., is a family-friendly place. There, on the shore of the Hudson River, are picnic tables, a playground, a splash pad — and, this weekend only, a circular platform that rotates and wobbles like a Tilt-a-Whirl. People attached to it by cables can fly.

That’s not for the playground, though. It’s equipment for an aerial dance performance. And while the subject of the work is family focused, it is also adult and painful. “The Wait Room” is about the experiences of women whose loved ones — fathers, sons, husbands — are behind prison gates and walls, like those of Sing Sing Correctional Facility, steps away from Engel Park.

Flyaway Productions, the all-female company from San Francisco presenting “The Wait Room,” commonly uses harnesses and rigging to bring attention to social issues, looking for what it calls “the intersection of social justice and acrobatic spectacle.” Like other Flyaway productions, “The Wait Room” seeks to amplify marginalized female voices by putting female bodies into flight. What makes this work distinct from others by Jo Kreiter, who founded the troupe in 1996, is its personal origins. 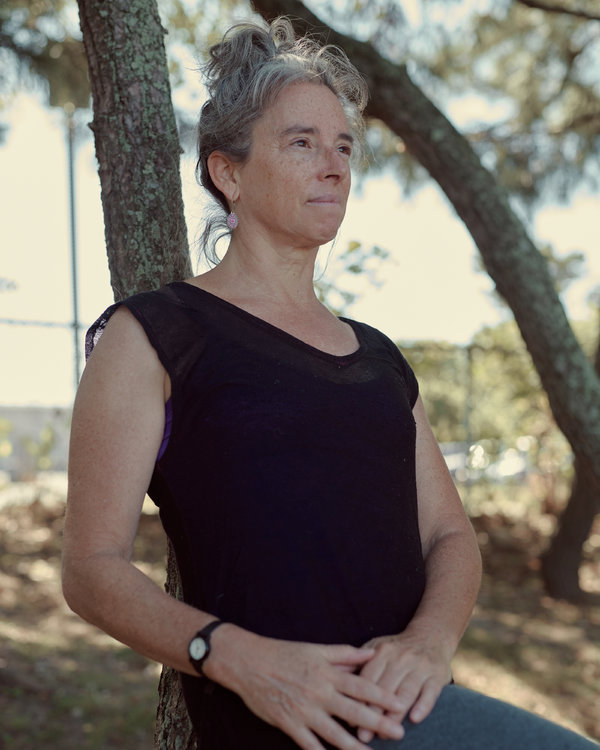 “I am a woman with an incarcerated loved one,” Ms. Kreiter said in a phone interview from San Francisco last week.

She used the present tense, though her husband, who was in jail for six years, is now out on probation. “It’s not all over,” she explained. “I consider probation part of the prison system that affects families, often in horrific ways.” And it is the entire prison system that Ms. Kreiter targets as an artist-activist.

Her work, she said, always begins with an issue, the plight of women in the garment trade, for instance. Then she finds an outdoor site (like fire escapes in the garment district) that connects with her theme. This time, the issue was clear — she was living it — but she decided that rather than being strictly site-specific, she wanted a set that was transportable so that she might address a national problem across the nation. When she met with the designer Sean Riley, the first thing they discussed was chairs.

Ms. Kreiter recalled that when she and her son first visited her husband in jail, “the chairs were fixed side by side — it was hard for us to talk to each other.” The guards also demanded that everyone sit with both feet on the ground. “I would constantly get yelled at for folding my legs up,” she said, “which is like a dancer thing.”

The chairs became a metaphor for “how prison works for nobody,” she said, for a system that traumatizes through both rigidity and instability. On the “Wait Room” set, metal chairs and scaffolding shaped like a guard tower are bolted onto that Tilt-a-Whirl surface, as unstable as a ship in a storm. The performers are subject to all kinds of forces. “The metaphors of the piece are in the engineering,” she said.

And the traumatic experiences underlying the metaphors are in the voices of women who have lived them, interview recordings that Pamela Z has mixed into a soundscore. Ms. Kreiter met these women through the Essie Justice Group, an organization takes an underrecognized effect of mass incarceration — by some statistics, one in four women in the United States has a family member in prison — and views it as an opportunity. In its two-pronged approach, women support one another in their struggles but also use their hard-won knowledge of the prison system to advocate for change.

The model has been an inspiration for Ms. Kreiter, who became a member. “It’s not an exaggeration to say that the Essie Justice Group saved my life,” she said.

Her advocacy is her art. Much of “The Wait Room” focuses on what Ms. Kreiter, borrowing a phrase from Megan Comfort’s book “Doing Time Together,” calls “ceremonies of degradation”: the waiting, the fear of saying or doing anything that might get you turned away, the strict and ever-shifting rules about things like underwire in bras or whether a child’s clothes zip and snap.

The voices also speak of shame. “That’s a really big one,” Ms. Kreiter said, “and it’s pervasive. Some people did see me as a monster, for not leaving my husband. People crossed the street to avoid me. It was very painful.”

“And that’s speaking from a white, privileged, middle-class point of view,” she added. “Everything I’ve been through is 50 times worse if you’re a person of color.”

At the same time, “The Wait Room” wants to provide hope. “How is your story a love story?” Ms. Kreiter asked each interviewee, and the work ends with their answers, as the dancer Clarissa Dyas, tethered to the set, soars above it in circles.

“That’s about the stories in slave culture of flying away,” Ms. Kreiter said. “It’s about flying over the prison walls, getting out of the system.”

Performing “The Wait Room” next to Sing Sing — but not inside it — Ms. Kreiter said, is ideal: “To be in proximity is to be deeply affected. I’m bringing the audience in proximity to the prison.”

Some audience members will already know what that’s like. Families with incarcerated loved ones can attend for free. Matinees have been scheduled to coincide with the end of prison visiting hours. The Sing Sing Prison Museum (scheduled to open in 2025) is providing buses from the prison to the show.

The museum’s interim executive director, Brent Glass, said Ms. Kreiter’s work shows “the human consequences of incarceration,” aligning it with the museum’s mission — “to challenge visitors to reimagine the criminal justice system and maybe take action to improve it,” he said.

But Ms. Kreiter also wants to spread the message more widely. As the first choreographer to receive a Robert Rauschenberg Artist as Activist fellowship, she has made a “Wait Room” dance film, now on the film festival circuit. And “The Wait Room” is only the first installment in a proposed “decarceration" trilogy. Her tag line for it: “Dismantling the prison-industrial complex one dance at a time.”

“Art affects,” Ms. Kreiter said. “It really does.” After the debut performances of “The Wait Room” in California earlier this year, a young man came up to her in tears. “He said: ‘My two brothers are in prison. I grew up with them in prison. It’s shaped my life and I’ve never heard someone speak for me.’”