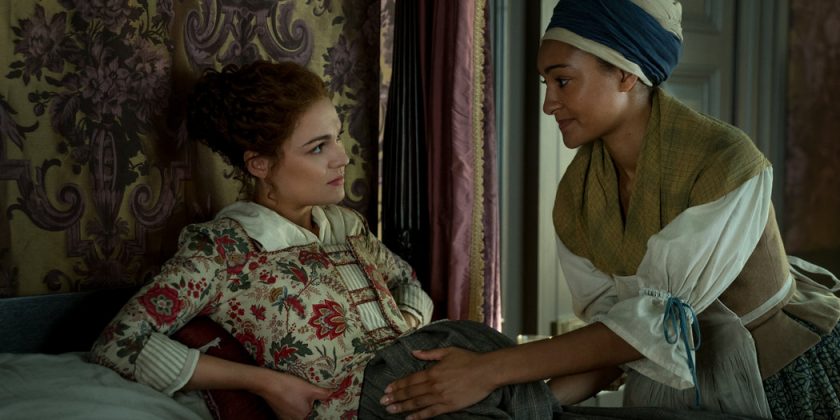 “Must you fight the same fight again? Do you not recall how it ends?”

In the season premiere of the Frasers’ American adventure, “Outlander” prompted big questions: Why bring Claire and Jamie to this place, at this moment in history? To what purpose did they cross the ocean into the tumult of colonial America?

The season has struggled to answer. For one thing, it spent more narrative energy on bringing familiar faces back into the Frasers’ circle than on giving those characters much to do. Some of those reunions were satisfying, as when Brianna joined her family through the stones. Some were convenient, as when Lord John moved in next door. And then there was Bonnet, whose ability to appear in every aspect of the Fraser story strained credulity.

All this busy work pushed some characters into the background. Take Ian — particularly noticeable this episode after he agreed to stay with the Mohawk in exchange for Roger. The show made time for a heart-wrenching goodbye, and the actors John Bell and Sam Heughan did a great job. But that moment brought into relief how scattered this season has been. And Claire’s darting in for a last-second goodbye reminded us that she was practically demoted to a supporting act for large stretches of this season.

That is even more unfortunate considering that when Claire was at the fore, it was usually during strained, and often failed, attempts to engage race issues. Slavery didn’t stop anyone from accepting hospitality at River Run — even Brianna. Jamie honored the Cherokee’s fight against land grabs, only to claim ten thousand acres. When the Cherokee were upset by that, Jamie won them over with a classic white-savior move.

Some beats — like this episode’s “Cowboys and Indians” opening vignette — suggest the show is aware of the fraught history here. But watching this episode, that’s hard to imagine.

In the Mohawk village, Claire discovers her necklace belonged to Otter Tooth, a fellow time traveler. He came back to warn the Mohawk against encroaching colonials. Many dismissed him, but some remembered his words a generation later: “You will be forgotten. The nations of the Iroquois will be no more. No one will tell your stories. Everything you are will be lost.”

There’s a lot going on in that pronouncement. As a warning about genocide, it is correct. There is also a fatalism about the disappearance of culture that touches on a discussion as old as America. (I’m not in a position to parse the issues of erasure and cultural preservation this line touches upon, but Native American nations still exist, and projects like “Reel Injun” and “American Indians in Children’s Literature” have explored the importance and impact of these stories — and of who gets to tell them.)

One thing is for sure: It’s hard to fault Otter Tooth’s point here, given how things play out.

As Claire bargains for help with rescuing Roger, she promises a small group of Mohawk to “help you preserve the memory of the man who fought for your future.” This word-salad oath heralds a rush to put this whole plot to bed. The jailbreak collapses in violence and their Mohawk ally is banished. Claire and Jamie offer no assistance.

And as soon as Roger is back, the episode drops the Mohawk entirely, returning to the plantation and the Frasers. Sure, the Frasers are the center of this story, but after learning about the crushing tragedy of Otter Tooth’s mission and after the disaster the Frasers wrought among the Mohawk, cutting back to Brianna’s labor and her inevitable reunion with Roger in the last act felt a little hollow.

“Outlander” is clear about the difficulty of changing history: After two seasons of striving, Culloden still happened. But it is equally clear that individual choices count, and that working toward a better future gives the present meaning. Several moments this season made Claire aware of the precarious position of Native Americans: the government’s bigotry, Otter Tooth’s ghost, Adawehi’s murder, settlers’ violent suspicions. This episode made her debt to history explicit and immediately forgot it — Otter Tooth’s worst fear coming true. So much for “New world, new ending.”

This season had its moments. The Fraser fallout was compelling, Lord John’s ascent to Best Beard in the Colonies was fun, and some supporting characters got moments to shine. But over all, the season was marked by scattered storytelling, rushed relationships and engaging history to no good end. Let’s hope next season finds focus, and remembers a few of those promises.

• Done well, the cyclical reappearance of characters in each other’s lives reflects something deeper: inevitability, mythology, the rhythms we understand and expect in stories. Otherwise, you get the Eagle River scene in “Hot Shots.” (Watch Roger process the news that the man who raped Brianna is the only other person he knew in the entire 18th century.)

• “How could you think such a thing?” The manhandling, Roger. The public arguing and manhandling is how.

• Duncan Lacroix and Kennedy sell the connection between Murtagh and Jocasta. That said, Jocasta has been an amoral force who isn’t bidding for our sympathy, and putting her with Murtagh is definitely a bid. I wonder if the “it’s better to fight than stand by and do naught while good people suffer” stuff changes her mind about the slave owning.

• It was also a little jarring to see Murtagh in bed with Jocasta immediately on the heels of this call to action — then again, it’s not as if watching Brianna and Phaedre make friends was any less awkward. The ethical implications of hanging out on a plantation is an issue this season just could not manage.

• I wonder about the timeline of the parallel Fraser plots. Obviously they kept back Roger’s big rescue and Ian’s farewell for the finale, but that trip was several months north and several more back. How long were Claire and Jamie trudging back without Ian or Roger while Brianna was hanging out with Lord John? Was Roger learning about Brianna’s pregnancy while she was in labor? It’s interesting to think about how a less elliptical chronology might have changed the season’s pace. Imagine several episodes of Claire and Jamie riding home alone, worried about Ian and Brianna, with Roger nowhere to be seen.