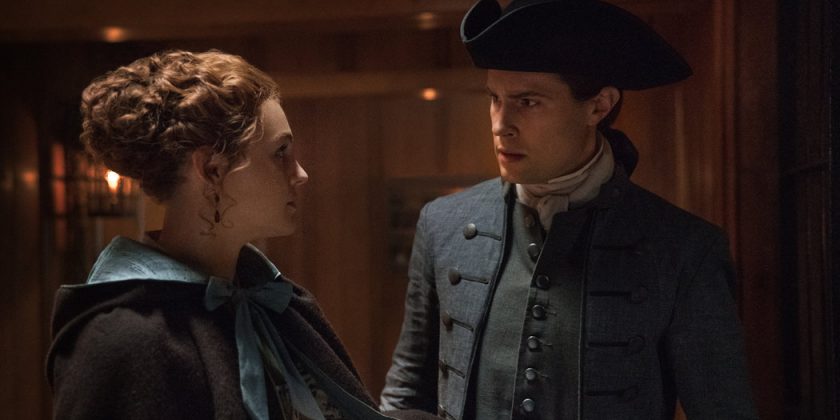 This has been an uneven season. On top of the usual demands — two time periods, two countries, two major couples, a villain, an ever-expanding supporting cast — there were the racial issues of colonial America, Brianna’s rape, and the fracturing of the Frasers. No wonder this week’s episode struggled to weave things back together as we near the season finale.

It’s so busy that we get only one glimpse of Jamie, Claire and Ian. There just isn’t time for more, given everything else. Fergus and Marsali stage a jailbreak to get Murtagh out of enemy hands. Brianna and Lord John take a road trip to confront Stephen Bonnet. And Roger has a rotten time in the Mohawk village, meets two new friends and ends up lighting one of them on fire. Busy week.

The most satisfying subplot is Brianna’s. Not the actual encounter with Bonnet — that’s a real casualty of this episode’s rush. Bonnet races from the season’s monster to tearful fatherhood, and Brianna practically pingpongs back and forth from the cell door as they battle for the last word. Sophie Skelton and Ed Speleers do their best to give weight to the rapid-fire confrontation, but given how long Brianna has suffered, there’s just not enough time for her to settle all those ghosts.

No, the most satisfying thing about Brianna’s journey is watching her navigate it with Lord John, who turns out to be a dream co-pilot. He tells her immediately that Bonnet has been caught. When she says she wants to see him, Lord John expresses concern, but he respects her wishes and offers his help. And in the jail, he honors her choice to go in alone but promises he is nearby if she needs him.

“You are impossible not to like,” Brianna marvels. That’s by design. The show is determined to make you love Lord John. He is shot in endlessly warm light and is endlessly accommodating. Even his sharp edges are getting smoothed over. (He has been a champion of British order against the regulators, but he happily covers for Murtagh.)

And he’s quickly building a rapport with Brianna. It might not be passionate, but it is respectful, which is a nice counterpoint to how other men in her life have treated her.

Even Jamie’s loving letter warns her how important it is that she forgive Bonnet and try not to take revenge. That may be well-intentioned, but it is also a little rich coming from a man currently on a road trip to rescue the guy he nearly killed for revenge. And speaking of that guy, Roger resents his life so much right now that it’s weird she can’t feel it 600 miles south.

This episode seems to delight in comparing Brianna’s two marriage options, as the camera cuts from the considerate, informative, respectful Lord John to Roger, getting more grizzled by the minute as he mutters about his heartbreak: “I’ve learned something from my pain … look out for No. 1. Well, from now on, that’s me.” He’s so cynical that he manages to alienate a priest (Yan Tual) who had been in solitary confinement.

It’s hard to fault Roger for being bitter as he sits in prison impossibly far from home. And yet he has been driven to this despair not by any awareness of his own faults, but by the machinations of a subplot that has encapsulated a lot of this season’s problems with race.

The Mohawk were cruel slavedrivers as they brought Roger north, and now they’re cruel villagers — beating Roger, imprisoning the priest and quickly resorting to murder by torture. (There is also the implication that the torture order comes from the jealous suitor (Braeden Clarke) of a Mohawk woman in love with the white priest, which does not help.) And Roger, who veered back and forth frequently from protagonist to antihero this season, gets to play hero at the expense of the Mohawk.

As the Mohawk slowly roast the tragic and handsome priest, Roger barrels through the village, tossing accelerant onto the pyre to end it faster. A tearful Johiehon (Sera-Lys McArthur) sets aside her baby and races into the flames, as Roger and the Mohawk villagers stand aghast at the spectacle. And all the while, “Adagio for Strings” plays — a musical shortcut to suggest tragedy, scoring a scene that doesn’t have the groundwork to be tragic on its own. And though Roger’s time with the Mohawk isn’t quite over, it’s hard to imagine this subplot will develop much nuance from here.

With one episode left in the season, there are plenty of loose ends to tie up. Circumstances increasingly point to dramatic reunions, rather than engaging with the wider historical issues of this season’s narrative. It will be telling to see what things “Outlander” wraps next episode, and what it leaves out in the cold.

• The Mohawk story is deeply disappointing, but it’s good to hear Mohawk spoken in the village scenes, and Sera-Lys McArthur is memorable with very little as Johiehon.

• You know John’s a keeper when he asks permission before touching a pregnant woman.

• The lingering question of this episode is whether Bonnet’s speedy contrition is enough that we don’t mind if he survived that explosion. Guess we’ll find out.