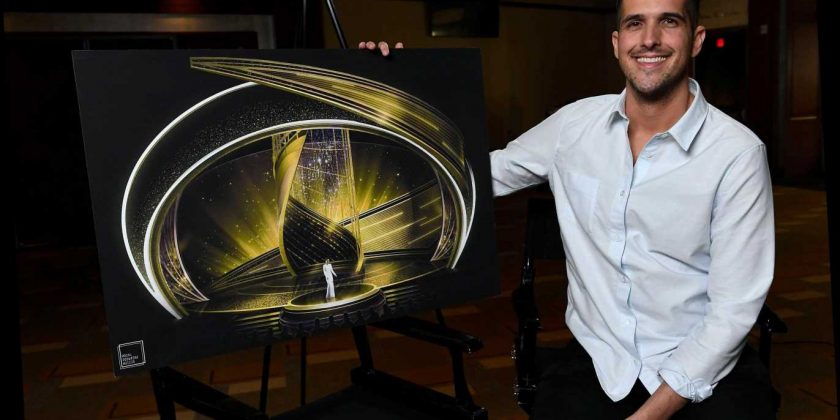 Jason Sherwood set a Hollywood precedent in February when he became the youngest person chosen to design the set for the Academy Awards in its 92-year history. Now that work has him in the running for an Emmy.

As the entertainment industry continues to grapple with the COVID-19 pandemic, the 30-year-old has come to view that Oscars experience as more than just a high-caliber professional endeavor.

“The spirit of collaboration was very much alive on that show,” Sherwood told HuffPost in an interview. “Given the current moment, it’s become a beautiful token, a reminder of a time when we were able to gather, to form small communities and create work together as a team.”

Watch Sherwood talk about his Oscars design in the video above.

This year’s Oscars, held Feb. 9 at the Dolby Theatre in Los Angeles, will perhaps best be remembered as a small but critical step forward for diverse representation on the big screen. The night’s most subversive winner was “Parasite,” a non-English-language South Korean thriller that received four awards, including best picture. Witnessing that film’s surprise ascent to critical and commercial darling made Sherwood want to “break the mold of what was normally done on the show.” 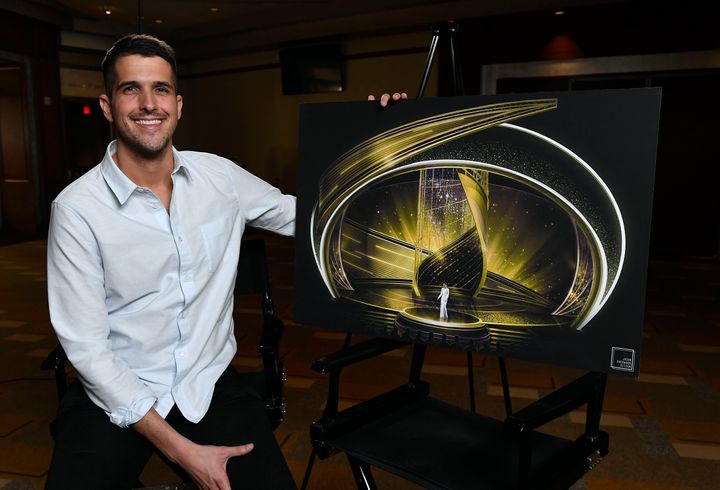 In the end, he presented producers Stephanie Allain and Lynette Howell Taylor with four concepts, eventually settling on that of a “swirling, sculptural cyclone” meant to evoke a changing Hollywood. Once installed, the fully executed design incorporated more than 40,000 Swarovski crystals, wowing director Glenn Weiss and art critics alike.

And it also nabbed Sherwood, whose résumé includes sets for the Grammy Awards and concert tours by Sara Bareilles, Sam Smith and the Spice Girls, his second Emmy nomination for production design. He won in the same category last year for Fox’s “Rent: Live.”

“To be invited back into the TV space, to design the Oscars, was a giant honor in and of itself,” he said. “The folks who came before me were certainly further along in their careers and had a lot more esteem than I do. [So] the nomination is just a wonderful affirmation of how hard we worked, how much we put into it.” 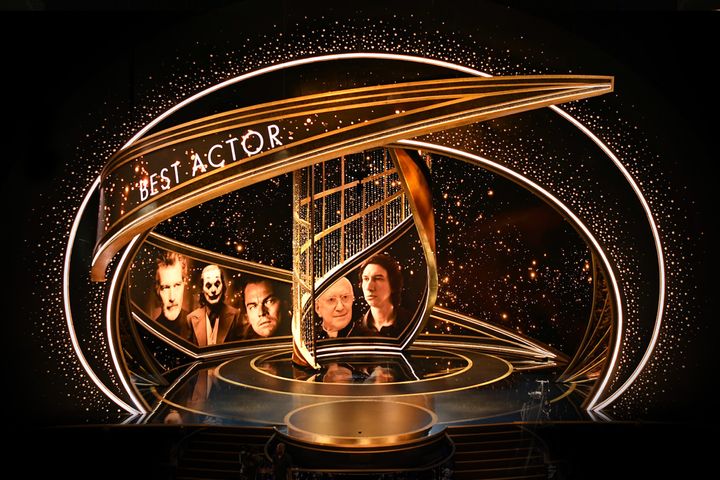 And Sherwood, who is gay, found the 2020 Oscars’ lineup of LGBTQ talent particularly inspiring, too. The evening kicked off with an elaborate musical sequence featuring Janelle Monáe and Billy Porter. Later, Elton John performed “(I’m Gonna) Love Me Again” from his musical biopic “Rocketman,” which went on to win for original song.

“We wanted to make a show that would feel incredibly inclusive and be celebrated by top artists,” he said. “So to do work at that level with artists who are unapologetically queer was one of the greatest gifts of the whole thing. I literally got to make the platform, in some sense.”

Sherwood, who grew up in suburban New Jersey, found solace in the performing arts. Though he became active in local productions as a teen, he knew early on that a career in the spotlight wasn’t for him, and he credits a high school drama teacher, Laura Rokoszak, with encouraging him to pursue design.

After graduating from New York University, Sherwood spent the next few years establishing himself in Manhattan theater circles. In 2017, he designed the set for “The View UpStairs,” a musical based on the 1973 arson that devastated a New Orleans gay bar. Last year’s New York City Center production of “Evita” was another highlight.

Both “Rent: Live” and the Academy Awards, of course, have boosted Sherwood’s profile considerably, and whether or not he takes home his second Emmy on Sept. 20, his career remains on an upswing. On Friday, it was announced he’d signed a new deal with the Creative Artists Agency.

These days, he’s unable to work on his designs in a formal sense due to COVID-19. Still, he finds inspiration in the “reckoning” against racial inequality now dominating the national conversation and believes it will lead to a series of major changes in the entertainment industry, too.

“I’ve found it to be an incredible truthful time,” he said. “There’s a huge reckoning with white supremacy, with inequality and racism, with how we’ve treated ― and are going to treat ― our BIPOC artists, friends and family [and] how we are going to create a space for those people to sit at with everyone else who’s had opportunity for centuries.”

Looking ahead, Sherwood vows only to pursue work that presents “new challenges and experiences,” noting, “I’ve never been the kind of person who says, ‘I want to have this or that job by this age.’”

But if forced to choose, he’d love a chance at designing the stage for the opening ceremonies of the Olympics one day.

“In my world, that would be a dream job,” he said. “It’s so many things I love: It’s music, spectacle and performance, and it speaks to international history.”

A post shared by Jason Sherwood Design (@jasonsherwooddesign) on Jul 1, 2018 at 5:39pm PDT