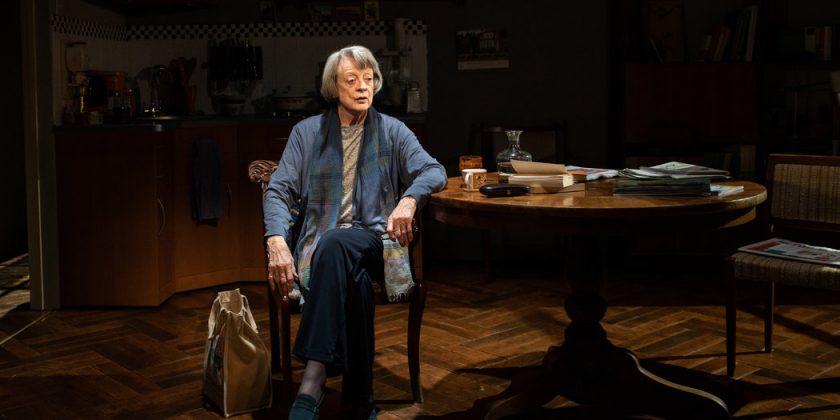 LONDON — Few acting legends in their 80s would make a stage comeback with a one-person play lasting 100 minutes without a break. Oh, and dealing with no less momentous a topic than the banality of evil.

But it’s fair to say that history is being made just now at the Bridge Theater here. Maggie Smith, the 84-year-old star seen lately as the Dowager Countess on “Downton Abbey,” is revisiting the medium in which she began. And her performance as the Nazi propaganda minister Joseph Goebbels’s largely uncomprehending secretary in “A German Life” represents a new high in a six-decade career with no shortage of peaks.

Christopher Hampton’s play, at once bleak and exhilarating, is running through May 11. Tickets are tight, made more so by the (understandable) absence of matinees, given the demands on its lone performer.

You can imagine Ms. Smith at this stage in her career choosing to be part of a Wilde or Coward comedy, in which she wouldn’t have to carry the play. But here, the role of Brunhilde Pomsel draws upon every aspect of her seemingly limitless art. The audience knows it is witnessing something special: Not in a long while have I encountered a crowd so attentive that it seemed hardly to draw breath. A rogue cellphone — hell, even a cough — would be unthinkable.

Ms. Smith is one of a handful of great British actresses of her generation who have recently been giving the theater another go. Glenda Jackson has starred on Broadway two seasons running (currently as King Lear and last year in Edward Albee’s “Three Tall Women”), while Diana Rigg, Eileen Atkins and Vanessa Redgrave have all done shows on one side of the Atlantic or the other in the past season.

In her last London outing, as the mysterious title figure in Albee’s excellent “The Lady From Dubuque,” Ms. Smith didn’t appear until just before the intermission — and that was in 2007. Does she still have enough stamina? Mr. Hampton’s script plays ingeniously with our concerns right at the start. 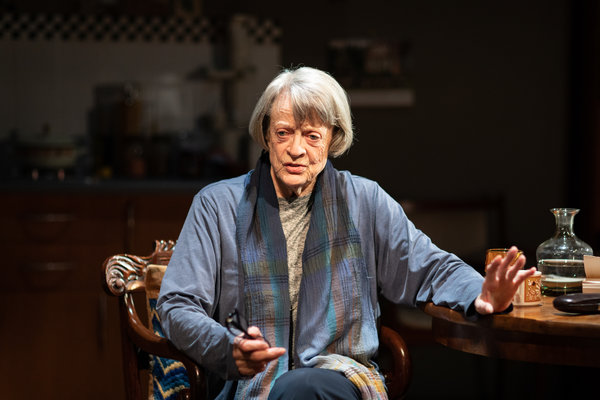 Pomsel, it seems, tends to forgets things, so you pause for a second to consider whether the actress playing her might, too. “Let’s see how it goes,” the modest-seeming woman seated onstage says to conclude her introduction, before launching into her own narrative, during which she never once leaves her chair her or even reaches for water. (A pair of tightly clutched spectacles is Ms. Smith’s only accessory.)

The strange and singular life of an unremarkable woman in remarkable times was chronicled in an Austrian documentary of the same name, filmed when its subject was 103. (She lived to be 106.) Pomsel was born into an ordinary German working-class family. As a stenographer for the Nazi propaganda ministry, she had a ringside seat to observe the workings of the Final Solution, and after World War II, she spent five years as a Russian prisoner of war, when she was held for a time in Buchenwald.

Boyfriends appeared now and again over the years, as did several named friends, one of whom, Eva, a Jew, died in Auschwitz. But Pomsel mostly carried on with just herself for company: The result allows Ms. Smith to communicate a sense of loneliness that she also brought to her indelible turn in Alan Bennett’s “Talking Heads.”

What did this equivocal witness to history — Goebbels is said to be sartorially splendid one minute and a “demented midget” the next — make of such seismic events as they were happening? Pomsel may refer to herself more than once as stupid, but “A German Life” is smart enough to ponder whether that’s a legitimate defense, either then or now.

Speaking in a gentler vocal register than the querulous pitch she can adopt on cue (as in “Downton”), Ms. Smith never overplays her hand, preferring to keep us guessing as she moves toward and away from any real grasp of events. “I knew no more than the local greengrocer,” she insists — the words “concentration camp” merely a synonym for “re-education,” or so she thinks at first. But with advancing age comes clarity of sorts from an unreliable self-chronicler whom this mercurial performer and her observant director, Jonathan Kent, bring brilliantly to the boil.

By play’s end, Pomsel isn’t convinced there is a God, but she believes thoroughly in evil. And as Anna Fleischle’s gently sliding set moves ever more downstage, as if to bring Ms. Smith into the live equivalent of a movie close-up, one particular sentence from earlier in the play resounds afresh. That is Pomsel’s rumination about “the things you can’t remember, and the things you’ll never forget.” Count this actress’s performance among the latter.

Katherine Kingsley doesn’t have anywhere near the profile or résumé of Ms. Smith, but the fast-rising actress excelled as a high-style vulgarian in the recent sequence of Harold Pinter one-acts here. Having also starred in many a London musical, she is in prime form once again in the distinctly nonsinging role of Marlene in “Top Girls,” the 1982 play from Caryl Churchill that is being revived through July 20 at the National Theater.

”Top Girls” was famous when it premiered for skewering the political top girl of the age, namely Margaret Thatcher, but the director Lyndsey Turner’s production suggests this spiky play’s applicability to Brexit-era Britain and to families poleaxed by political differences, not just those of money and class.

The opening scene remains an extravagant wonder in its fantastical bringing together of women throughout history (a pope and an explorer among them) for a dinner party presided over by the successful but hard-bitten businesswoman Marlene, whom we later get to know at work and at home. Ms. Kingsley deftly navigates the shifts in both style and tone and gets a great laugh early on when she demands profiteroles for dessert “because they’re disgusting.” In lesser hands, Marlene might be, too, but Ms. Kingsley makes of Ms. Churchill’s antiheroine a blowzy, sharp-witted delight.

A German Life. Directed by Jonathan Kent. Bridge Theater, through May 11.
Top Girls. Directed by Lyndsey Turner. National Theater/Lyttelton, in repertory through July 20.