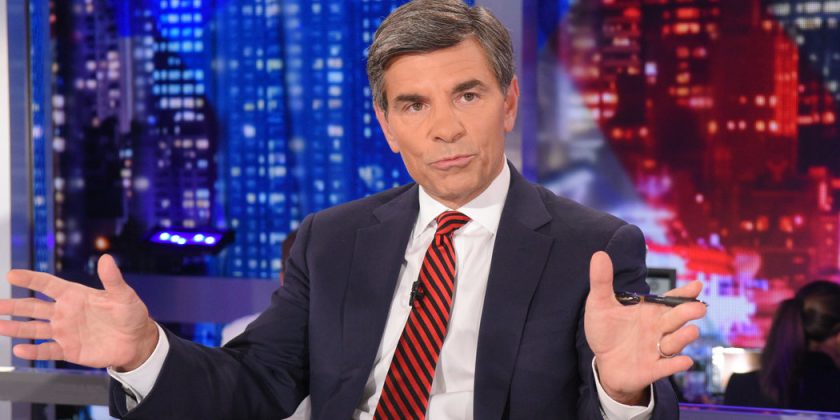 The midterm election coverage began with intimations that the Democrats might unleash a “blue wave.” It proceeded, in early evening, with James Carville soberly declaring on MSNBC, “It’s not going to be a wave election.” It ended, after a re-reversal of the narrative, with cable news panels arguing over what the definition of “wave” is.

I will leave the assessment of any wave, its magnitude and its color, to the pundits. But there were all kinds of waves pouring from the TV on Tuesday night: waves of data, waves of narrative, waves of nausea and/or relief.

The networks agreed that the 2018 election would be momentous: a “verdict,” Wolf Blitzer said early on CNN, on President Trump. But it would come from millions of jurors in thousands of cases.

As the returns started rolling in, the analysts told a zigzagging, roller-coaster story of just what decision the jury had rendered: who was doing well and badly, who should be elated and devastated.

A presidential election is a vast thing, but it has simple antagonists, a winner and a loser. A midterm is an enormous ensemble drama, with dozens of characters to juggle — this one having introduced numerous viral-video sensations (some complete with nicknames, like “The Iron Stache”) alongside the long-running characters.

On every network, the uncredited co-host was the ghost of 2016, in which journalists were left flat-footed, scrambling for a coverage Plan B, by Donald J. Trump’s unexpected win. “You can just feel 2016 washing back over you,” Rachel Maddow said Tuesday on MSNBC as the first tantalizing results came in.

That may be one reason network analysts were cautious in drawing even minimal conclusions about who in the early returns was doing well or badly, beating or failing expectations. (“Expectations” often trump actual numbers in elections coverage; it’s as if you covered football games not by giving the score but by saying who beat the point spread.) 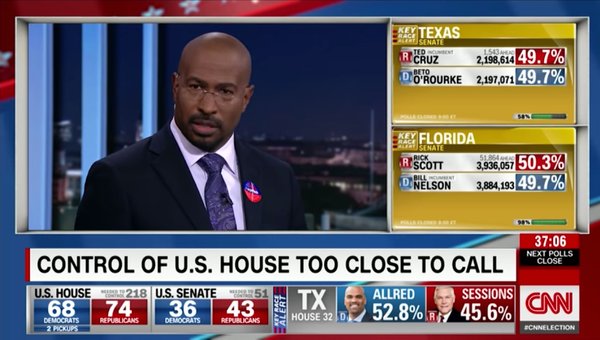 In some cases, they outsourced the conclusion-drawing to algorithms. As this newspaper has done, several networks had their versions of graphs or “needles” pointing to the percentage chance of a flip in the House of Representatives, which at some points showed wildly different odds.

The machines were not shy, and they were cruel. On ABC, Nate Silver of the website FiveThirtyEight showed his outlet’s real-time House-control meter, which began with Democrats’ chances in the 80-plus percent range, then cannonballed off a cliff to give Republicans the advantage, then sharply re-reversed itself in line with the coalescing ballots.

“If that was an E.K.G.,” the ABC host George Stephanopoulos said, “Democrats, it’s giving them a little bit of heart failure.”

Election nights these days can be a little like getting a diagnosis from doctors with great machinery but a mixed bedside manner, getting lost in the test results while you think: “Cut to the chase, Doc, am I going to live?”

Network election coverage has gotten astonishingly granular. On the giant touch screens, the likes of CNN’s John King and MSNBC’s Steve Kornacki are able to zoom in, by state, by county, by precinct — by 2020, you can assume someone will be zooming in on your kitchen.

But data doesn’t automatically equal understanding. And when a flood of it comes in too fast to contextualize, it becomes just the opposite. The news channel screens were drowning in underexplained numbers, like someone had run over an adding machine with a lawn mower.

It is something to watch King work; he enters a kind of entranced flow-state as he communes with his magic wall — swiping among counties, across the continent, backward and forward in time — but you can start to feel like an outsider butting in on their private communication.

As the map started to fill in, the interpreters became more useful, finding pockets of outstanding votes in far-flung congressional districts. (At one point, though, Kornacki’s touch screen went glitchy on MSNBC. “Just smack it,” Brian Williams offered. “That usually works.”)

It was finally the bank of humans at the Fox News decision desk who called the switch in House control for the Democrats.

This was a peculiar climax for a midterm race that was not just covered heavily by cable news but also sometimes fought by it — especially on Fox, which served as press agent for the Central American caravan, capped off with the president’s calling Sean Hannity on stage at his closing-day rally like a delighted fan at a Bruce Springsteen concert.

While news anchors like Fox’s Chris Wallace pointed out that losing the House was not exactly a boon for the president, Fox’s panelists focused on the base-galvanizing effects of the president’s rallies — because they were often carried live on the network, a win for the rallies was a win for Fox.

The bitter aftermath of the long fight was felt everywhere. In the 9 p.m. hour, Van Jones, the progressive panelist on CNN, reacted to the news of the moment — Democrats trailing in the key Georgia and Florida races and, as it briefly looked, possibly falling short in the House — with “This is heartbreaking.”

By just past 11, with the House called and Democrats on a run of good news, he updated: “My heart has been restored!”

As the night went on, Democrats’ advantage in the raw popular-vote numbers, and their gains in the House and governorships, looked stronger and stronger. But there was also an intense investment in specific high-profile races in which Democrats came just short, or appeared to.

This had the effect, on left-friendly MSNBC, of a bittersweet mood even among a night of successes for what many of its viewers would consider the home team. “We’re just going to have to ride it out to the bitter end,” said the network’s Joy Reid, reporting from an event for Andrew Gillum, who sought to be Florida’s first African-American governor. The crowd behind her cheered, not because of election returns but because they’d seen MSNBC on the monitors.

The denouement of an evening of something-for-everybody came around midnight, with MSNBC carrying the concession speech of Representative Beto O’Rourke of Texas, the viral-sensation Democratic Senate candidate. “I’m so proud of you guys,” he told his supporters, adding a not-for-prime-time intensifier that the network failed to bleep.

“Sorry about the F-bomb,” Mr. Williams said afterward. After a night of election-return whiplash, I doubt it was the first one heard in America’s living rooms.