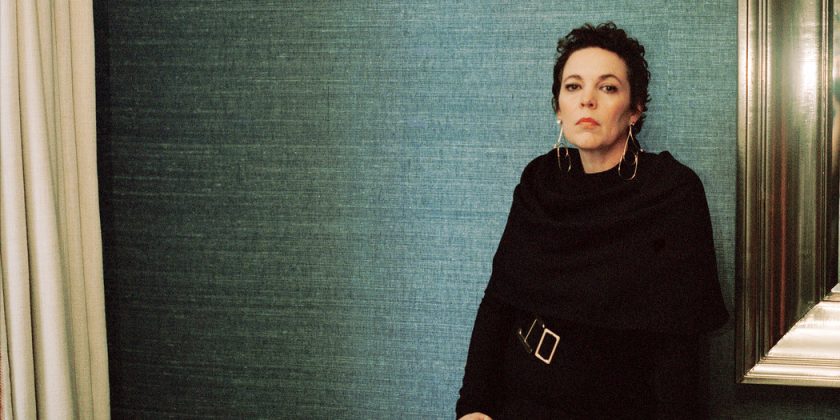 LONDON — Olivia Colman does not have a process. She is apologetic, since she understands that this makes for uninteresting conversation about the many fascinating characters she has played — most recently the imperious, needy, vulnerable, monstrous Queen Anne in Yorgos Lanthimos’s “The Favourite,” for which she is hotly tipped as a best actress Academy Award nominee.

“I’m really sorry,” she said, squirming slightly, during a recent interview at a London hotel. “Let me think.” She brightened up. “I ate a lot to put on weight,” she said. “Does that count?”

Colman, 44, is unshowily famous in her native Britain, where she is known both as a comedy stalwart (“Peep Show”) and as a forceful dramatic actor (“Tyrannosaur”). She is fairly often described as a national treasure, so there was general rejoicing when it was announced that Colman would take over the role of Queen Elizabeth II from Claire Foy in coming seasons of the Netflix series “The Crown.”

Until now, she has been relatively unknown in the United States (although connoisseurs of prestige British television will know her from “Broadchurch” and “The Night Manager”). As she points out, she has never been the type to be cast in glossy leading lady roles. But “The Favourite,” which premieres Nov. 23, bagged the Silver Lion Grand Jury prize at the Venice Film Festival, won Colman the best actress award and has already garnered serious Oscar chatter, dragging her squarely into the spotlight even before her coming star turn in “The Crown.”

The spotlight is not where she likes to be. “I hate the loss of anonymity,” she said. “No one teaches you how to deal with that. I now just tend to stay home because it’s so weird not to be on an equal footing with people. They know your face, and you don’t know them.”

“It’s not that people aren’t lovely,” she added, “but it’s harder to deal with than you imagine.”

Colman is the most ordinary extraordinary person you have ever met. She is smiley, charming, apologizes frequently and plays down her talents at every opportunity. Her colleagues trip over their words trying to find enough adjectives to describe her likability, decency, kindness, her friendliness to the entire crew on any shoot, her lack of diva-dom. After several attempts at describing how much she adored Colman, Emma Stone — one of her co-stars in “The Favourite” — gave up. “You can tell I’m in love with her,” she said. Rachel Weisz, her other co-star, described her as “a proper delight — and with a very filthy sense of humor.” 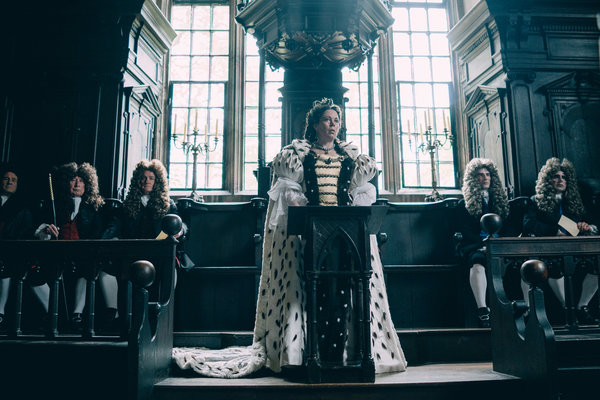 But Colman has no trouble being less than lovable on screen. In Paddy Considine’s “Tyrannosaur,” she played a meekly religious, abused wife; in “Fleabag” a hilariously poisonous stepmother; in “Run,” a tough-as-nails inner city mother; in “Broadchurch” she was an often tearful, often irritable, willfully unglamorous police officer.

She also seems to have little vanity about how she is perceived. For the role of Queen Anne, where she is frequently shown in deliberately unflattering scenes, she put on 35 pounds without a murmur.

“I much prefer these sorts of roles because there is no pressure to be something you are not, and I am obviously not glamorous,” Colman said. (In fact, in the wake of a photo shoot, she did look glamorous, dressed in a belted black dress, high heels and long earrings. “I’m more a jeans and sweater-with-something-spilled-on-it person,” she said as she arrived.)

“For Anne, I wasn’t meant to look nice or be nice, and it was liberating and brilliant,” she said. “I find it more embarrassing to try to look good. I think I’ve been fortunate to be cast in these roles, because it’s very difficult for young women or men who are seen in one way, and then they are not allowed to age.”

In “The Favourite,” Colman’s Anne is jowly, lumbering and capricious; a willful child-woman who screams for attention and vulnerably displays her chronic insecurity and the deep unhappiness occasioned by losing 17 children to miscarriages, stillbirth and childhood death. Anne ruled from 1702-14, during a turbulent period that saw the incorporation of Scotland and England into the single state known as Great Britain, and the country’s long involvement in the War of the Spanish Succession. But the movie focuses on politics only to the extent that they influence the stratagems of the Duchess of Marlborough (Weisz) and her cousin Abigail Hill (Stone) as they scheme for the favors (all of them) of the Queen.

In a telephone interview, Lanthimos said that after seeing Colman’s performance in “Tyrannosaur” and working with her on “The Lobster,” he couldn’t think of anyone else to play Anne, and had shifted the schedule to accommodate her.

“I don’t think I would have made the film without her,” he said. “That role is quite difficult, quite complex. It needed a lot of different qualities from an actor, the ability to alternate between different states at different times. It has a lot to do with instinct. She reads the lines and goes to the right place without thinking about it too much.”

Colman says she doesn’t think about it at all. She hates rehearsal periods when actors and directors break down the script and motivation. “For me, when I really love a script, it’s visceral,” she said. “I can’t explain why, but I feel it; I want to say those words, be that person.”

Growing up in the city of Norwich, in the east of England, Colman said she dreamed of being an actor from a young age, but “it was a secret dream, like talking to animals.” Instead, she went to teacher training college in Cambridge, where she successfully auditioned for Footlights, an amateur dramatic club run by Cambridge University. There she met her future husband, Ed Sinclair (with whom she has three children), and followed him a year later to the Bristol Old Vic drama school.

After graduating in 1999 she went to countless auditions and didn’t get a single job for a year. “My mum had said, ‘You’ll probably give it a year.’ And I said, ‘No, I’ll give it 10 years,’” Colman said, betraying a smattering of steely resolve. A trickle of bit parts followed. She worked as a secretary — “not a very good one, although I was cheery” — and a cleaner. Although discouraged, she never thought of giving up. “I never wanted to do anything else,” she said. Then with sincere Colmanesque self-deprecation: “Also, I’m no good at anything else.”

Her breakthrough came in 2003, when David Mitchell and Robert Webb, fellow actors at Footlights, asked her to play a central role in “Peep Show,” a series that developed a cult following over nine seasons. Her talent for deadpan comedy didn’t go unnoticed, and Colman began to pick up bigger roles, mostly in sitcoms and comedies.

“Tyrannosaur,” the first feature film directed by Mr. Considine, an actor, changed everything for Colman, who was cast as a physically and psychologically abused wife who forms an unlikely friendship with a violent widower. “I always wanted to do these kinds of dramatic roles, and I always knew that no one saw me that way,” Colman said. “Good old Paddy.”

That led to “Broadchurch,” and the role of Detective Sergeant Ellie Miller, one of the lead investigators (alongside David Tennant’s Detective Inspector Hardy) in a search for the killer of an 11-year-old boy. The series was a huge success in Britain and abroad, and even though Tennant was the bigger name, Coleman’s portrayal of a woman enduring the harrowing personal consequences of the investigation made the series hers.

Jodie Whittaker (“Doctor Who”), who played the bereaved mother Beth, Ellie’s best friend, said that Colman was “one of the only actors who can make you laugh and cry at the same time.”

“She brings such humor and vulnerability and playfulness to everything,” she said.

Colman has subsequently starred in several large-scale projects, notably “The Night Manager” (for which she won a Golden Globe) and the coming BBC production of “Les Misérables.” But the call from “The Crown” still came as a shock, she said.

“I was such a massive fan of the show, and I thought Claire Foy was just breathtaking,” she said. “I no idea they were going to recast for season 3 and 4, so hadn’t thought about the role at all.” She did an imitation of her agent calling her and trying to be discreet while she shrieked “the Queen?!” with her phone on loudspeaker.

Remembering the first meeting with the producers, she laughed. “I was very uncool when I went to meet them,” she said. “I just said, ‘Oh yes please,’ and they were totally taken aback.” The role of the young queen brought Foy a Golden Globe and an Emmy, among other awards, and international fame. It was hard to imagine filling her shoes, Colman said; her solution is not to think about it and “just plow on.”

But her no-process approach had to be modified here, she admitted. “The research department is a massive operation,” Colman explained. “I absorb best through watching videos, and I’ve spent hours and hours doing that.” She has also spent a great deal of time with voice coaches perfecting the queen’s voice and accent, and with a movement coach who has helped her master a particular posture and way of walking. “I walk a bit like a farmer, not a queen, and I’m not a very good physical impersonator,” Colman said. “So there is a dollop of artistic license.”

In 15 years Colman has moved from the broad comedy of “Peep Show” to the high seriousness of “The Crown,” and rumors of an Academy Award nomination for “The Favourite.” “I don’t know what to do with it,” she said. “Talking about the Oscars seems like a silly dream. If you wake up one day and it hasn’t happened, you’ll be cross for feeling disappointed.” Colman seems constitutionally wired for disappointment avoidance. “I still worry that I won’t have work,” she said, adding that she felt she should make hay before it all went to hell. (She used a stronger word than hell.)

She made a series of impressively unregal grimaces, eyes widening, mouth pulling down, nose wrinkling. “You know,” she said Englishly, “don’t behave badly; they may not ask you back.”