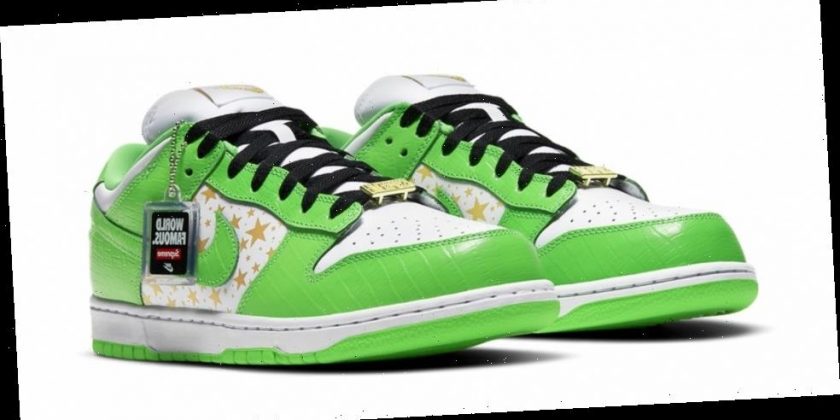 After official images of Supreme and

This low-cut SB Dunk‘s eponymous “Mean Green” hue appears on the croc leather mudguards, eyestays, Swooshes, heel overlays and tabs. Each piece has a sheen to it that’s almost patent leather-like, which provides a stark, maximalist contrast with the simple white toeboxes, heels and puffy tongues. Quarter panels are white in shade as well, but are equipped with a vivid gold star print, pulled directly from Supreme’s legendary 2003 SB Dunk High collaboration. That’s not the only piece of Supreme and Swoosh history either, as gold “SUPREME” lace deubres sit atop the black laces. Rounding off the look is gold branding on the tongue tag and heel tab, red insoles with a cut-off “SUP” hit and white midsoles/green outsoles.

Though a release date for the Supreme x Nike SB Dunk Low “Mean Green” has yet to be announced, it’ll likely arrive as part of the brand’s forthcoming SS21 collection alongside “Black/White,” “Barkroot Brown” and the aforementioned “Hyper Blue” colorways. Of course, Supreme has played a major role in the rise of the SB Dunk Low as well — it was the model’s first official collaborative partner in 2002, creating iconic “White Cement” and “Black Cement” colorways before producing a “Red Cement” in 2012 and dropping three jewel Swoosh-equipped styles in 2019.