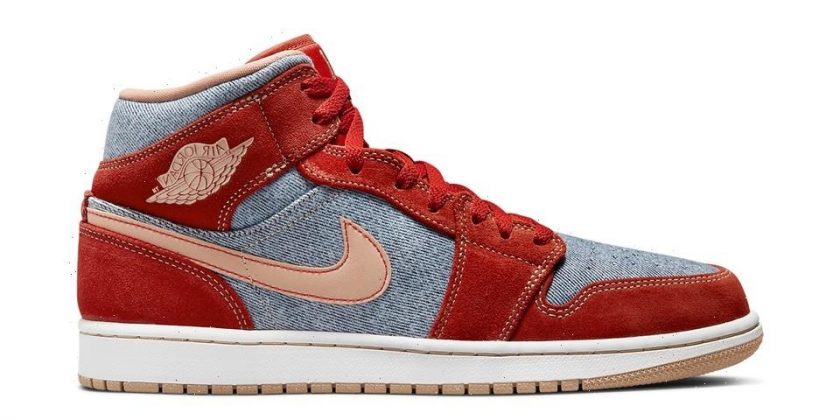 The (Air Jordan 1) mid is selling, so Jordan Brand is set to release a new “Denim” colorway loosely inspired by a famous Levi’s collaboration from 2008. Boasting potent colorblocking and unique alternate materials, this Air Jordan 1 Mid may not be nearly as rare as its predecessor, but its combination of style and accessibility still have the potential to make it a modern-day hit.

Blue denim that provides the shoe with its moniker is present on toeboxes, quarters and collars alike. It’s accented by red suede mudguards, eyestays, heels and collar flaps. Tan is introduced into the mix on Swooshes, the collar’s ball-and-wings logo, contrast stitching and trim for a potential nod to the leather tags often found on the rear of jeans. A tan Jumpman logo is embroidered on the red nylon tongue, and down below the look is rounded off by white midsoles that sit atop classic gum outsoles.

A release date for the Air Jordan 1 Mid “Denim” has yet to be officially announced by Nike, but it’s likely arriving at retailers sometime this summer. The MSRP will be set at $115 USD.

For more news from the world of Air Jordan take a look at the new Air Jordan 4 “Red Thunder,” which is rumored to release this fall.
Source: Read Full Article