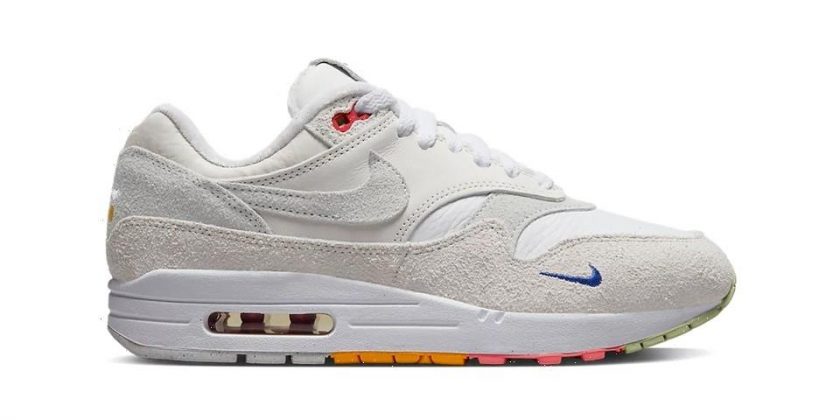 Nike has just presented a fresh iteration of its Air Max 1 silhouette, and now the sneaker is coming packed with multi-colored outsoles and pom-pom laces.

For the Swoosh, 2022 has been a year packed with anniversaries for several of its mainline silhouettes. One of which has been the 35th anniversary of the Air Max 1, and with that, the shoe has dropped in various new iterations, with stand-outs coming in the form of the new “Magma Orange,” “Ale Brown,” and the “Liverpool” edition made in collaboration with Lebron James.

Now, Nike is pushing one of its cleanest editions of the year, and it’s been elevated with a playful edge. This new version of the sneaker has been made with a blend of tumbled, smooth, and suede overlays, while hues of white, and light grey take over the main foundations of the design.

Furthermore, the color scheme has been leveled up with a selection of colorful accents which include tones of green, pink, and orange. The latter can be spotted on the outsole, heels, and insoles while a small speckle of navy blue is used on the additional mini Swooshes and tongue branding. Rounding off the design, puffy white pom-pom laces are included alongside intricate red and silver accents next to the ankle.

You can take a closer look at the new Air Max 1 “Neutral Grey” above and it will be available on the official Nike website and with select retailers in the coming months.